At 12:00 pm this afternoon, August 18th 2017, Mayor Rick Kriseman will announce that the city has chosen, out of four bids, to award Callaloo Restaurant the bid to open in the historic Manhattan Casino on 22nd St S. The bids have caused controversy amongst the African American community living on the south side who want to maintain the integrity and history of the area. Tampa Bay Times Article on the Controversy.

**Update: We received some photos from an attendee at the event, Hal Freedman. A sampling of some of the Callaloo menu was served and is pictured below. Thank you, Hal Freedman for the photos!

Callaloo will be a southern restaurant with Caribbean fusion influences. Comfort food with an innovative twist. The partners of Callaloo are Ramon Hernandez, owner of Pipo’s Cuban Cafe and Pipo’s To Go; Vincent Jackson, former wide receiver for the San Diego Chargers and the Tampa Bay Buccaneers who also owns seven restaurants across the country, two of them in Tampa: Ferg’s Live and Cask Social; Mario Farias of Farias Consulting Group and great activist for the city of St. Petersburg; And Executive Chef of Callaloo, Gary Moran, former owner of Wimauma restaurant in Tampa and prior to that Chef at the famed Tavern on the Green in New York City.

The partners plan to use the entire space, operating the 140 seat restaurant downstairs and utilizing the 300 seat upstairs space for events. The 3,000 sq ft kitchen will not only be used for Callaloo but will become the new home of operations for Pipo’s catering.

Plans are also in the works to open ten more Pipo’s To Go cafes throughout Tampa Bay by the end of 2018 and to use the 4th St Pipo’s To Go restaurant as a model moving forward.

Last night at an event celebrating the launch of St Pete Life Magazine, Mario Farias was spotted talking with Susan Robertson, could it be possible they are considering her for an open Sales Director position? We shall see…she did a wonderful job as the Director of Marketing for the Museum of Fine Arts for the past three years and before that she spent twelve years at The Pier as the Marketing Director in charge of all marketing, public relations and events.

The partners anticipate that Callaloo will be ready to open by the end of October. All of the equipment is already in place and no build out is necessary, which means no permit delays. All that is needed is some modification of the kitchen. Their contractors have already drawn up the plans and they are ready to go. All they were waiting on was the Mayor’s decision.

History of The Manhattan Casino (Credit to stpete.org)

MORE FOODIES READING  Get “Hooked Up” at Swah-rey Dessert Bar

Built in 1925, the Manhattan Casino is significant for its contribution to entertainment and the culture in the African American community for more than forty years. Some of American music’s most legendary performers played at the Manhattan including James Brown, Louis Armstrong, Fats Waller, Duke Ellington, Count Basie, Lionel Hampton, Cab Calloway, Ray Charles, Nat King Cole, Sarah Vaughn, Fats Domino and the Ink Spots.

The property is also significant for its association with Elder Jordan, a local African-American entrepreneur whose business interests were broadly varied. Elder Jordan and his sons contracted in 1925 with R.L. Sharpe to build a 12,000 sq. ft., two-story Manhattan Casino, which first opened as an entertainment facility named the Jordan Dance Hall in 1931. Later the dance hall became known as the Manhattan Casino; and, during segregation the Manhattan was the place for cultural and social entertainment similar to what the Coliseum provided to the white community.

The Manhattan Casino was a showcase for local African American artists as well as a haven for traveling African American entertainers who would stop in St. Petersburg during their tours. After the era of the big bands, the Manhattan Casino hosted dances featuring local artists; rock and roll and blues singers popular in the 1960’s also performed at the Casino. Goldie Thompson, local minister and radio personality, booked religious programs at the Casino, as did Father Divine, a spiritualist. The venue closed its doors in 1968. 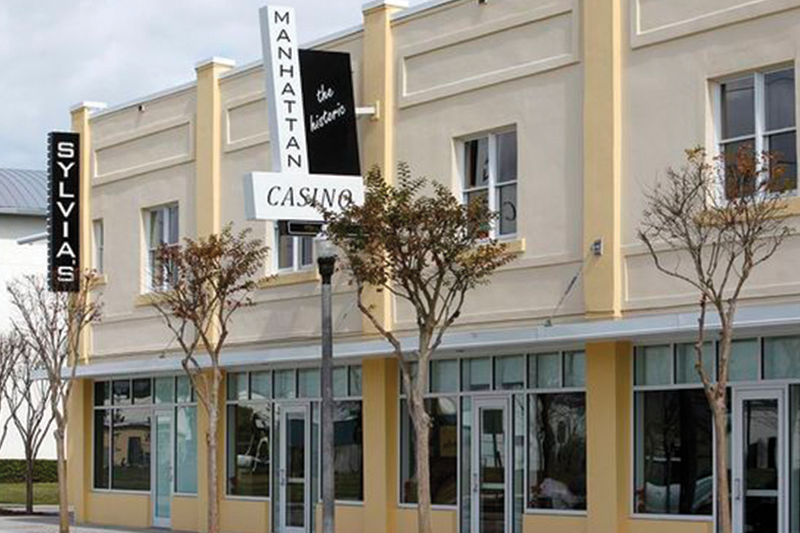 Mayor Kriseman awards the bid to Callaloo to opening the Historic Manhattan Casino. 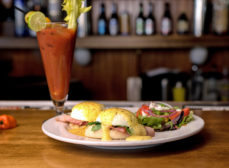