Owned by a local fisherman, Snapper’s Sea Grill on St. Pete beach is a local hotspot. As you walk up to Snapper’s there are lit tiki torches and mature palm trees lining the walkway bringing you to the front doors, which are made of beautiful stained glass in the shape of fish swimming in the ocean. When you walk inside dark wood and etched glass artwork continue the sea life theme.

Snapper’s does not accept reservations, so we showed up on a Saturday night at 7pm hoping the wait would not be too long. We were told it would be about 35 minutes (not bad) and were directed to their “waiting bar” outside. It was a cool, brisk night out, but the waiting bar had heaters and casual seating nearby and we were set. Although we were lucky we didn’t have to wait as long as we were told before being sat. Once we all had a drink in hand, our table was ready.

After some mulling over our menus, my friends and I did not hold back from ordering. We started with four appetizers: Fried Brussels Sprouts, Zucchini Sticks, Gulf to Bay Oysters, and a special on the menu, a Deconstructed Tampa Roll.

The Fried Brussels Sprouts are fried, tossed in a ponzu sauce and topped with crispy onions. It’s hard for a restaurant to perfect fried Brussels, but Snapper’s did it. They were crisp, delicious, and paired wonderfully with the crispy onions. The Zucchini Sticks fell in line with the Brussels, also being perfectly crisp. They came with “Tiger Sauce” on the side, which we figured out was a type of horseradish aioli. While I enjoyed the Tiger Sauce, some of my guests found it to be too potent with horseradish and the server was kind enough to bring out another one of their dipping sauces, a chipotle aioli. The chipotle aioli paired quite nicely with the dish. I highly recommend asking for a side of it along with the Tiger Sauce when ordering the Zucchini Sticks.

Oysters are one of my top 5 favorite foods, and the preparation of the Gulf to Bay Oysters at Snapper’s did not disappoint. They are topped with a mixture of sautéed spinach, bacon, caramelized onions and Boursin cheese, then baked and finished with a spicy tomato jam. The sweet and spicy flavors along with the creamy texture complemented each other very well and made for a decadent bite. I do believe they could have backed off slightly on the amount of tomato jam on top, but it did not completely distract, so I was still very happy with them.

Unfortunately, while it looks enticing, the Deconstructed Tampa Roll let us down. It was lacking depth and flavor. But hey, you can’t win them all! We still ate it, so it truly was not awful.

Next, we were on to our entrees. Out of the four of us, two ordered seafood dishes and two ordered steak dishes. I was a little torn between ordering fish or steak, but after hearing that 1200 Chophouse down the street is a sister restaurant of Snapper’s, I decided to give it a shot. I chose to go with the “In House Cut” Rib Eye. When it came to the table, I had to pinch myself to see if I was dreaming. The steak was the biggest steak I have ever been served (I ended up making 4 meals out of it), and it was perfectly cooked.

Another one of us got the Filet of Beef Tenderloin which is a choice cut filet, topped with blue cheese crust over a roasted garlic demi glace and she was very pleased with it, as well.

As for the seafood dishes (I mean that’s what we’re really at Snapper’s for right?), they left us wanting to come back for more. The first of the two dishes – Snapper’s signature Stuffed Gulf Grouper comes prepared with a shrimp, scallop, and crabmeat stuffing over a locally caught Grouper filet and finished with a Champagne cream sauce. While the dish sounds heavy… and is heavy, the Champagne sauce and fresh Grouper added a lightness to the dish that rounded out the heaviness of the cream and stuffing.

The other seafood dish we ordered was the Risotto Oceana. This comes with a roasted garlic, creamy Parmesan risotto topped with pan seared diver scallops, jumbo shrimp, lemon-basil oil, diced tomatoes, and leeks. The risotto, scallops, and shrimp were flawlessly cooked. The risotto creamy and cheesy, and the scallops beautiful and golden. All the flavors came together to create the perfect bite… or 20 bites.

I went in to Snapper’s with high hopes and I did not leave let down. My next stop is to try their sister restaurant 1200 Chophouse after the scrumptious Rib Eye I just had. I have high hopes that it will be just as good as Snapper’s. 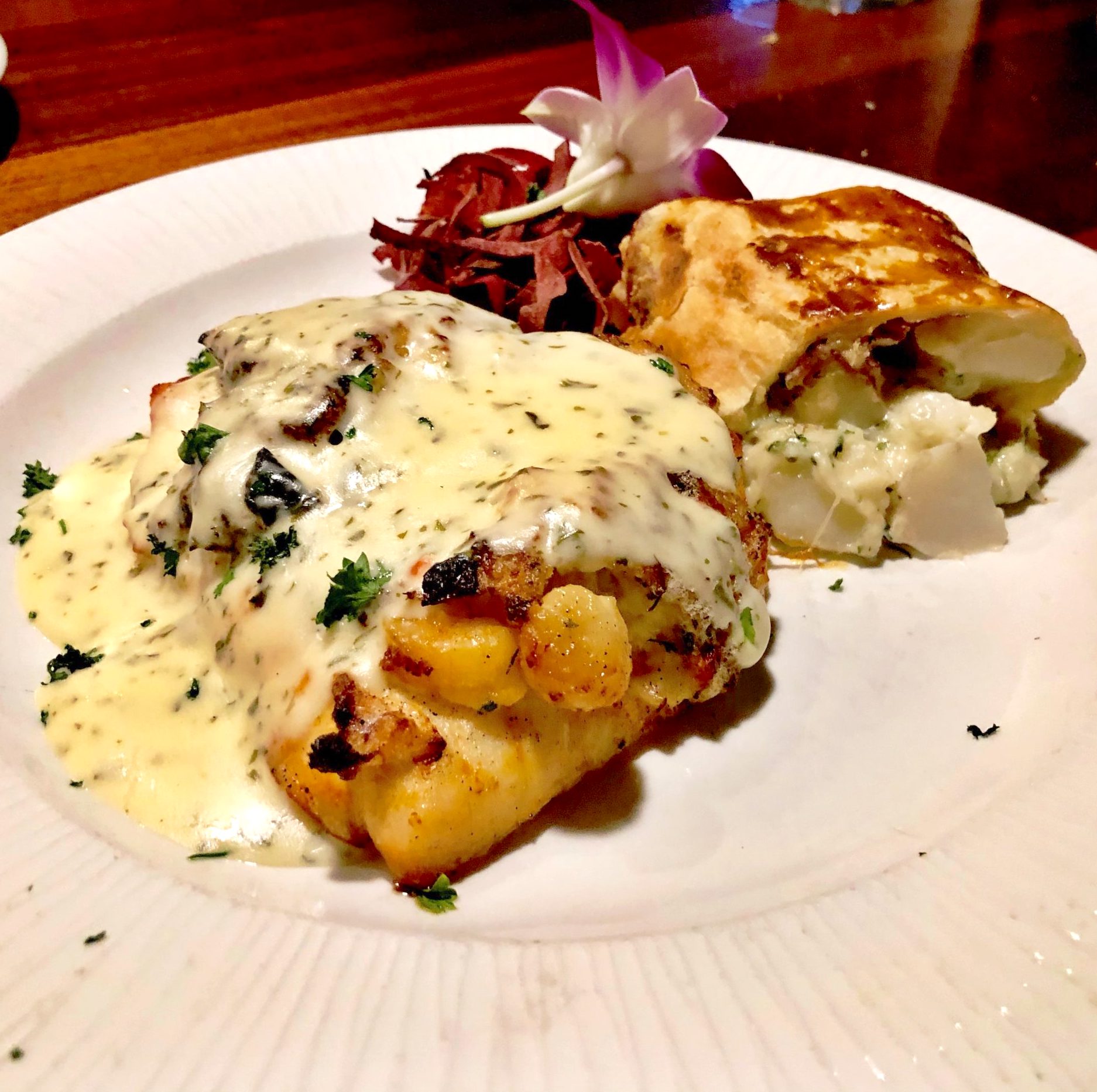 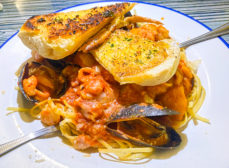