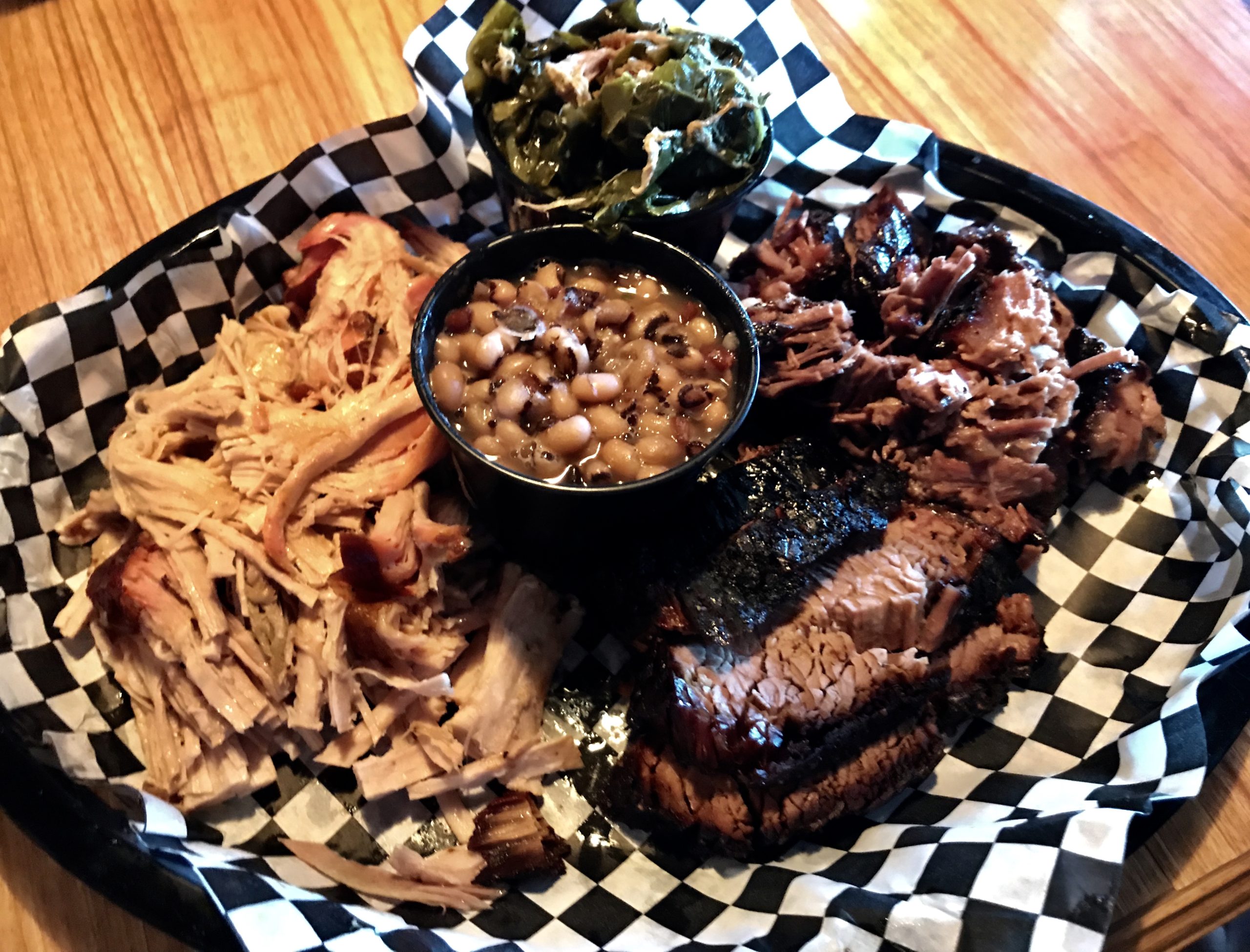 Thursday, January 25th 2018, Kevin and I ventured out of the 33701 to find some good BBQ. We had ordered previously from M-N-M through Delivery Dudes and found it to be quite good, but visiting a restaurant and eating there is usually quite a different experience than delivery.

M-N-M is located off of 16th St N just past 28th Ave N. A little off of the beaten path, but not farther than a 5 – 10 minute drive from downtown AND there is available parking. We found the interior vibe to be very inviting, cozy and comfortable.

The owner, Mike Silverstein (who is a St Petersburg local having been here since he was two years old), has been catering in St Pete since 2001 and has been at the Saturday Morning Market since its inception 15 years ago. He decided just last year to take his very popular mobile BBQ and open the brick and mortar restaurant. M-N-M stands for Mike and Marcia, his wife, and he said, “I’m the boss when she lets me.”

M-N-M offers eight local craft beers on tap along with Bud Light and Yuengling. I ordered the Cream & Sugar, a Coffee Porter from Cycle Brewing and Kevin ordered the Florida Cracker a wheat ale from Cigar City Brewing. I don’t usually drink beer but when I do I like it to be great beer. I really enjoyed the Cream & Sugar! It was Kevin’s favorite of the two as well. It wasn’t sweet and did have a coffee flavor that was not overwhelming.

From the menu, we ordered the pulled pork and the beef brisket along with a side of collard greens and black eyed peas. My mother is from Georgia, so I love the southern sides. When we ordered the delivery our initial reaction was that we loved the meat, but I wasn’t bowled over by the sides, so I wondered what I was going to think eating at the restaurant. The pulled pork was a tad on the dry side, but overall was very tasty especially with my favorite Carolina mustard sauce. The Brisket was exceptional. We learned that it can be ordered one of two ways: lean or moist (which is how they order it in Texas).  Both were some tasty brisket, but the moist was our favorite, being that it is a bit fattier. Thus it had more flavor and was exceptionally tender.

The collard greens were much better than I recalled from our delivery order especially when you add a bit of the spicy sauce to it. My biggest disappointment was the black eyed peas, which I was very excited about. They definitely needed some seasoning. They did not have any flavor and were a bit mushy. These are things that can totally be tweaked. Mike said that he doesn’t like to add salt. I say don’t be afraid to salt and to season sides. Salt can be a chef’s best friend when used properly. Just adding it after does not have the same affect as cooking with it.

We ordered and paid for what I just wrote about above but Mike also wanted us to taste a few other items which he brought out for us to try. First was a small taste of the potato salad and the cole slaw. You can tell that they are both homemade. I really enjoyed the flavoring of the potato salad and loved that the cole slaw was not swimming in mayonnaise plus it had a great crunch! They could both use some seasoning, but that’s an easy fix. Kevin loved both as is.

Next was a Smoked Salmon, which I thought a bit strange on a BBQ menu. Not being a big fan of cooked salmon, I am not one to be the judge on this one. It was definitely moist, flaky and tender and Kevin enjoyed it all but the bite that I took. The sweet & spicy chili glaze was a nice added twist, and quite tasty.

Who doesn’t love bacon? So mixing it in Mac-n-Cheese definitely elevates this standard dish to a new level! Now that’s adding some seasoning to a side. This side is scrumptious, savory and filling.

So if you’re looking for a quick lunch, you can grab a Chicken or Pork sandwich with cole slaw or baked beans for $7 or for a delicious, relaxing BBQ dinner, get yourself on over to M-N-M BBQ.