Tucked away in a residential neighborhood in the Tyrone area, and right on the Pinellas Trail, Pesky Pelican offers up some unique St. Louis-style eats that you won’t find anywhere else in St. Petersburg.

Owner, Dan Pemberton, hails from The Gateway to the West where a flood in 1982 sent his house down the river, and had him moving to Ft. Myers. The initial lure to St. Petersburg was that the St. Louis Cardinals used to train here. (They train in Jupiter, FL now.) Like lots of people we talk to, they come to visit, and end up staying.

You could say that Dan is an accidental restauranteur, as it was not something he planned on doing, but then he discovered he loved craft beer, and got into home brewing. He then decided to bring his brewing talents to the public when the building in his neighborhood became available, and The Pesky Pelican Brew Pub was born.

Unfortunately, at the time of our visit, the two commercial beer coolers for the house taps were both broken, and have not been able to be repaired or replaced during COVID-19, so we will have to try the house beers another time.

However, after talking about the St. Louis-style food during our podcast interview with Dan, we were eager to please our palates pronto with some new regional cuisine experiences.

They have a large menu, and there is pretty much something for everyone, so if you’re not a fan of the St. Louis eats, don’t let that dissuade you. We LOVED them!

We started with the Toasted Ravioli – Meat ravioli deep fried & dusted with parmesan cheese. Served with Marinara for dipping. Called “T-Ravs” by St. Louisians, the story goes that a cook accidentally dropped traditional ravioli into hot oil instead of water. The resulting fried ravioli was so well received, they decided to put it on the menu. (More than one restaurant claims to have accidentally invented it.)

I actually like them better than regular ravioli as the texture contrast with the crispy outside, and chewy, meaty inside adds a nice additional mouthfeel. The meat filling is wonderful and savory. The marinara adds some nice high and low notes at the same time.

Dan prefers meat over cheese in his ravioli, and I agree. (Cheese-filled is not offered.)

I think hating it is dumb. You just have to know that it is its own totally unique and different fare. It’s nothing like any other pizza.

We’ve had pizzas with ultra thin crusts before, but what really sets the crust apart on this one is that it is cracker-like-crispy. You can’t bend it like NY pizza, or eat it with a fork like Neapolitan pizza. It would break.

It’s a round pizza, cut into squares, like they do with thin-crust Chicago pizza.

The main thing that really makes St. Louis pizza stand out is that it’s made with Provel cheese, and not mozzarella.

Some say Provel is an acquired taste. I would say whoever says that is not a foodie. Provel is a processed cheese product that combines cheddar, Swiss, and provolone with a touch of liquid smoke. It’s a more dominant flavor than mozzarella, but we really enjoyed it.

Provel cheese also tops the Gerber Sandwich, and is found in the St. Louis Salad, neither of which we tried on this visit. The Gerber is a huge open face sandwich that takes a half section of Italian bread, spreads it with garlic butter, and tops it with ham, and melted Provel cheese. Paprika is sprinkled on top.

We also enjoyed the Syberg Wings, which are based on the immensely popular wings at Syberg’s Restaurant & Bar, a small chain in St. Louis. Syberg’s sells their mustard-based hot sauce online, but Pesky Pelican makes their own using Durkee® Famous Sauce.

We enjoyed the wings quite a bit, and now know why they are so popular. They have a distinctive tanginess, along with a medium heat level with a slightly crunchy exterior, and a hot, juicy, plump center.

For you dessert lovers out there, make sure you try the Gooey butter cake. Pesky’s has won several awards. Like the toasted ravioli, it likely came about by accident. Gooey butter cake is essentially a coffee cake with a sweet, custard-like top layer that is served sprinkled with powdered sugar. It was reportedly created in the 1930s when a local baker mistakenly mixed up the ingredients for a traditional coffee cake.

For any of you foodies out there that haven’t yet experienced the uncommon comestibles born in St. Louis, MO – book yourself a trip out to the Tyrone area of St. Petersburg, Florida for a real treat at The Pesky Pelican Brew Pub. 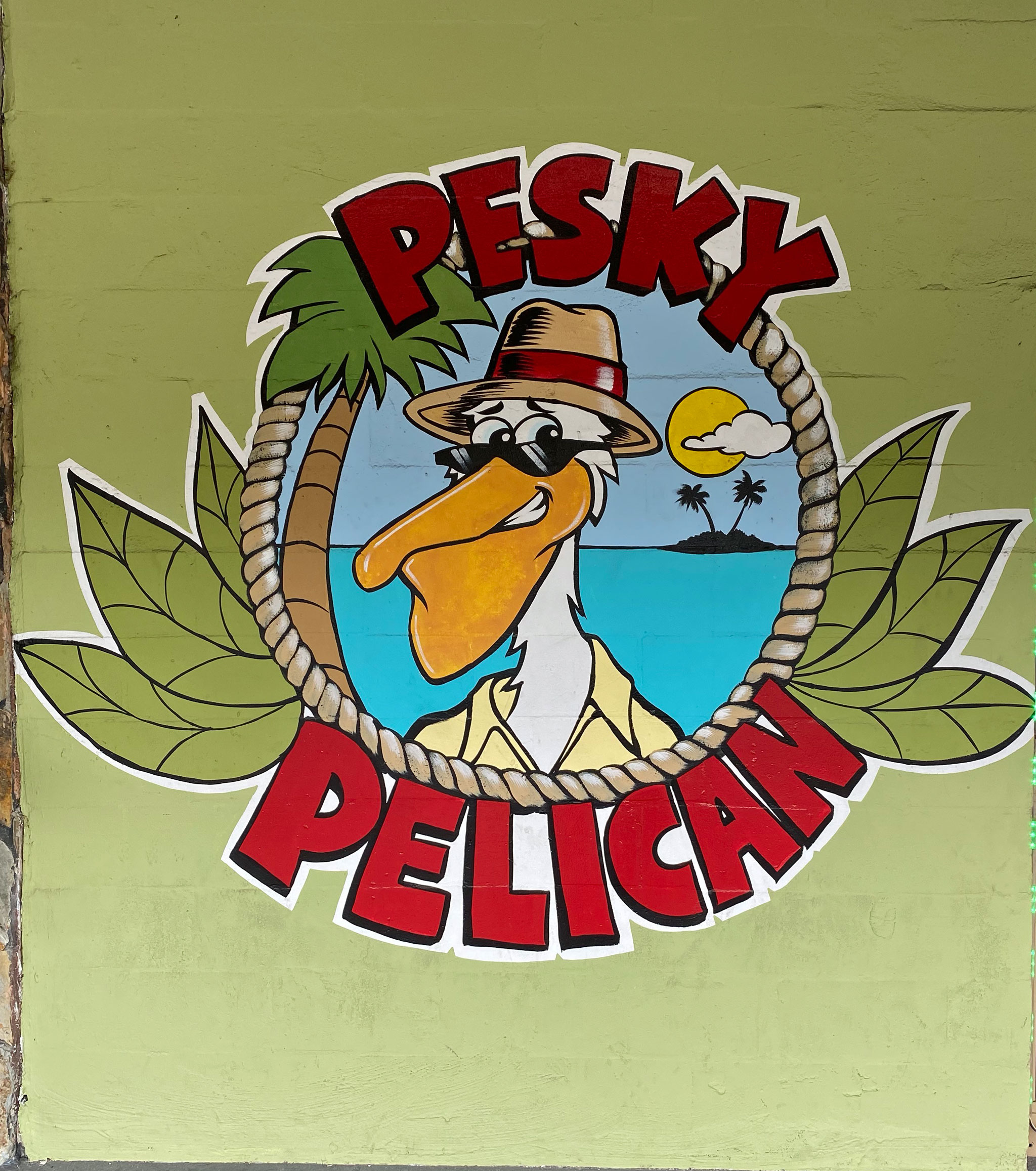 The Pesky Pelican Brew Pub offers elevated pub food with something for everyone, brews their own house beers, and offers exclusive St. Louis-style eats.