On Thursday, January 5th, 2017, Kevin and I had the pleasure of a tour through the Urban Group family which we are calling Urban Assault - St Petersburg Foodies style. We met the founder and owner, Andy Salyards, who gave us extensive background on himself and the concepts and we were accompanied to all locations by the Urban Restaurants Group Marketing Director, Laura Servedio. We also got to meet the General Manager of both Urban Comfort and Urban Brew and BBQ, Caleb Perkins; the Chef at Urban Comfort, Sal Merola; the Kitchen Manager at Urban Brew and BBQ, Chris Gayle; the Pastry Chef & Bakery Chef for Urban Deli and Drafts and for Urban Creamery and also supplies all of the bread to all locations, Matt Dodsworth; and last but not least the Manager at Urban Creamery, Kate Perotti.

It all started with Urban Brew and BBQ. This piece will focus on the formation and motivation behind the second venture, Urban Comfort.

The Birth of Urban Comfort

After Urban Brew and BBQ got to the place where owner, Andy Salyards, did not need to be involved in the day to day operations all of the time, he asked himself, "What next"? He found a property, which used to be a Standard Oil garage in the 1940's and 1950's and had the foresight to turn it into the restaurant we all know now as Urban Comfort. He had to gut the place and said it was a huge project but so worth it. Says Andy, "People have come in talking about how their dad used to work here." 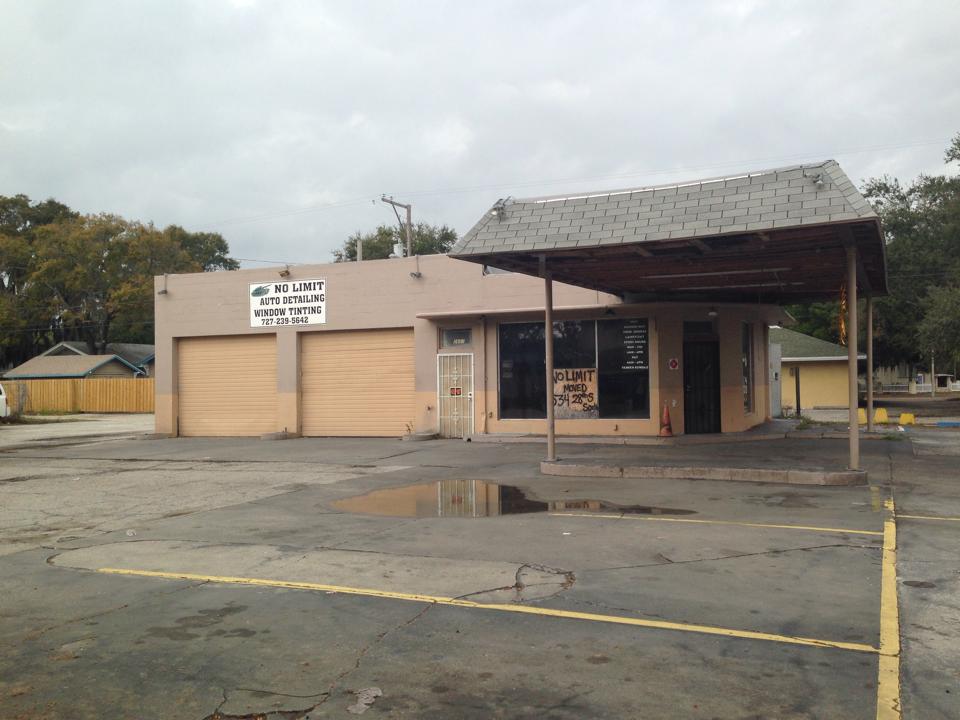 A before picture of what would become Urban Comfort. 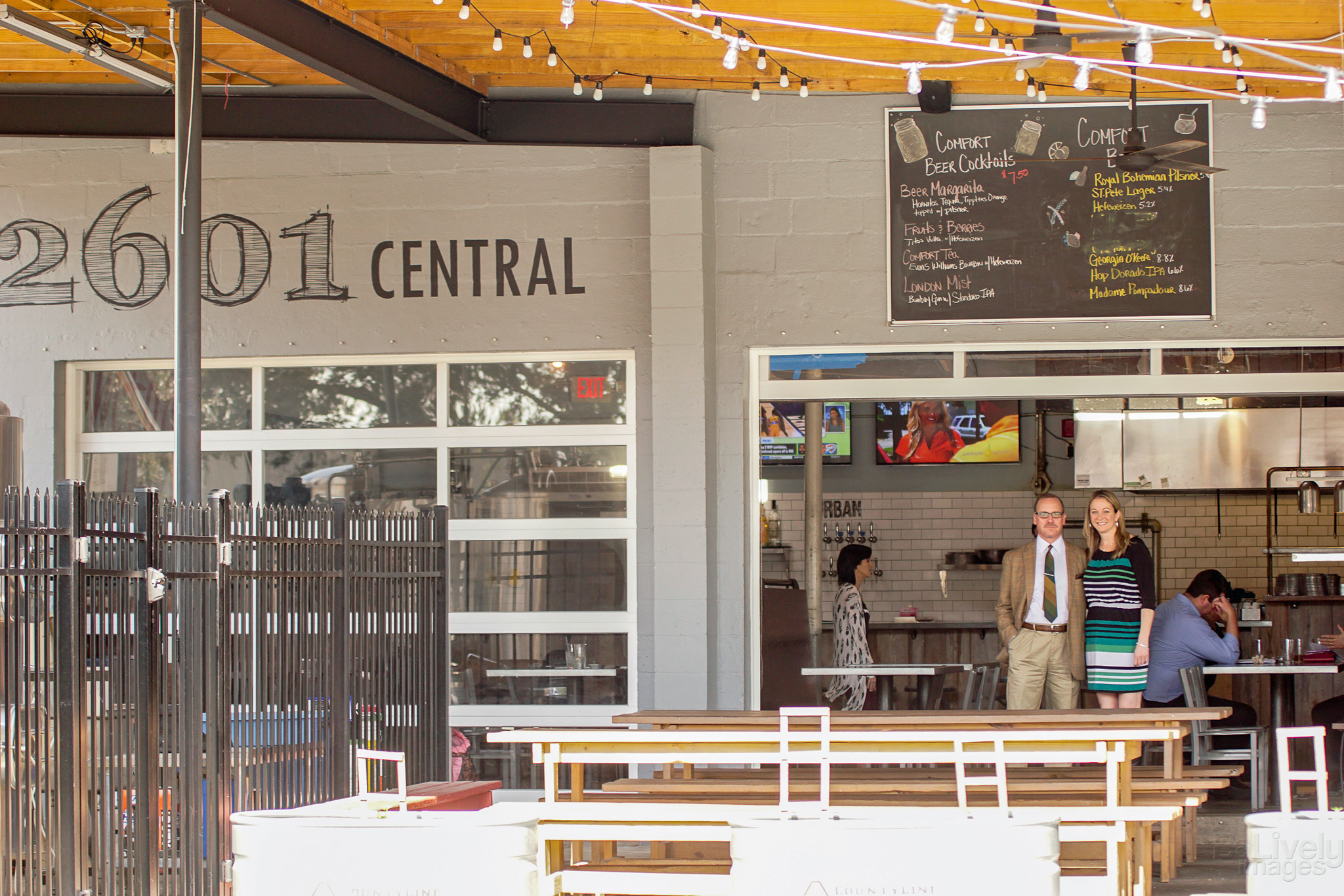 Lori and Kevin outside the renovated garage.

Andy grew up east of Sacramento in the foothills, in the gold country of California. He lived all over California from San Diego to the San Francisco Bay area to Los Angeles. When asked where the Southern influence in his menu came from he said, "I had a set of grandparents from Oklahoma and another set from Arkansas." The Arkansas side is where he got the love of Southern food. He shared a memory from his childhood, "So my grandma from Arkansas, who I just took to the airport today, for my birthday she'd make me Chocolate Pie Pie's and put them in a shoe box. I'd hide them from my sisters under the bed because that was my most cherished birthday present." 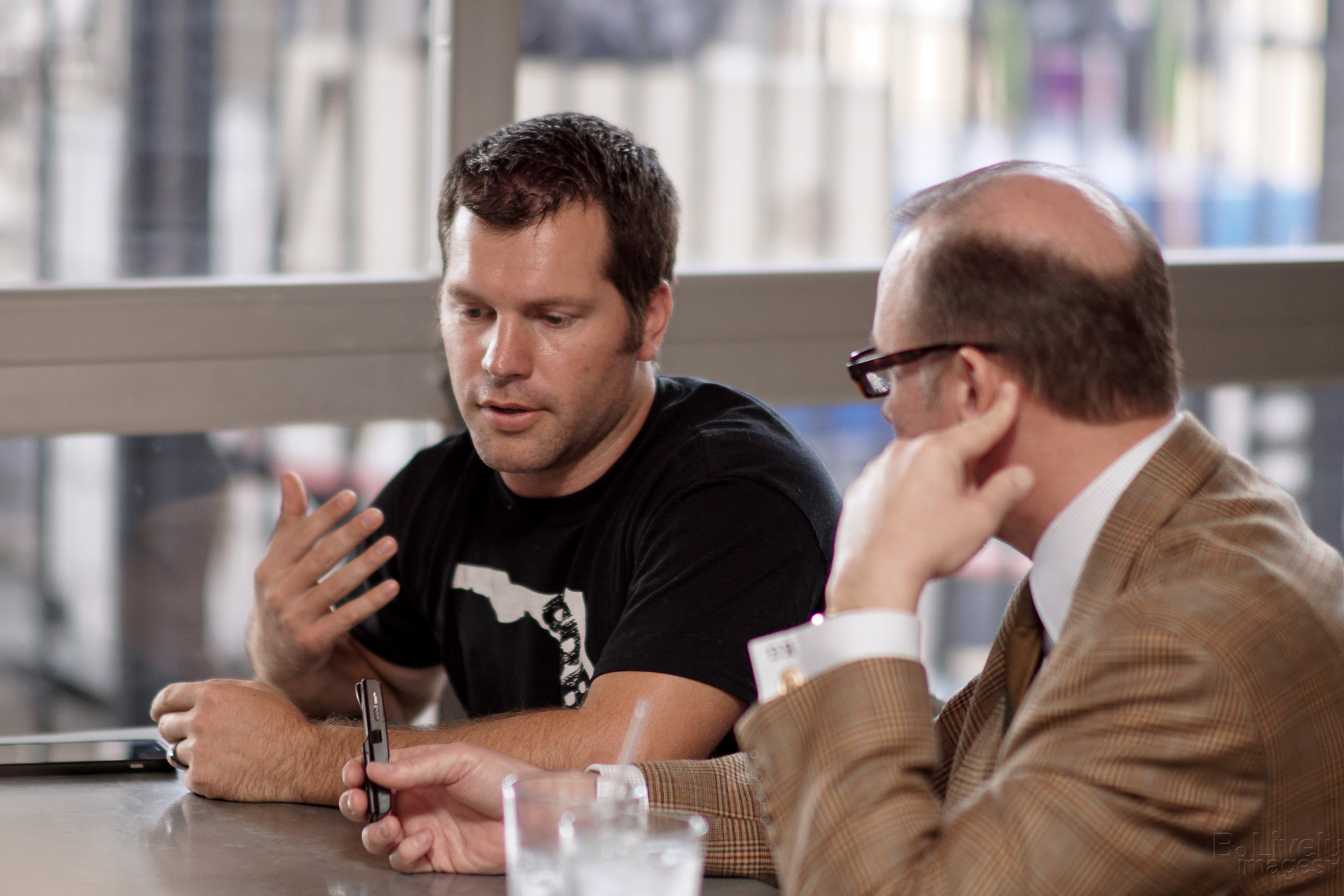 Thus, the inspiration for the food at Urban Comfort comes from his childhood. "This style of food is closer to what I ate growing up with my grandparents. BBQ was considered a special treat. So I guess that is why I have more of an emotional attachment to this (Urban Comfort's menu) food," said Andy.

Having also grown up with a mother from Georgia, I grew up with fried chicken, collard greens and many of the other Southern comfort foods that Urban Comfort offers. 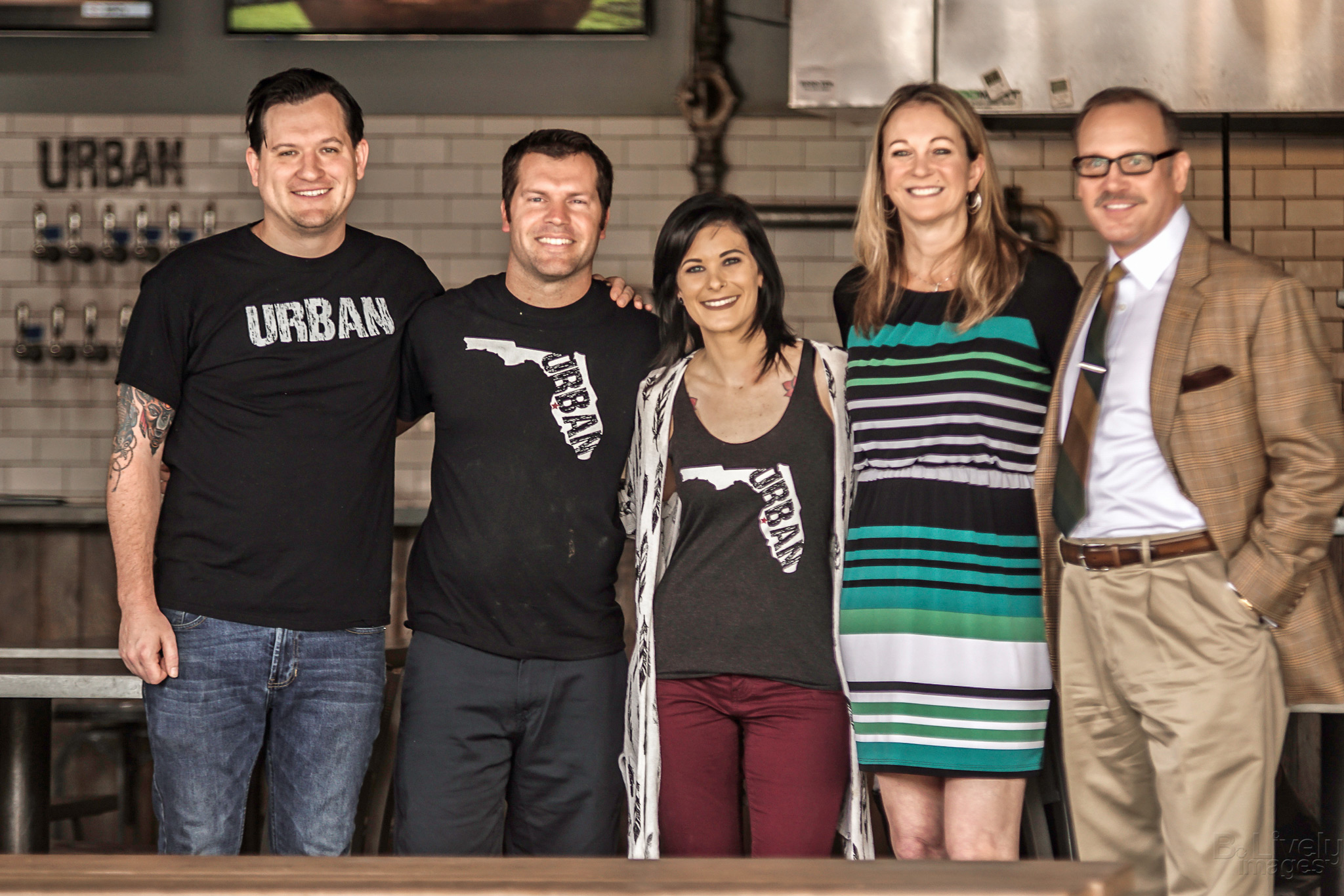 One notable fact about Urban Comfort in comparison to the other Urban restaurants is that they offer a full liquor bar along with the beer that they brew right there on site. My favorite brew was the Saison. We also tried an IPA and a Chocolate/Raspberry stout.  They grow their own Rosemary, Thyme and Mint that they use in their unique craft cocktails. 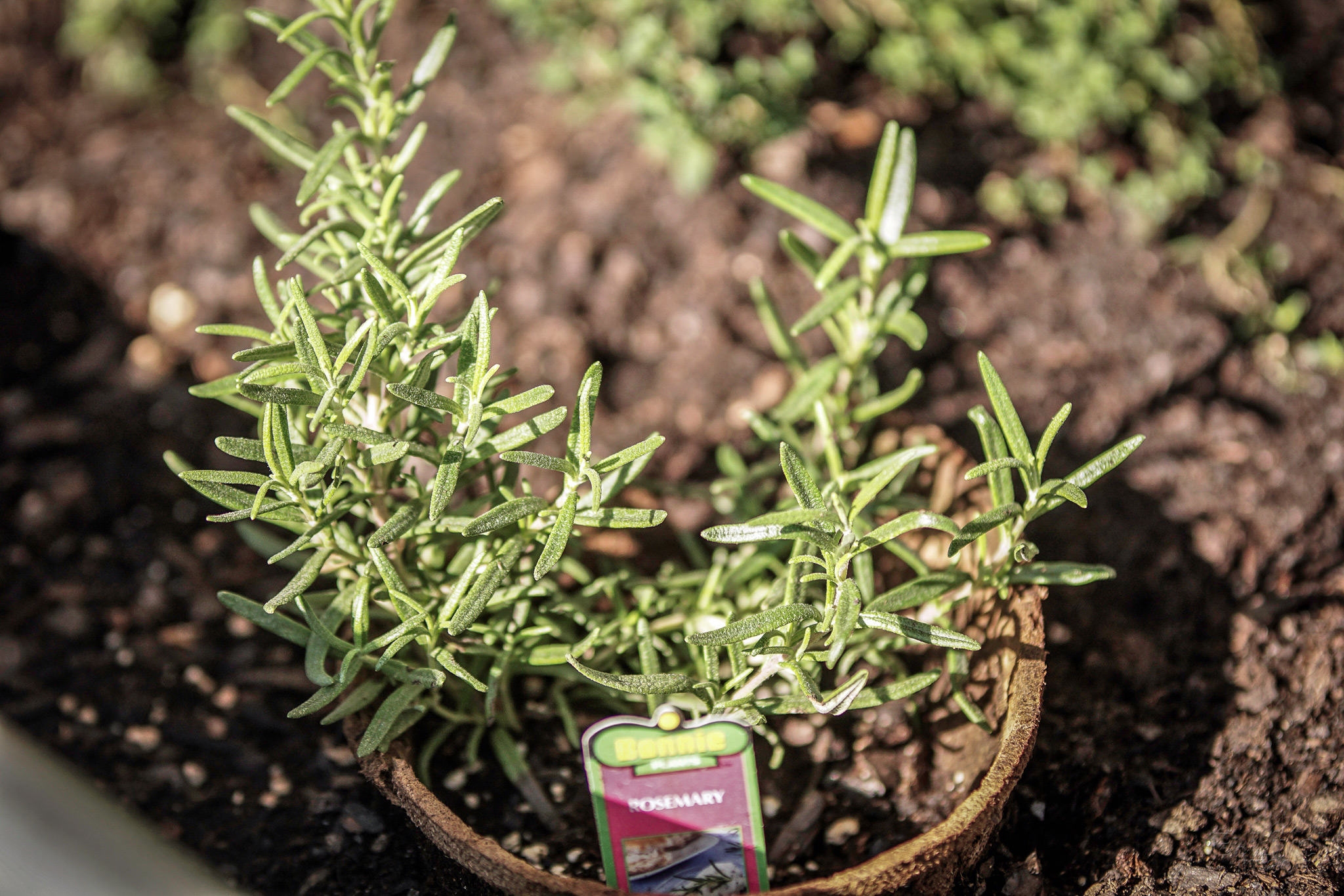 They have herb planters with Rosemary, Thyme & Mint that they use in their craft cocktails on site. 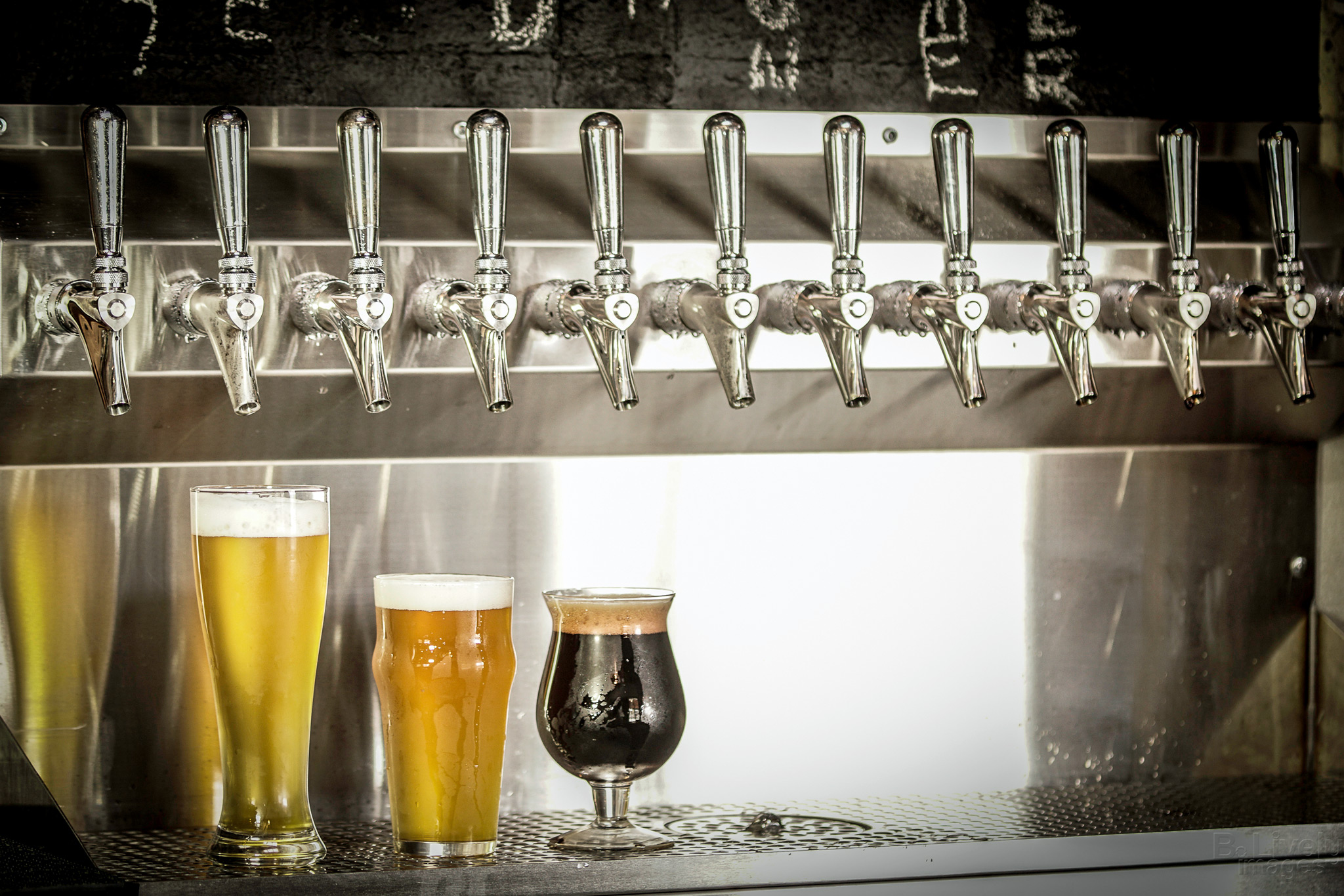 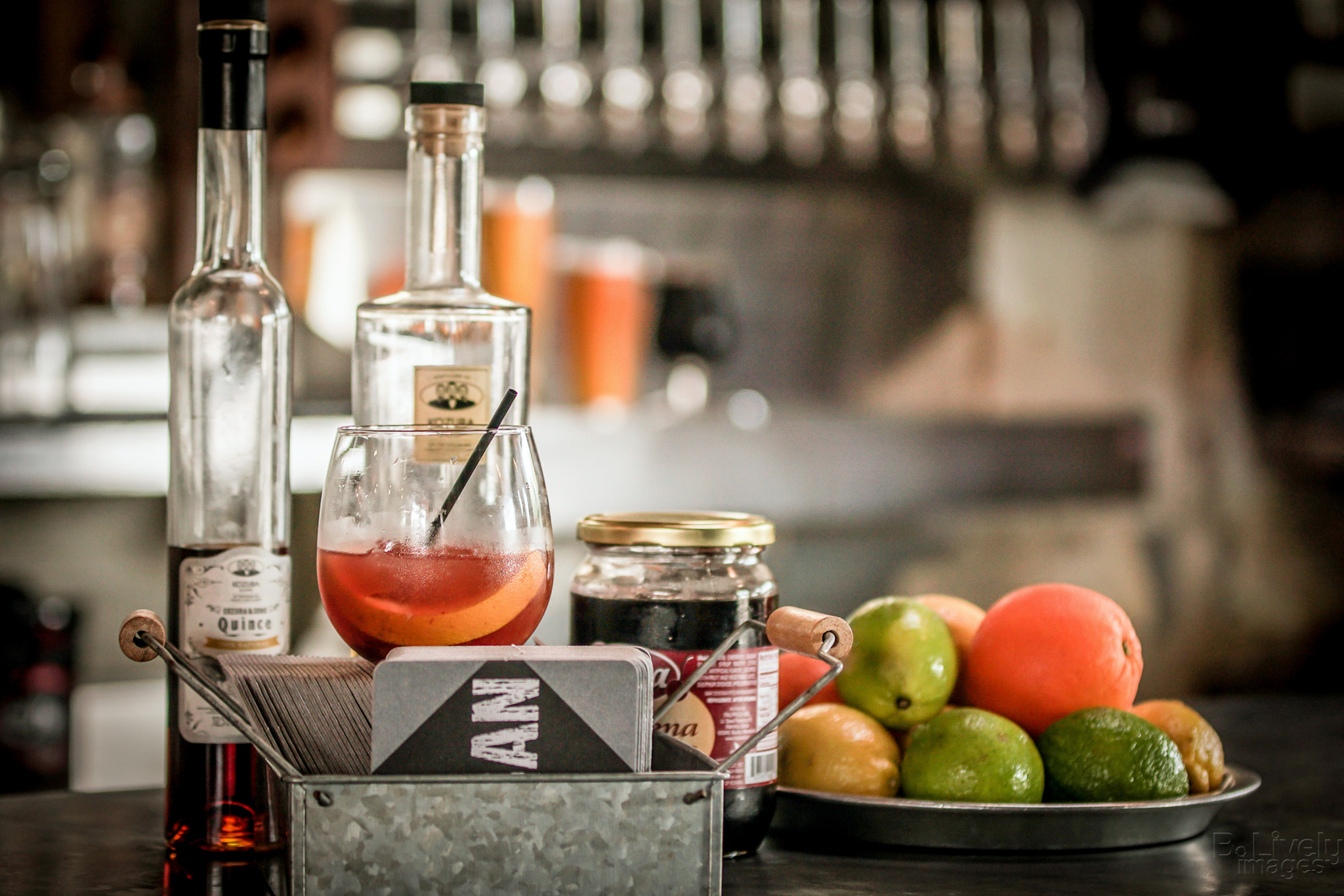 We started with their signature Fried Chicken dish served with the amazing collard greens and a biscuit. They bring in whole chickens, cut them up themselves and put the chicken in a 48 hour brine of lemon and sugar with other herbs before it gets to the fryer. The skin has a perfect degree of crispness but, for me, I was dying to add salt. Granted most people are not like me when it comes to salt. However, I loved this fried chicken because it was not greasy but crunchy. Again, I would add salt for perfection. I have already expressed my love for the collard greens in the earlier article on Urban Brew and BBQ which you can read here. The biscuit was quite good but not the most notable item on the plate. It is definitely worth the mention that all of their bread used at all of the restaurants is made fresh daily at Urban Deli & Drafts, which will be the focus of our next article. 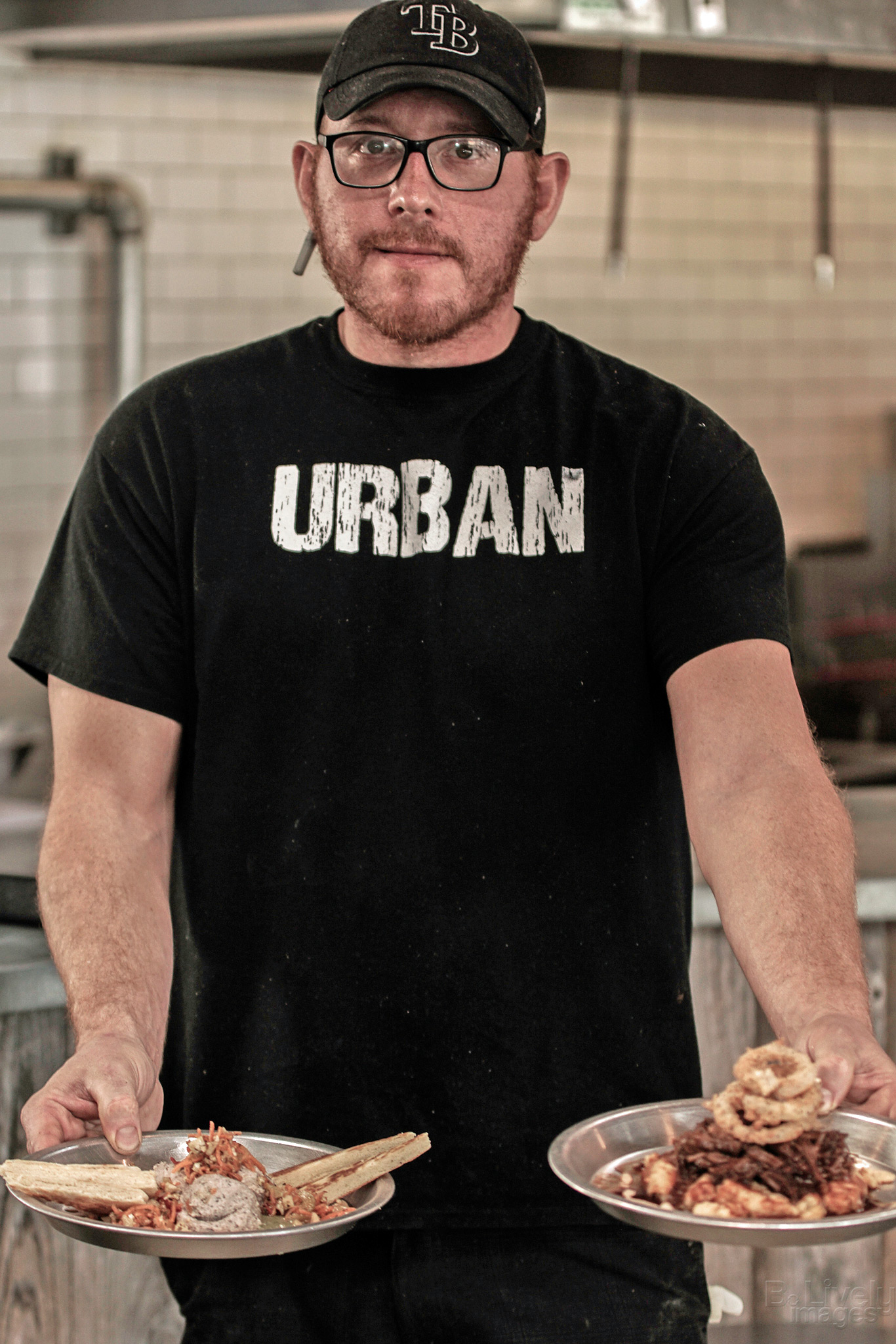 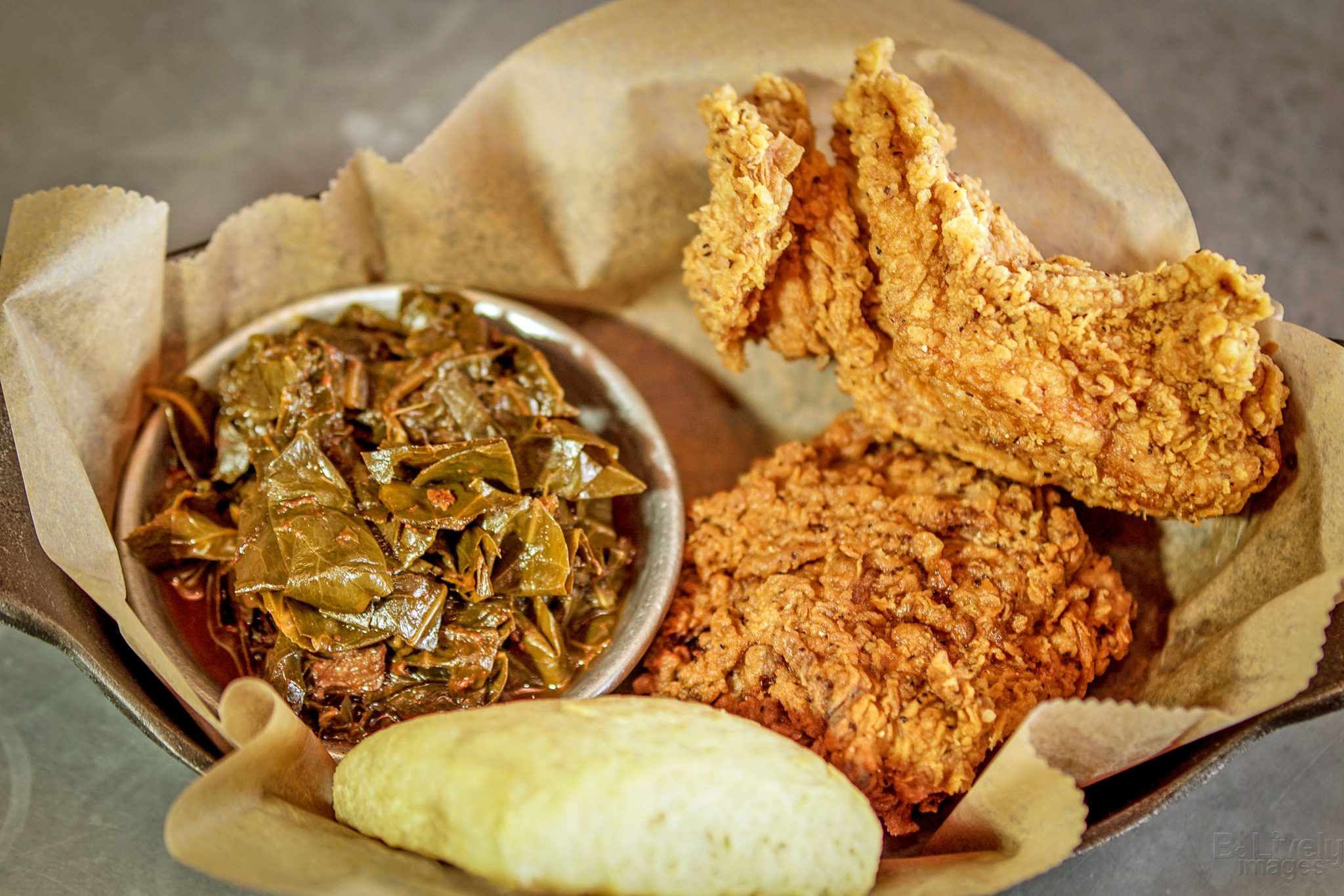 Next we tried the Black Eyed Pea Hummus served with a salsa verde made from thyme, cilantro & green tomato tops (rather than discarding them they use them for the salsa verde), a jardinière of cured vegetables and biscuit squares made from the leftover dough from the biscuit cuts. One of the most impressive things we learned is how they make use of almost all aspects of the meat, dough and the vegetables in their dishes. Very little waste happens here. The hummus was good and very different with the Black Eyed Peas...I honestly did not eat a lot of this myself because of cilantro in the salsa verde but Kevin seemed to enjoy it very much. 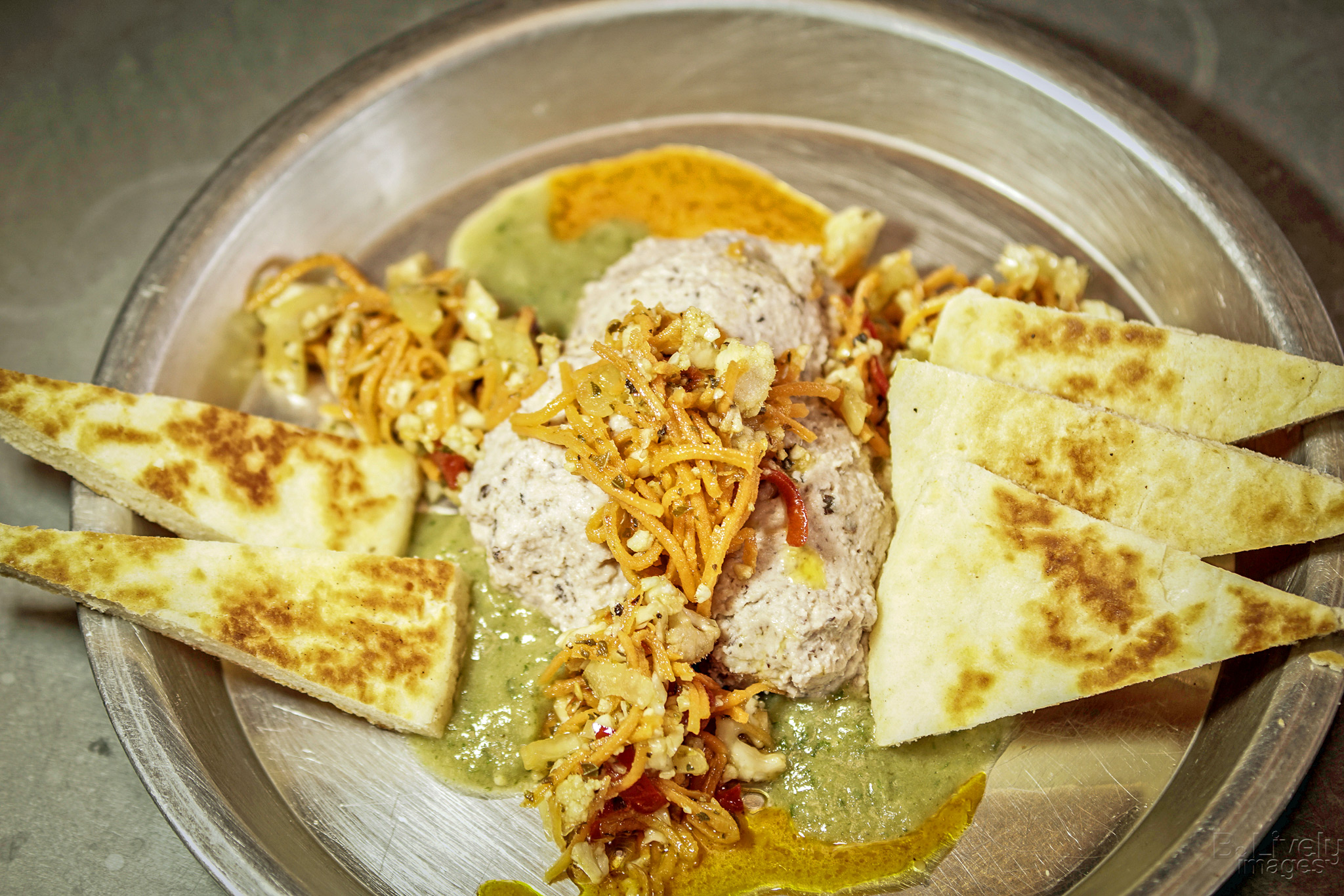 Next was the Braised Short Ribs. For the stock, instead of buying and using veal bones they use the bones of the smoked pork for the stock. Once done they caramelize  it to braise the beef. This dish was delicious! And I mean delicious! It is served with a red wine au jus and fried onions over mashed potatoes. 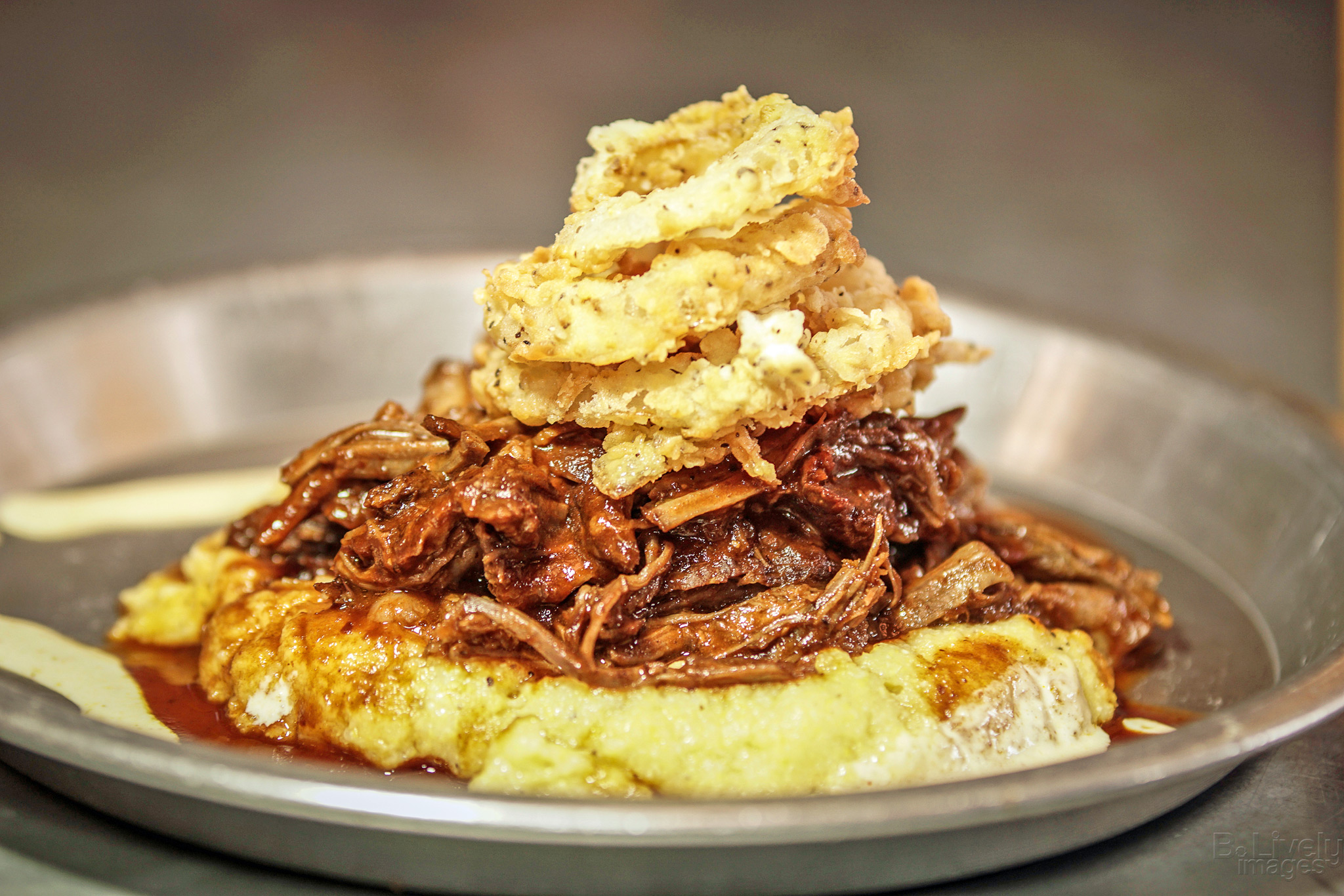 So for what we tried while we were there...that is it. But our resident photographer, Barry Lively of B.Lively Images managed to grab a few more delectable shots. 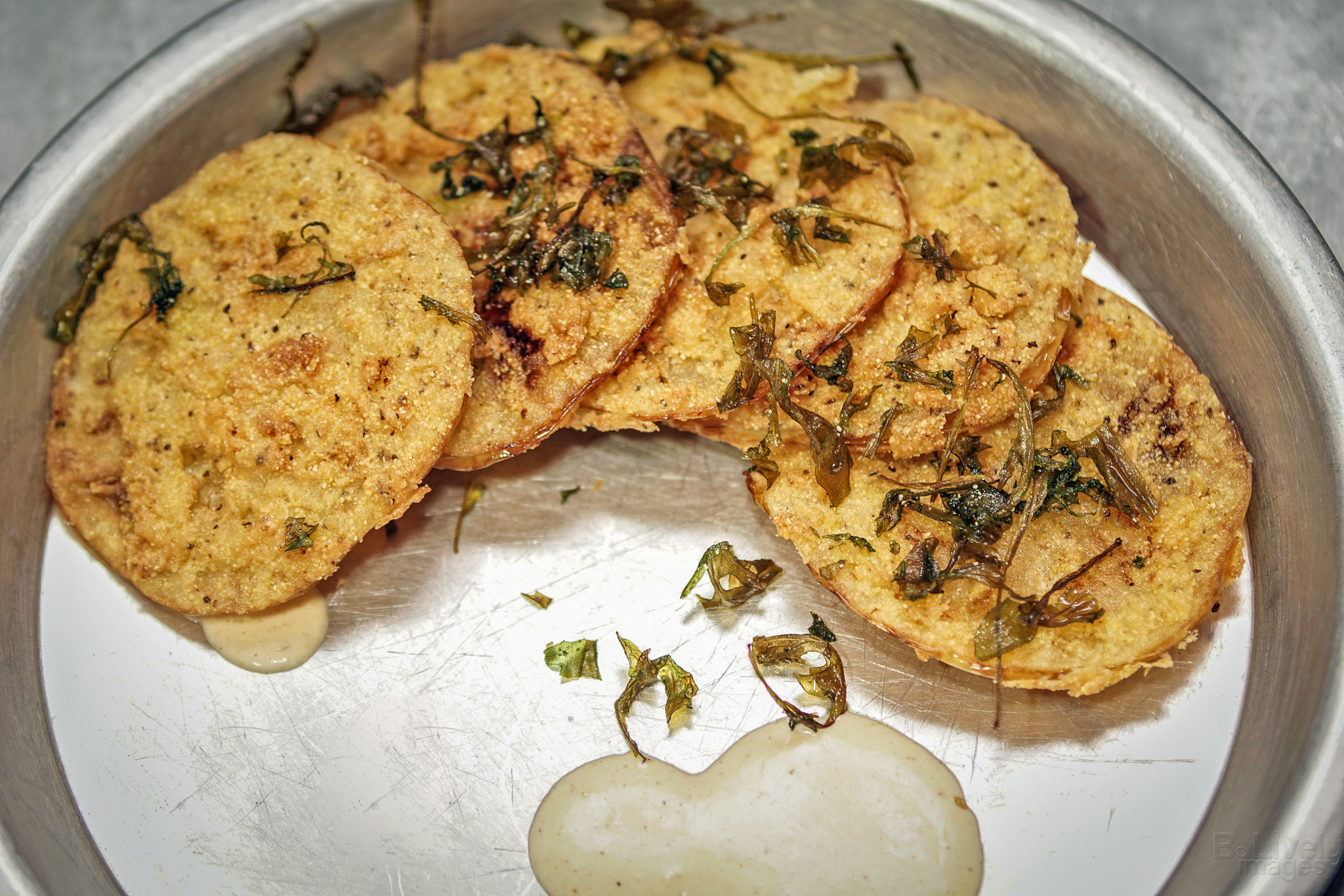 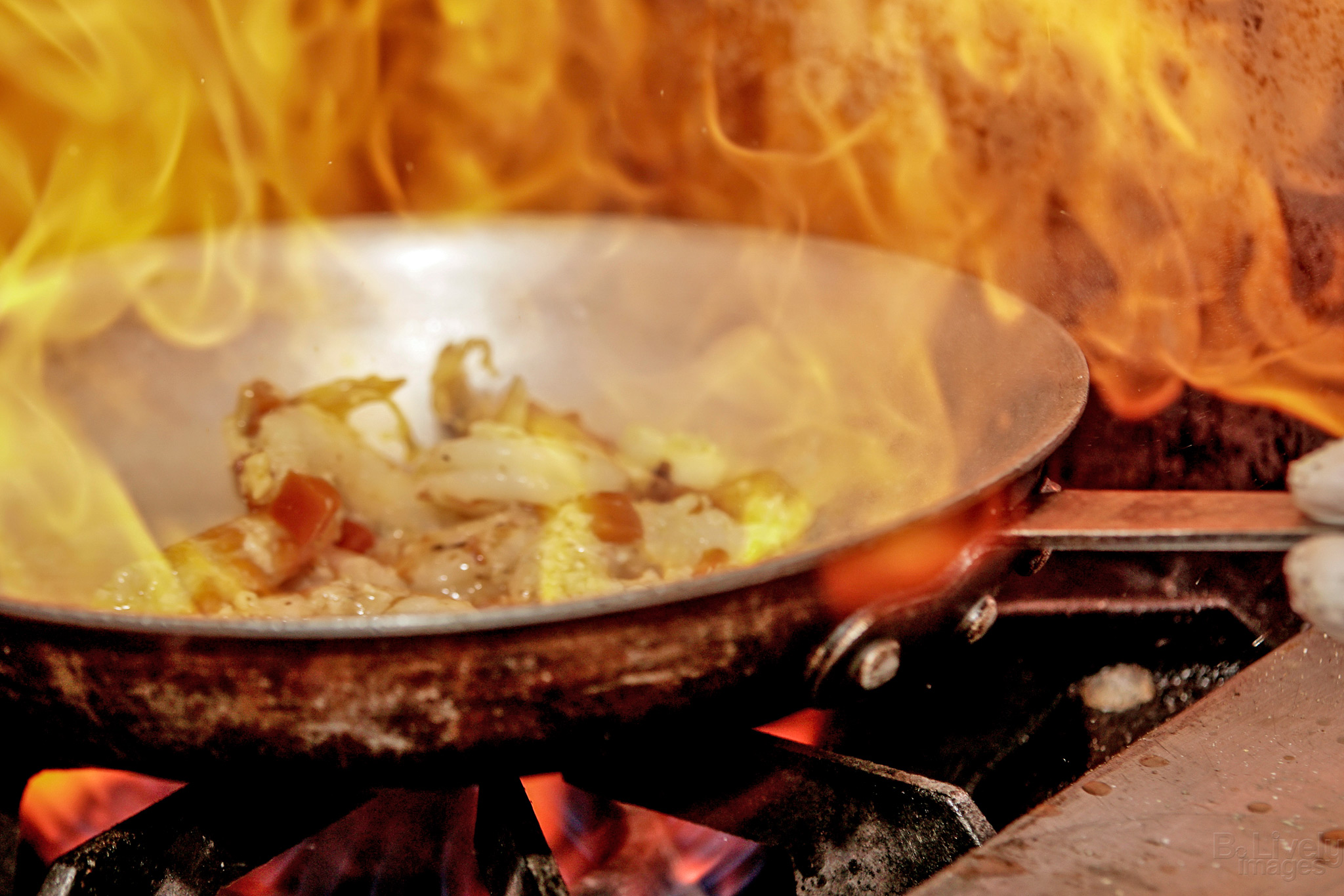 Sauteeing Shrimp for the Shrimp and Grits. 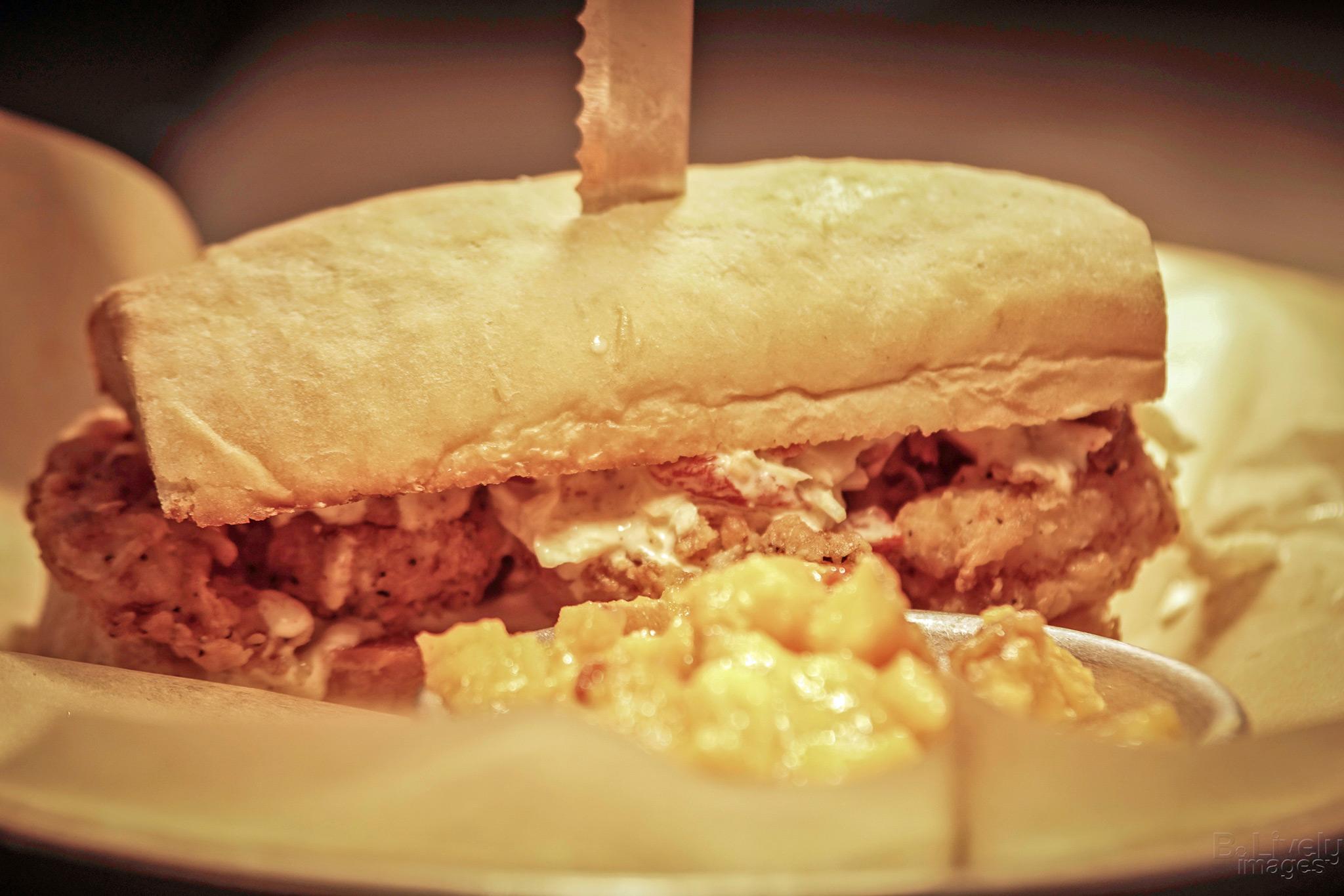 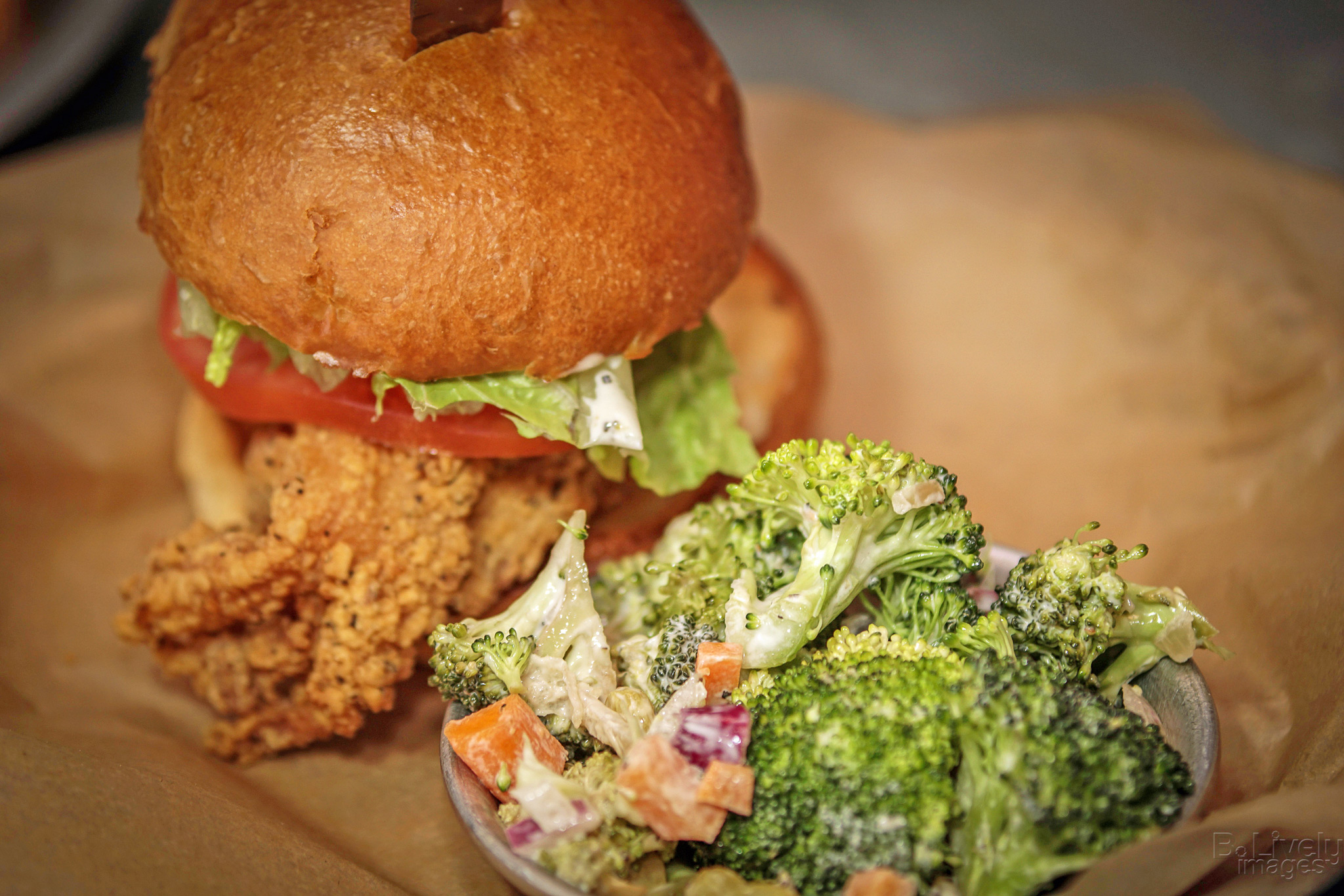 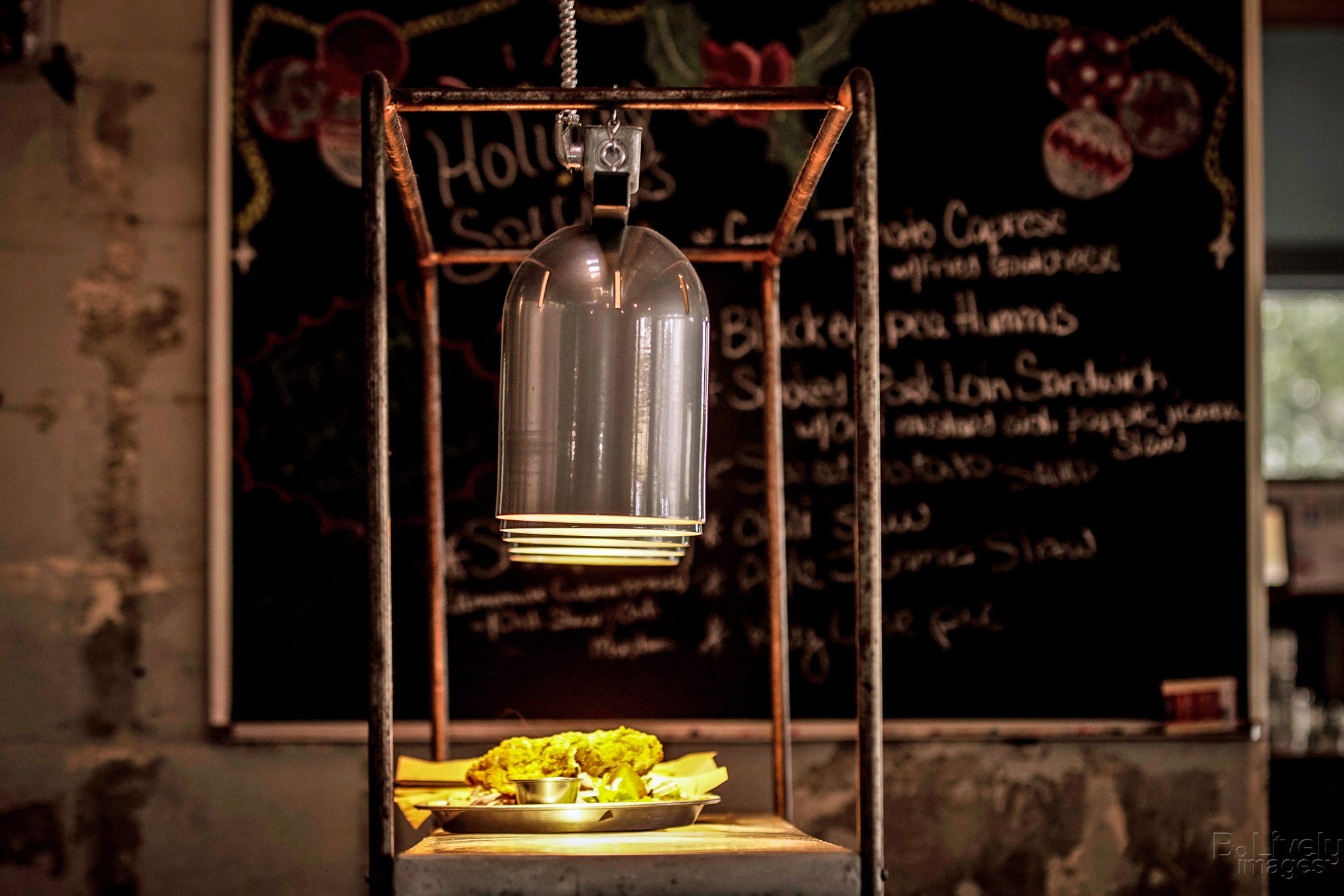 In summary, I have to go with Andy on my heart being more into the menu at Urban Comfort. Having grown up with a Southern heritage I love and relate to this menu the most. And I will say it again...the BEST collard greens that I have ever had!

And that's all folks for this edition of Urban Assault...but stay tuned for the final edition which will feature Urban Deli and Drafts and Urban Creamery. 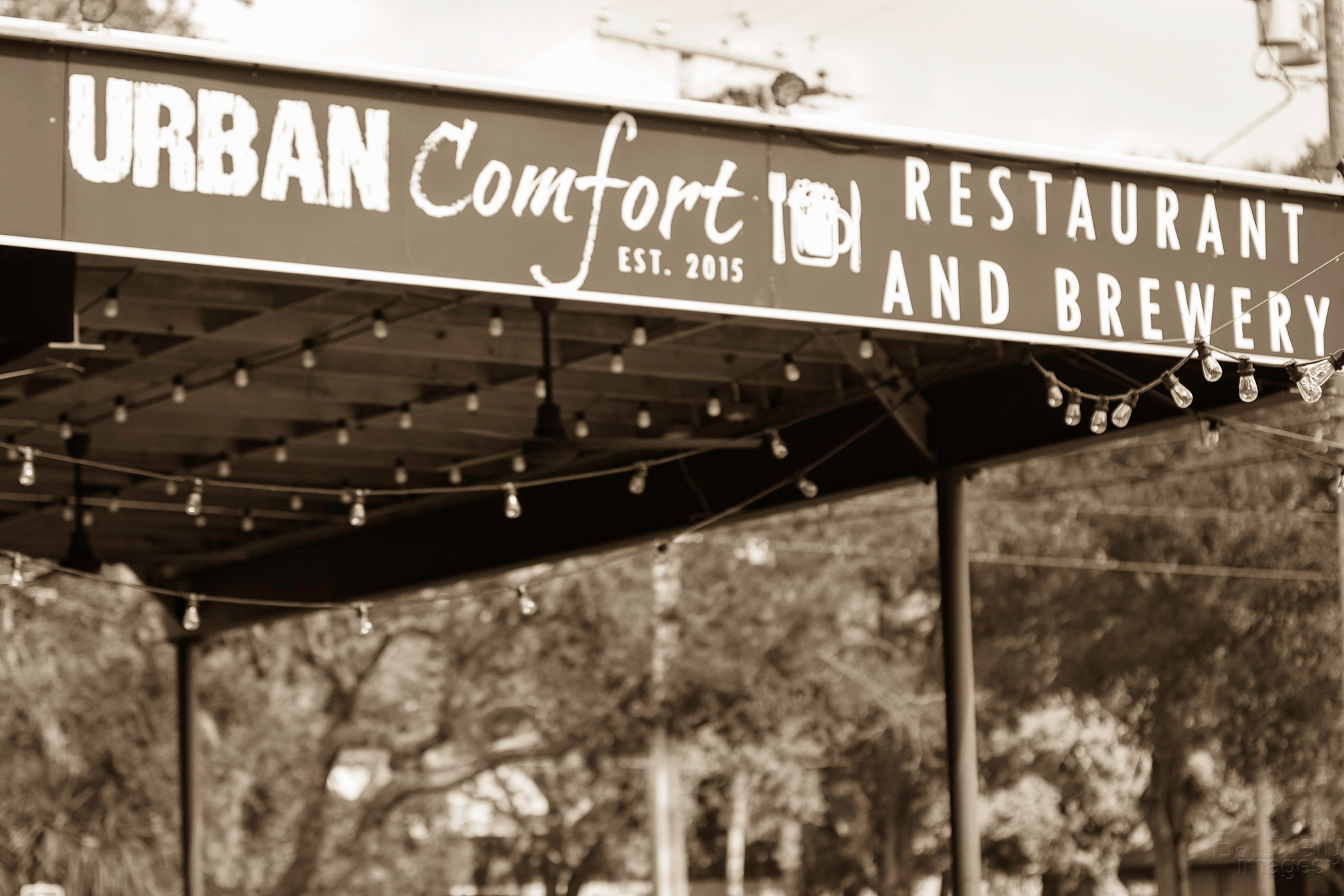 URBAN Comfort is all about the charm of southern comfort food. From our fried chicken to freshly baked biscuits and everything in between - all made from scratch.