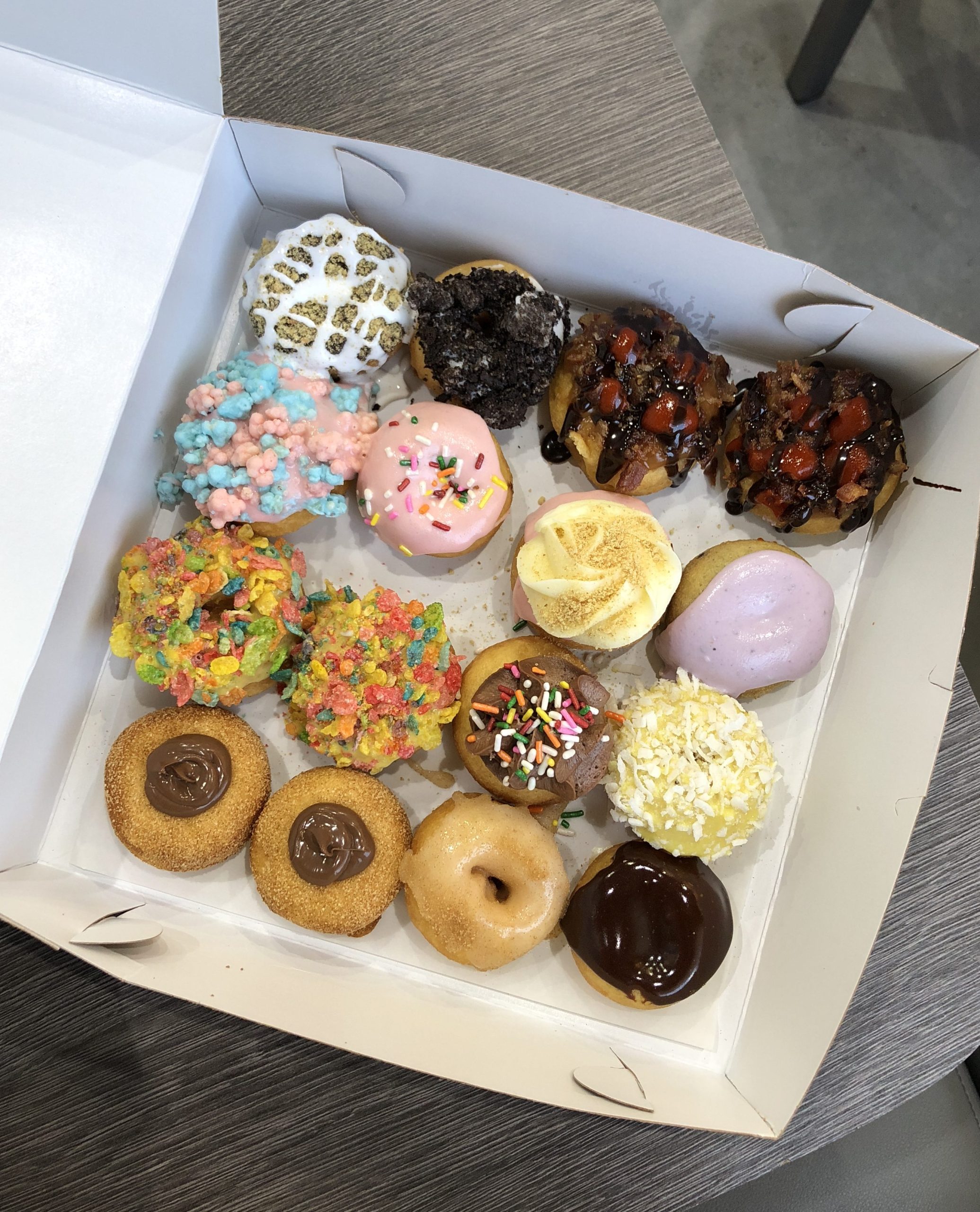 Delicious, almost bite-sized, made-to-order cake doughnuts decked out with toppings. Small in size, but mighty in flavor. That’s what you’ll get at the Mini Doughnut Factory. Along with plenty more.

If you haven’t heard, mini doughnuts are the new gourmet sweet of choice for the people of Tampa Bay. The addiction to the made-to-order gourmet minis is real. This is in large part thanks to husband & wife Patrick & Zezura, who opened the first Mini Doughnut Factory in South Tampa back in 2015. 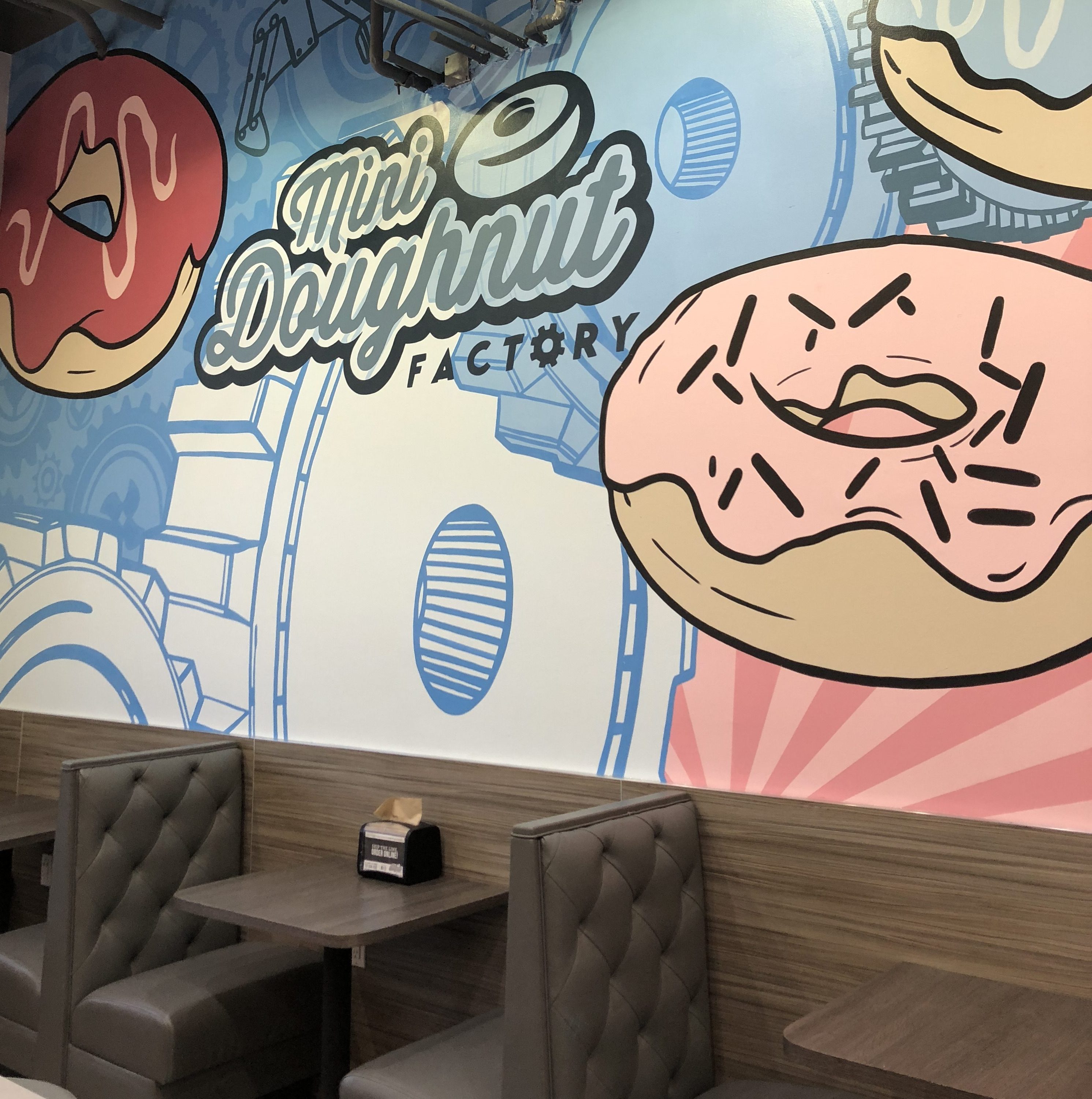 To their pleasure and surprise, Tampa Bay took quite the liking to what they were offering. People flocked to the shop and waited in long lines because the doughnuts aren’t just good, they’re fantastic. I’m convinced because of the amount of love, heart, and dedication that went into creating and perfecting these recipes and the overall brand that is Mini Doughnut Factory.

Word quickly spread and before they knew it the place was jam-packed in the early morning hours of weekdays and throughout the weekends. People began posting on social media their box ‘o minis as a reward for them and their co-workers making it to Friday. 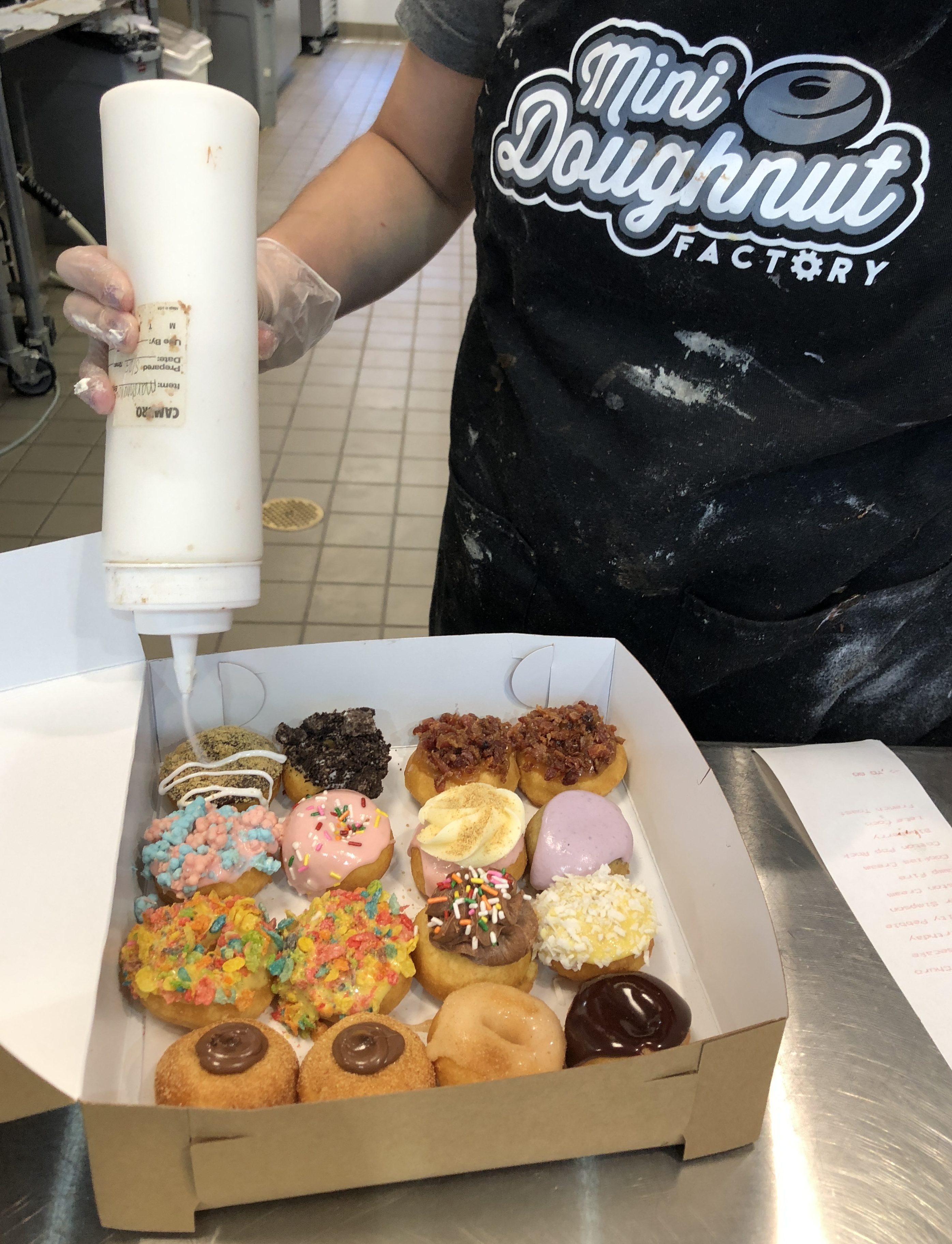 Fast-forward a few years later and Mini Doughnut Factory has expanded to St. Pete near downtown. The 4th Street location is clean and fairly minimal with a mix of high and low top tables, and doughnut murals covering the walls. Once you order, you can make your way down the line to watch the mini doughnut magic happen.

Each of the flavors is a spin on a popular dessert or candy. At the base of each mini is a fresh vanilla cake doughnut and from there, they go nuts. What I find really unique is their line of cereal flavors: French Toast and Fruity Pebbles. The latter is actually topped with the fruity pebbles; something I hadn’t tasted in years. In every bite, a feeling of nostalgia that takes me back to my youth. 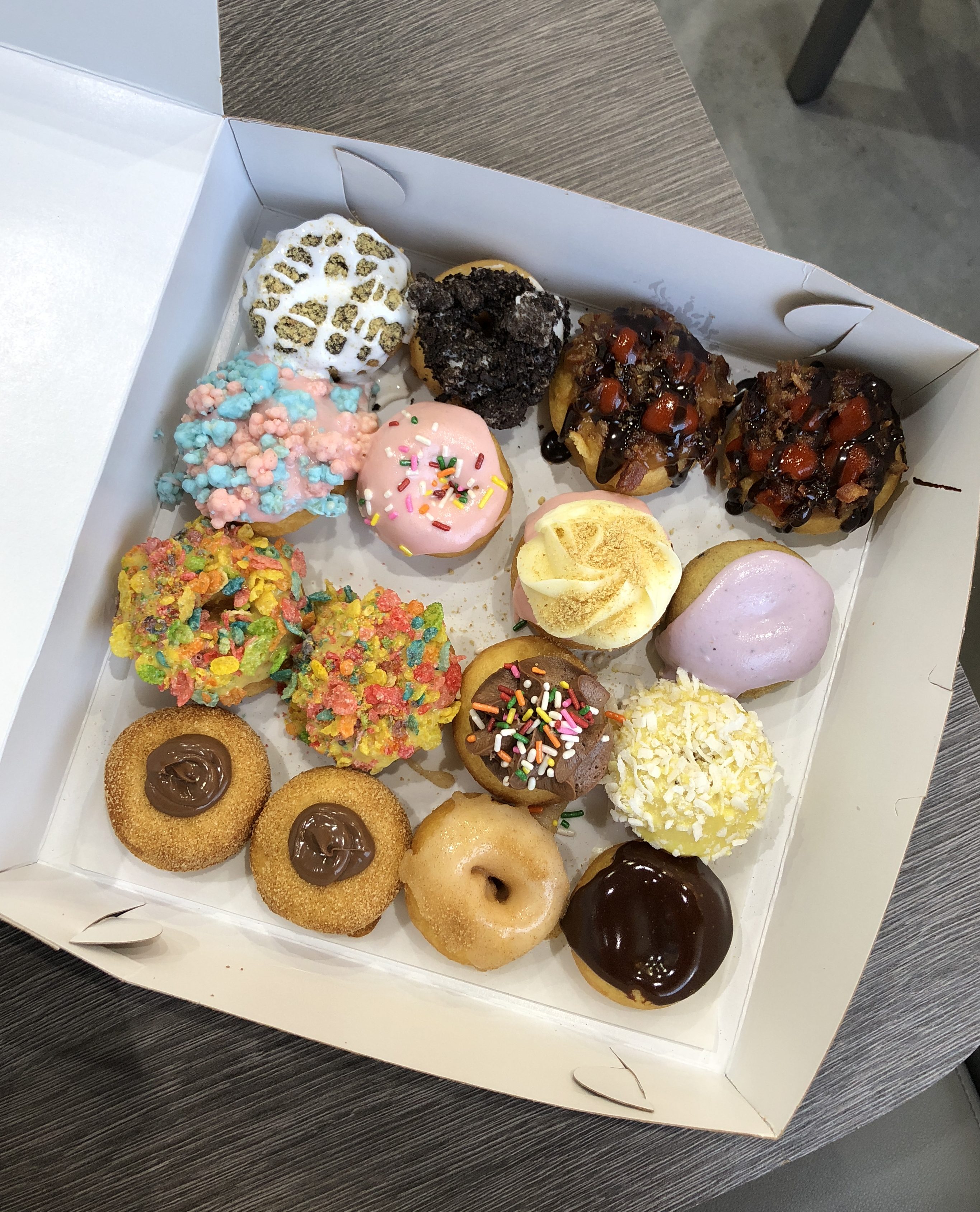 Fans of fair foods should go for the Cotton Candy that is topped with strawberry icing and cotton candy pop rocks. More “adult-like” doughnuts include the Blueberry and my personal favorite, the LeLe Coco. I describe them as such because the ingredients are more minimal. As I grow older, I’ve become fond of the simplicities in life. Like a vanilla cake mini doughnut that’s topped with only lemon icing and coconut flakes.

Don’t forget to ask about the secret menu. You won’t find it online, but if you’re diligent enough, there’s an Instagram post or two that lays it out. The ‘This Jenn Girl’ doughnut takes the Sweet Pig – maple icing and bacon – and adds a little heat with a drizzle of sriracha. It’s also named after a fellow blogger that one point ran their social media accounts. To me, this is really telling of Patrick & Zezura. Naming one of their doughnuts after a former team member shows character, and that they value their relationship with the local community.

Specialty desserts include a Doughnut Sundae and local favorite, the Doughnut Milkshake. Your choice of two doughnuts mixed into vanilla bean ice cream. To “top it off”, another mini doughnut sits on the dome top secured by a straw (Yes, a plastic one. Bring your own if you’d like.) 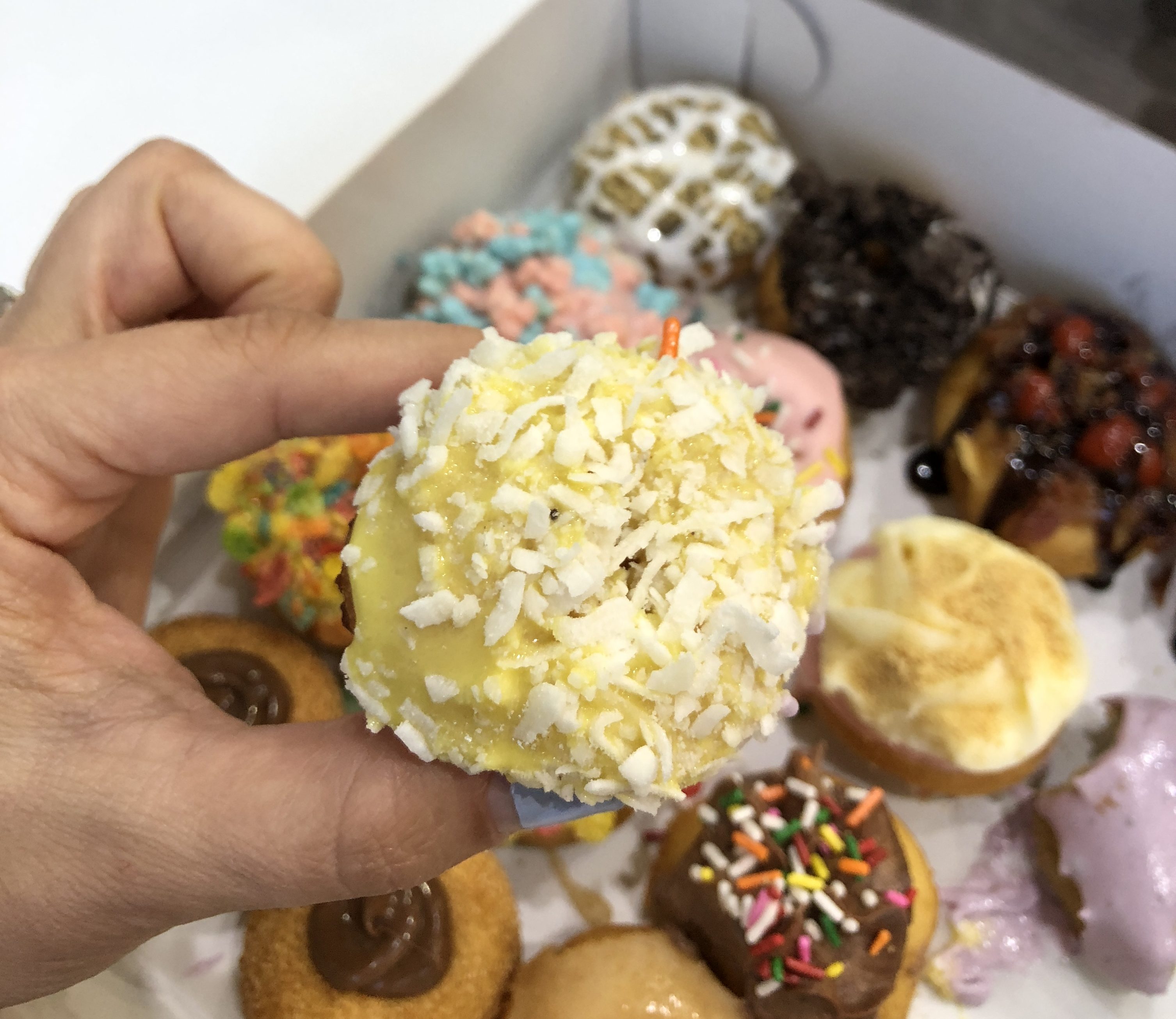 The St. Pete location offers more than just mini doughnuts and desserts. Unlike the Tampa location, they serve beer, wine, and champagne to pair with the minis. On Saturdays, they stay open well into the night, so it’s yet another option for a dessert and booze nightcap.

Back when the St. Pete location had their opening, I attended the blogger preview event where I had the pleasure of meeting Patrick and Zezura. They were beaming with joy to have successfully opened their second location. Both made the rounds to introduce themselves to each person in attendance asking a little about their blog. Their energy was infectious and it became very clear why the Mini Doughnut Factory became an instant hit in the community and is beloved by Tampa Bay. Can’t wait to see what they do next.

Delicious, almost bite-sized, made-to-order cake doughnuts decked out with toppings. Small in size, but mighty in flavor. That’s what you’ll get at the Mini Doughnut Factory. Along with plenty more.