Here is a review I posted on FB, Yelp, Urban Spoon and Trip Advisor back in August 2014 about Il Ritorno, 449 Central avenue, which is in Kevin and my opinion, the best restaurant in St Pete, if not all of Florida! We go there all the time and it is always consistently as good. Chef Dave is amazing!  Having studied in Northern Italy to create the best Northern Italian cuisine, he then returned to open Il Ritorno which means The Return.

Note: the waiter I speak of in this review is no longer with them.

So, Kevin and I have sung the praises of Il Ritorno before, however, I must share the absolutely AMAZING experience we had last night. We were seated, in our favorite spot by the way, and greeted by our server, Mike, who asked immediately if we wanted by name the same bottle of wine we had last time (two weeks ago and the first time he waited on us) and he remembered that we did not want it in an ice bucket. At this point we were already blown away.

As we were trying to decide on appetizers, and knew for sure we wanted to share the Caprese salad, he asked us if we wanted the octopus again. As much as we both did, because it is absolutely amazing, we told him that we have vowed to have something different every time we dine there. He then suggested that we try the Ricotta Gnocchi with Rabbit Bolognese and Oyster Mushrooms. We had never heard of Ricotta Gnocchi until earlier that day when Kevin's sister, Lisa, was describing it to us. Funny how that happens...so we decided that it was meant to be.

He also asked us if we were attending a show again this evening (at this, we were again stunned because he was remembering everything from our last visit) and we replied that we were in absolutely no rush. This prompted a truly lovely dining experience with perfect food timing. 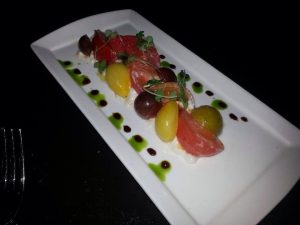 And I have not even broached the food yet...the Caprese Salad arrived with its stunning display and with just one bite my eyes rolled in the back of my head. I have no idea where those tomatoes came from but each bite was a little bit of heaven and that does not even come close to describing it. Lining the sides in dollops was basil infused olive oil with a drop of 10 year aged balsamic. Not only pleasing to the eye but tantalizing to the taste buds.

At this point, Mike asked if we were ready to order our entrees. We had decided to let Mike pick our dinner...naming it Mike Roulette. The only rule being that he could not choose what we had last time. When we told him this he broke into the largest smile and was like a kid in a candy shop. When we told him the rule, he proceeded to recite back what each of us had the last time. Unbelievable!!! 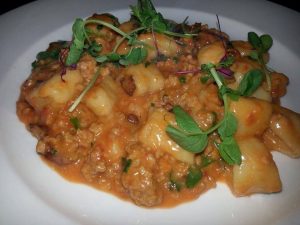 He then brought us the Ricotta Gnocchi...holy rabbit was it good! It was so delicious that we only took a few bites and asked him to box it up because we were writhing in anticipation waiting on our surprise entrees to arrive and we did not want to be too full to eat them. Can't wait to finish it off today! 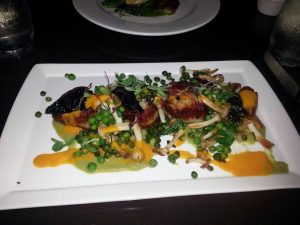 Our entrees finally arrived (I only say finally because we were excited to find out what Mike had selected). For Kevin he chose the Seared Scallops with Truffled Peas, Carrot Reduction, Crispy Kale, Beech Mushrooms and English Peas. For me he chose the Yellow Tail Snapper with Kohlrabi purée, Charred Spring Onion, Artichokes, Watermelon Radish and Capers. He said since we had Land last time so he chose Sea.

The scallops were outstanding. Scallops are tricky to get perfect, but the sear on these was sheer perfection, they cut like butter and they tasted like sweet creamed corn. The snapper was very good. It was cooked perfectly, but was a bit fishy for my taste. But that was the fish, not the preparation. 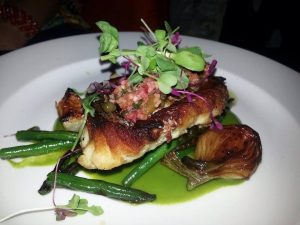 To say we were blown away by this experience does not even begin to explain it. Never in my life have I experienced such outstanding service combined with the best food I have ever had! If you have not been to Il Ritorno, you are missing out on one of the great wonders of St Pete! It is by far the best restaurant in town, if not in the country.

Lemongrass Beef Sandwich with a fried egg from @la