Cafe Cibo Takes Me Back in Time to My Sicilian Grandmother

I grew up in New Jersey in the 1970s-early 80s. It seems like, back then, that all of my friends were either Jewish, or Italian. Maybe some Irish too. It was old school northeast—New York / New Jersey area. (Cue “The Soparanos” theme music.)  I also grew up with an Italian grandmother. It sounds like a cliché, but my maternal grandparents literally came over on the boat from Sicily.

When I go to Cafe Cibo, it brings me back to that time. The atmosphere feels a little dated, but I actually like it. It’s quite homey. (They’ve been around since 1999.) It feels more like my grandmother’s basement than a restaurant. Their house was in New Brunswick, close to Rutgers University, and one block from the Douglas College for Women’s Dorms. (I appreciated this a lot more as I got older.) Their basement was completely finished with a full kitchen including stove, oven, and refrigerator, and had a long table for large family gatherings. (How cool is it to have two kitchens in one house?)

Everything was made from scratch, from the backyard garden, always fresh grated cheese that came from the delivery truck. Yep. Back then, in the earlier days, we had a milkman that delivered fresh milk, and we had a cheese guy that brought large chunks of cheese to my grandmother’s house. (This makes me seem really old.)

At Cafe Cibo, you start off with two types of Italian bread that are both excellent—a few pieces of a nice rustic baguette, and a few pieces of Focaccia. Then there’s the famous dipping sauce. The dipping sauce gets rave reviews everywhere you can find reviews.

The Caesar Salad is good and fresh, and pretty standard. I really liked the homemade, rustic, crunchy, buttery croutons. They use a light Caesar dressing, which is perfectly fine.

If you feel like a standard Italian salad, then get the Insalata di Casa – mixed greens tossed with house balsamic vinaigrette and topped with red onions, olives & tomatoes.

The Italian Wedding Soup is quite interesting. It is a simple version with just broth, parmesan cheese, Ditalini pasta, and meatballs.

Usually, you also have spinach, chicken, and Acini Di Pepe pasta rather than Ditalini.

Also, the meatballs are larger than usual.

With it being so different than the usual Italian Wedding Soup, I still love it.

Because it reminds me exactly of the soup my grandmother made. (For the record, we actually called her, “Mom-Mom”.)

Mom-Mom made a simple soup with the Ditalini pasta just like Cafe Cibo’s. The mouthfeel of that pasta combined with the taste and feel of the grated parmesan, and the flavor and silkiness of the broth…Wow! It’s a perfect example of “simpler is better”. (I like the standard version of Italian wedding soup too.)

Let’s get back to the meatballs in the soup. Usually, Italian Wedding Soup has meatballs that are 1″ in diameter. Cafe Cibo’s soup meatballs are about 1¾” in diameter, and they are delicious.

Another dish I had a lot as a kid was beef ravioli in red sauce, which I couldn’t tell you where to get around here. I never see it.

Then I see Ravioli on the menu, and blurt out, “I want that!” I did this without reading the description as we were just in an ordering frenzy. It turns out that Cafe Cibo’s Ravioli is filled with chicken, provolone cheese, and rosemary, and topped with a gorgonzola cheese sauce.

Not my thing, but it was good for what it was, and I think it could be a good item to order for a little kid that might be a picky eater.

Italian Sausage – grilled and served with sautéed peppers and onions. I had “Sausage & Peppers” all the time growing up, and I find it odd that a lot of the Italian places around here don’t have it. It seems like less than half do, so I am glad that Cafe Cibo does. They just call it “Italian Sausage”, and they use red bell peppers instead of green, which makes for a nice sweeter version. I’m a huge fan of spicy foods, and that’s how I prefer my sausage, but the sweet sausage here is extremely flavorful, and I would definitely order this over and over again.

Fettuccine Bolognese – with house meat sauce. Bolognese sauce is one of Lori’s go-to’s for judging an Italian eatery, and Cafe Cibo aced the test—rich, meaty, and mouthwateringly delicious!

A nice thing at Cafe Cibo that you don’t see at other places is that they offer the option of small or large portions on many, maybe 65%, of the items. Since we were ordering more than normal for the review, we got a small portion on the Fettuccine Bolognese.

I also loved what is kind of a kicked up, spicier version of the Fettuccine Bolognese, the house specialty pasta—Pasta di Cibo.

In this case the Bolognese sauce uses spicy sausage. Peas and carrots are added, which gives it extra textures on your tongue, a great mouthfeel, and the wonderful “pop” of the peas when you bite them.

Veal Piccata – sautéed in a lemon butter sauce and capers. This is another one of Lori’s measurement criteria. We both agreed that it was one of the best we ever had. Lori even said it was her new favorite veal piccata, surpassing her previous favorite. The quality of the veal is just spectacular. They could have gone a little bit lighter on the capers, but that’s nothing to really complain about.

Cafe Cibo is a casual, low-key, neighborhood Italian joint using family recipes that show how delectable and craveable high quality ingredients, and simple preparations can be.

It’s like being a kid again, and getting a hug from grandma. You’ll love the food as much as grandma loved you. 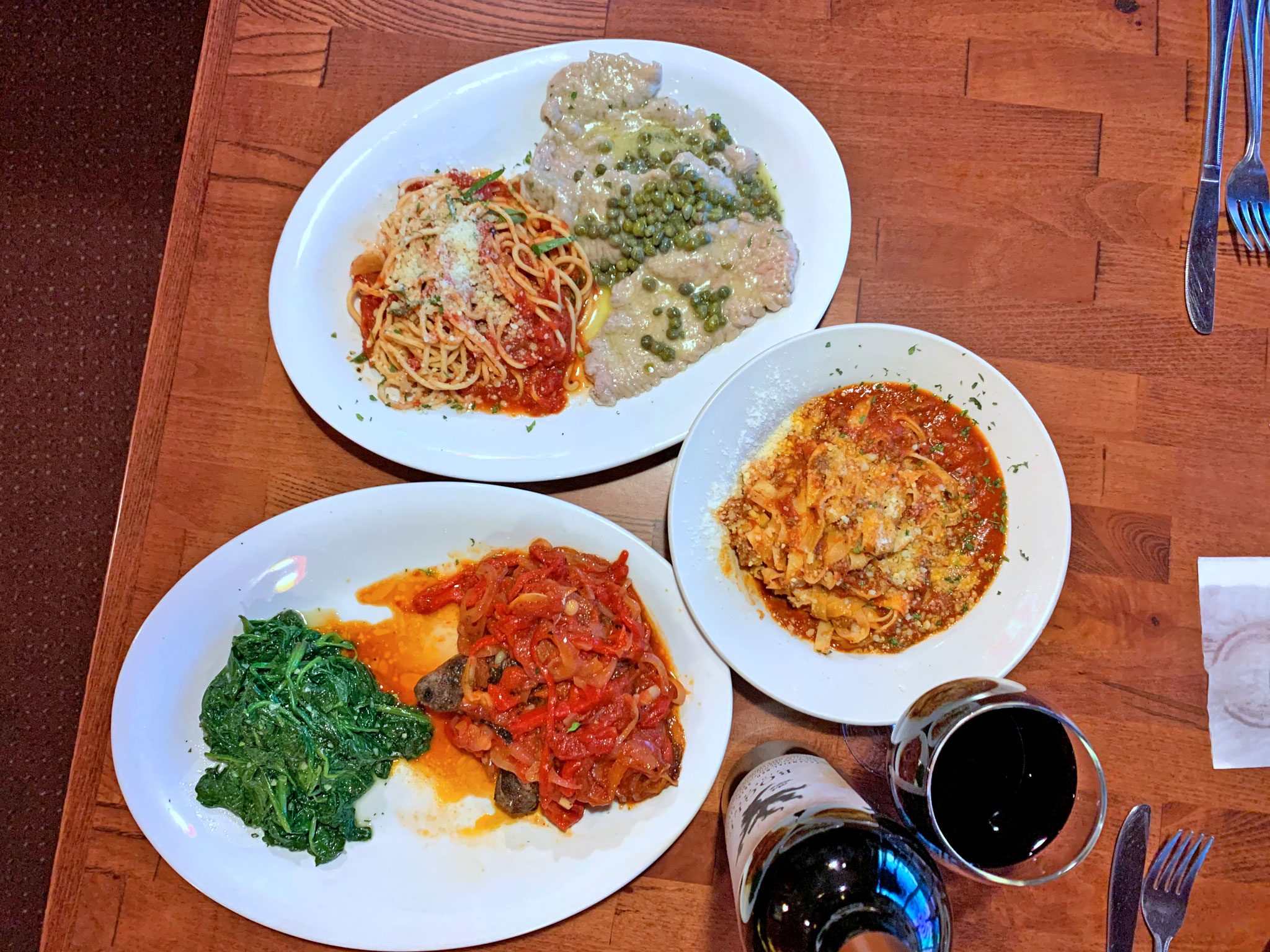 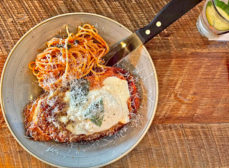 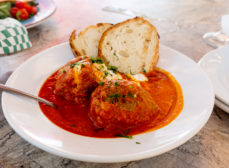 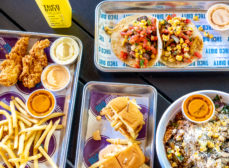 On The Fly Food Hall Offers Delicious Choices For Everyone