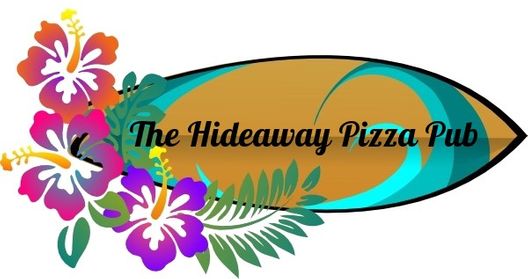 About 14 months ago we published this piece on the opening of The Hideaway Pizza Pub. At the time, the projected opening date was in the Fall of 2017. Lots of red tape, blood, sweat and tears later, it finally, quietly opened about two weeks ago. It is an old house that was converted into a tiki, beach, boat themed restaurant/pub.

The interior is lively and inviting. It is divided into several indoor rooms and several outdoor back bar areas too. All food and drinks are served inside and out. Please check out more photos of the space and the full menu at the bottom of this article.

Kevin and I were invited in to come and try the food and check out the space. To be honest, we weren’t quite sure what to expect and were a bit nervous about the quality of the food. We couldn’t have been more wrong. At least for the items we tried.

They have a simple drink menu yet different and we both enjoyed our drinks. Kevin ordered the Smokey Margarita which is made with Vida Mezcal, lime and agave and rimmed with black lava salt. He loved it! I am not a huge fan of the flavor or Mezcal vs. Tequila so it was not my favorite. I ordered the Scurvy Dog which is Cask & Crew Ginger Spice Whiskey and ginger beer. It was yummy. Basically their take on a Moscow Mule, but not as cloying. Sometimes I find them to be a bit too sweet to drink more than one. That was not the case with this one. Because I had two. A little squeeze of lime brightened it up too.

The menu is simple yet has great offerings. We started with the garlic knots. The first thing I said to Kevin is that you can definitely tell that the marinara that they serve with them is made in house. It was fresh and delicious. The garlic knots were seasoned perfectly, hot and delicious.

Our first appetizer was the Meatball Sliders. Everywhere we go, if meatballs are on the menu, Kevin must order them. Making them as sliders is a very different offering from most menus. Kevin said the meatballs were very good and he would order them again. They were very tasty with the soft, fresh bread and cheese.

We saw the wings at another table and they looked great and the way they were being scarfed down we thought they had to be good. They offer them as an order of 6 or 12, boneless or regular, naked or breaded and with many different sauce options. You can have them tossed or with the sauce on the side. Since we couldn’t decide on a sauce, our server suggested we get them on the side and try a few. So glad we did. I first tasted the wing without sauce and it was so good that way. I was impressed with the seasoning. It was almost like Everything bagel seasoning. Next I had the sauce that I thought I would like the best, Southern Gold, which is like a Carolina Mustard sauce. And I loved it! It has a great heat bite to it. Kevin loved the Buffalo sauce the best and we both rated the Honey Sriracha as third. It was good but a bit sweet for my tastes.

Now for the true test…the pizza. It is touted as NY style pizza. Our favorite pizza to order anywhere is pepperoni, mushroom, bacon & jalapeño. They did not have bacon or jalapeño listed as a topping. But we noticed on the menu that they do have both ingredients, so we asked anyway and they said they could do it. The chef also said he will now probably add those to the list of toppings.

As you can see, the pizza came out looking absolutely delectable! And it tasted fantastic too. All of the flavors were there. I think the jalapeños were pickled and not fresh cut, but they were still good. Two things I noted and shared with management were that the crust seemed not quite done, like the ovens need to be hotter and that for my tastes, I did not feel there was enough sauce. It was more cheese than sauce. It was very cheesy deliciousness though. They are working on the crust issue and I am sure that will be resolved quickly. The most important part was that the taste was great!

Very excited to try some other items on the menu. We were told that the ribs are amazing.

Here are some more interior pictures.

After dinner we went out back to check out the scene. It was fun, lively, beachy and of course warm. But they do have lots of fans around.

We found the picnic table area to be actually quite tolerable heatwise so we ended up hanging for another hour or so to watch Chris Walker perform. It was a great time! I am sure The Hideaway Pizza Pub will be a very popular local hangout.

A unique and fun atmosphere that is kid friendly offering live music most evening, indoor and outdoor seating in a beach like setting. The menu consists of great pizza, wings, sandwiches and more.