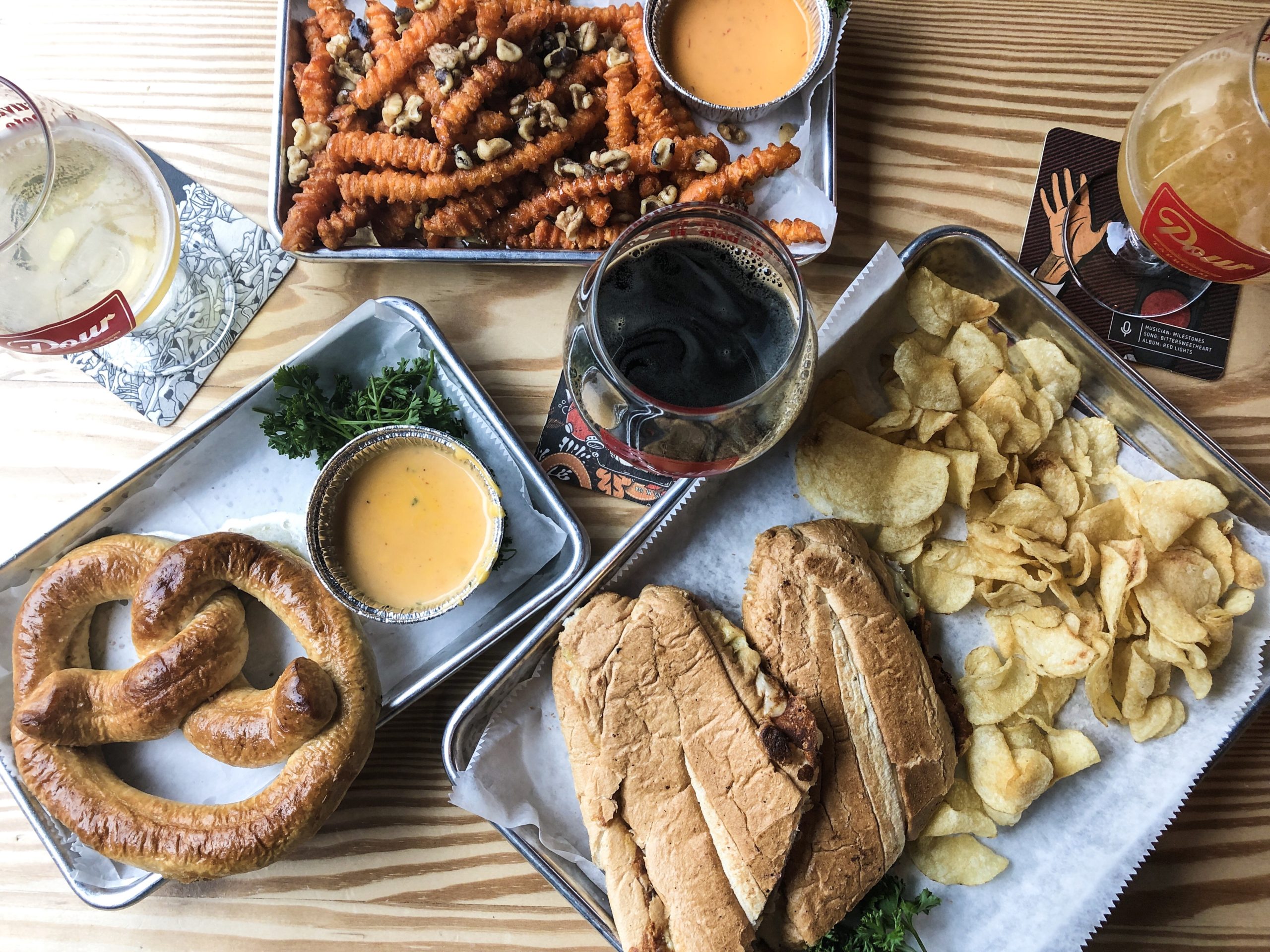 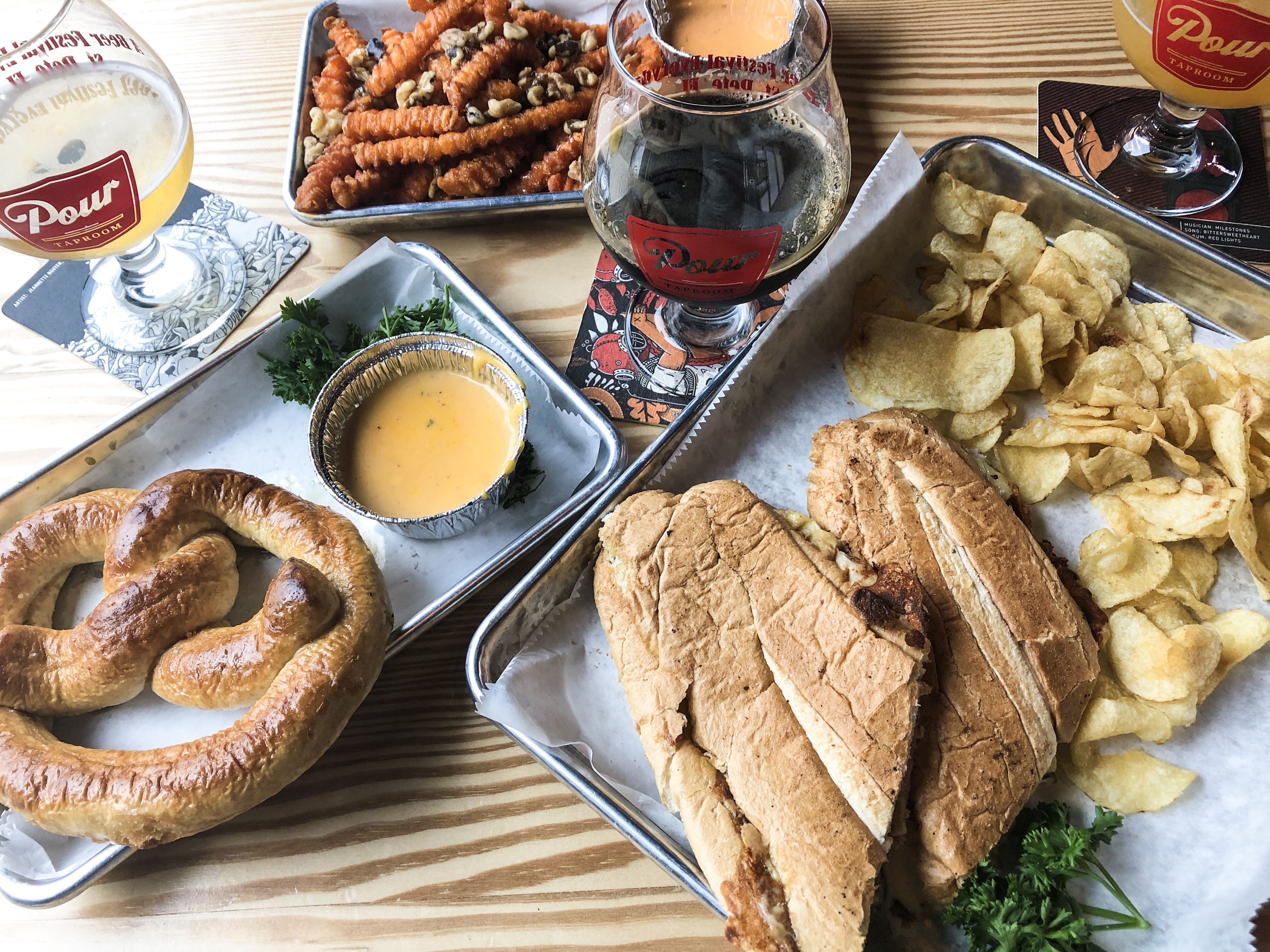 Pour Taproom made its debut in the downtown St. Pete scene on December 15th, 2017 (they just celebrated the one year mark!) as the first self-serve taproom in St. Pete. Patrons have the freedom to sample and pour their own beer, which makes for an appealing and interactive experience. Guests obtain a wristband upon entering the facility, scan the wristband at the tap that they wish to sample and pour as much or as little beer/wine as they like, repeat, etc.

One of the main pros of this method is that you pay by the ounce, instead of by the beer. This is especially beneficial in two scenarios: 1) when you come across a big beer that you wouldn’t want an entire pint of , and 2) if you try something and you don’t enjoy it, you aren’t stuck in a 12 oz commitment. 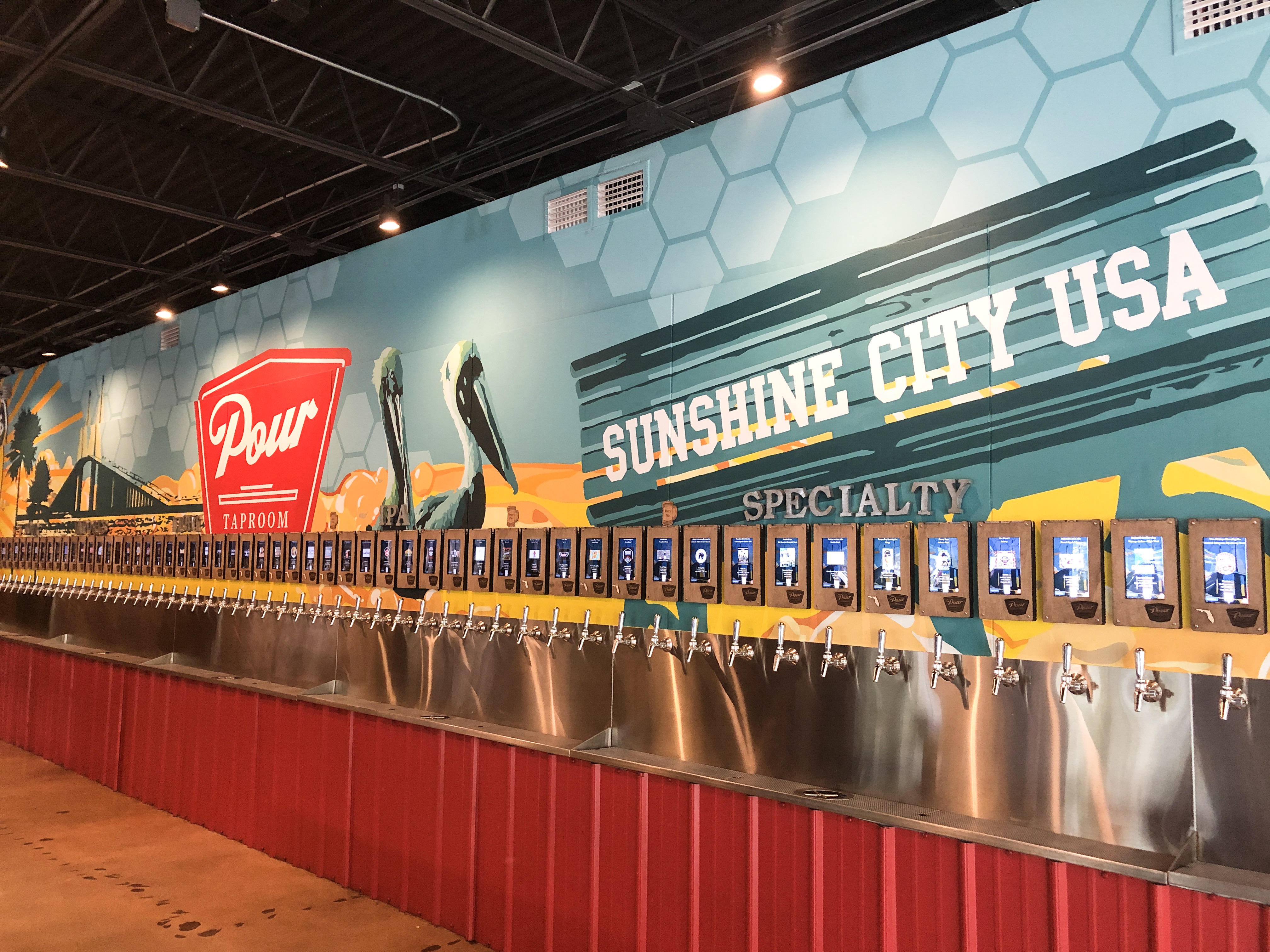 When Pour first opened their taproom in St. Pete, they offered minor bites, like bags of chips. Then, they began bringing in an array of different food trucks to satisfy hungry beer drinkers. Late October of 2018, they began operation of their very own on-premise food truck, which offers an assortment of food. From appetizers, like Pretzels with housemade beer cheese (the beer cheese is made with a different beer on tap at Pour each week!), to full-blown meals, like the Cowboy Chicken Hero, their truck has something to make all mouths water. 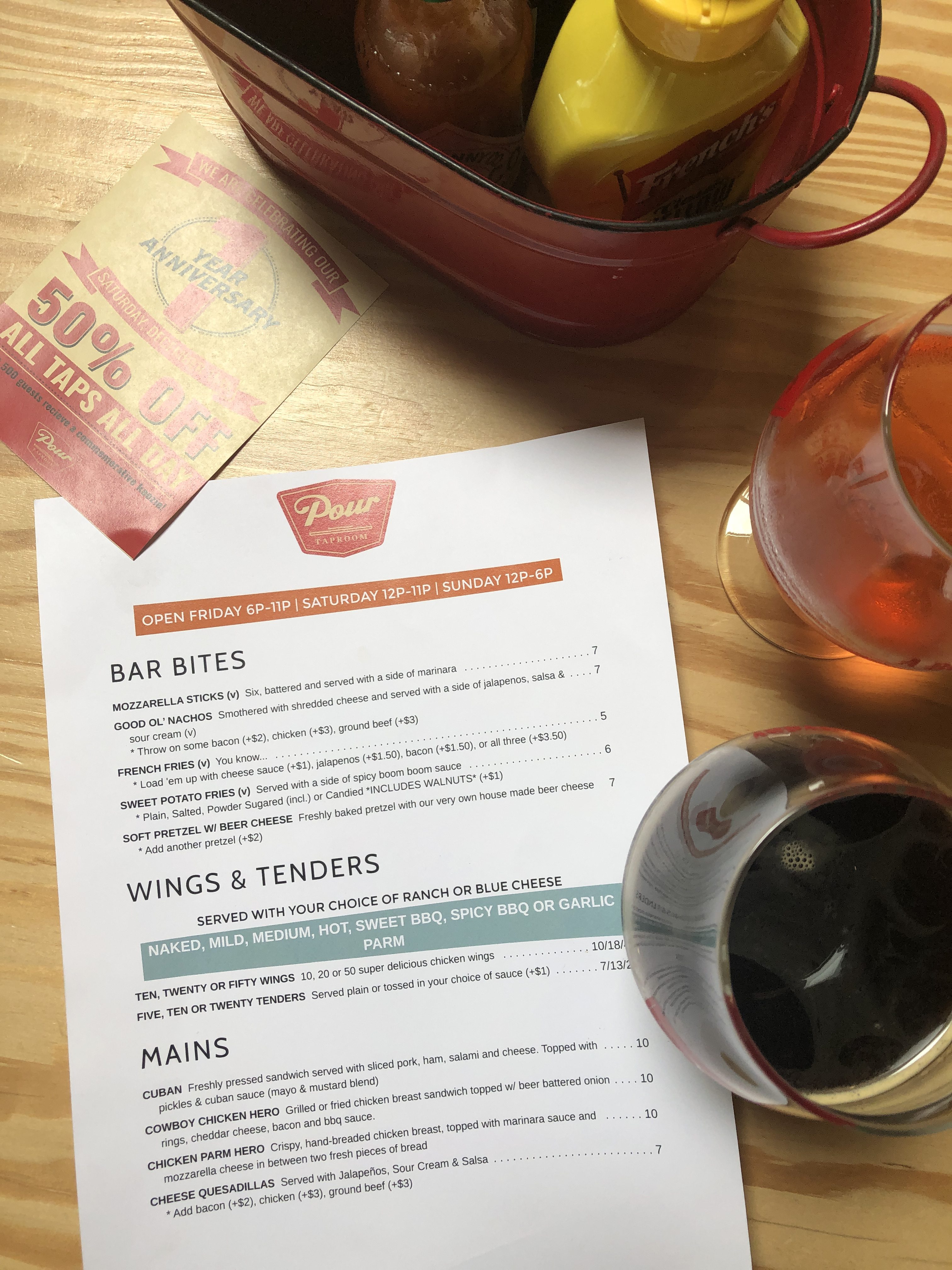 The truck sits directly outside of the front entrance of the taproom. Patrons place their order inside of Pour at the front check-in area and the food is brought in the moment that it’s ready. 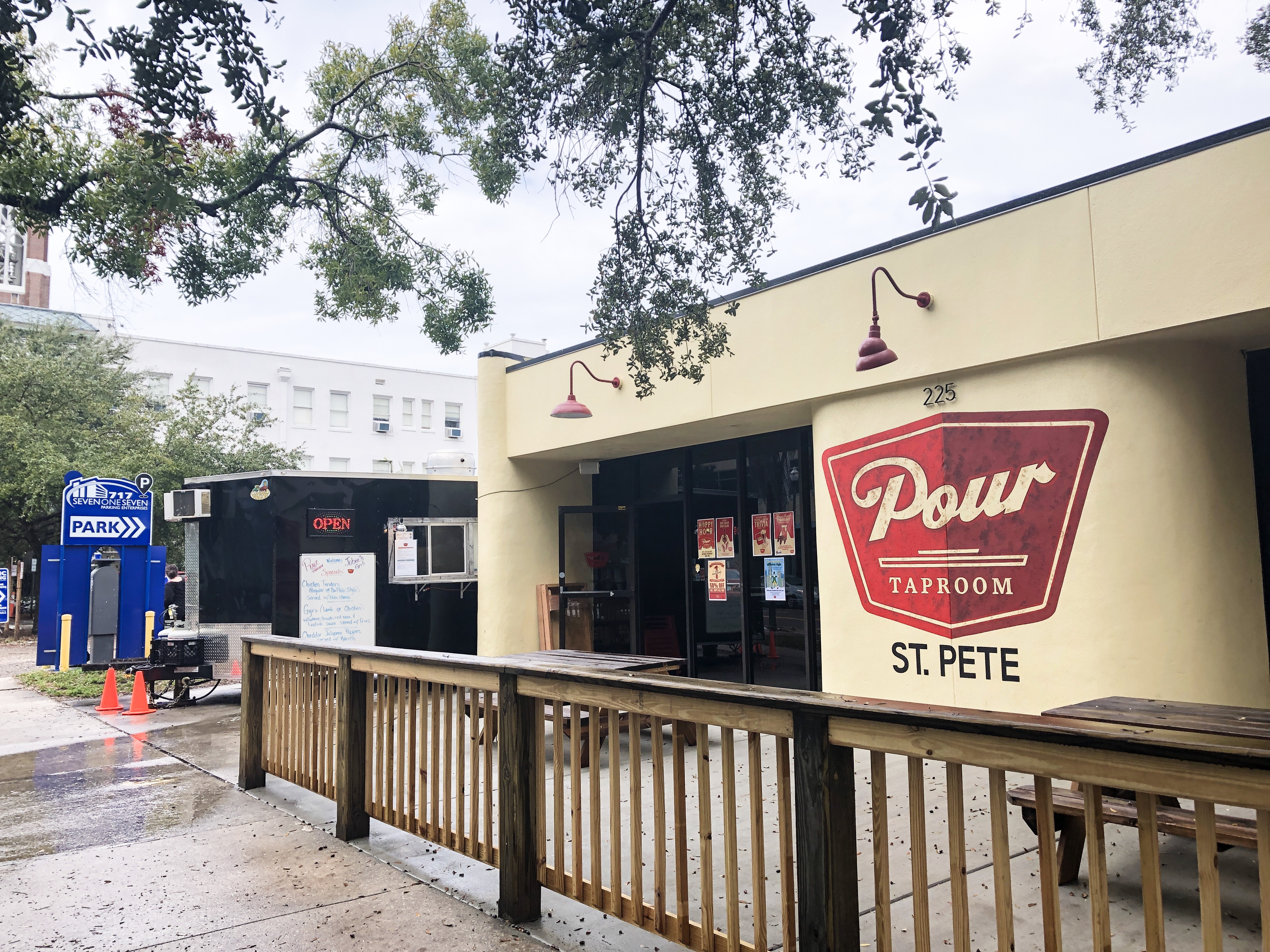 During our visit, Tanner, the owner of Pour, provided us with some pairings to go along with our food (which were spot-on!). Tanner said that we had to have the Pretzel and beer cheese, because it is the unanimous favorite. 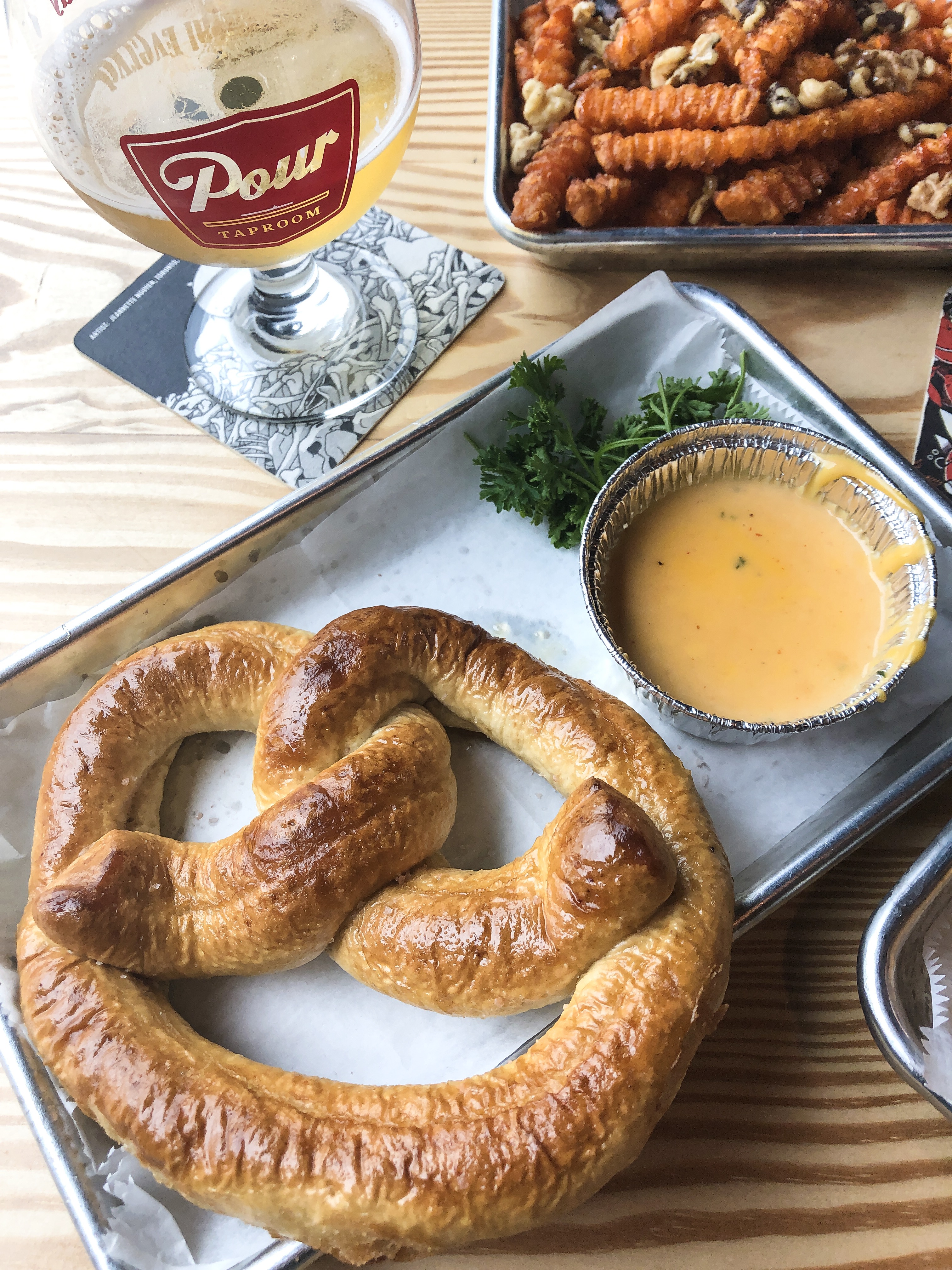 As I mentioned previously, the beer that goes into the beer cheese changes each week. During our visit, Paradise Honey Cream Ale was the featured beer in the dish and Tanner used that beer for our pairing as well. It was delightful, to say the very least, and it’s quite apparent why this menu item is the most popular. The handmade pretzel was served hot and fresh, while the cheese was nothing short of perfect. An ideal marriage of sweet and savory with notes of the beer and hints of added spice. I could’ve eaten it by the spoonful. 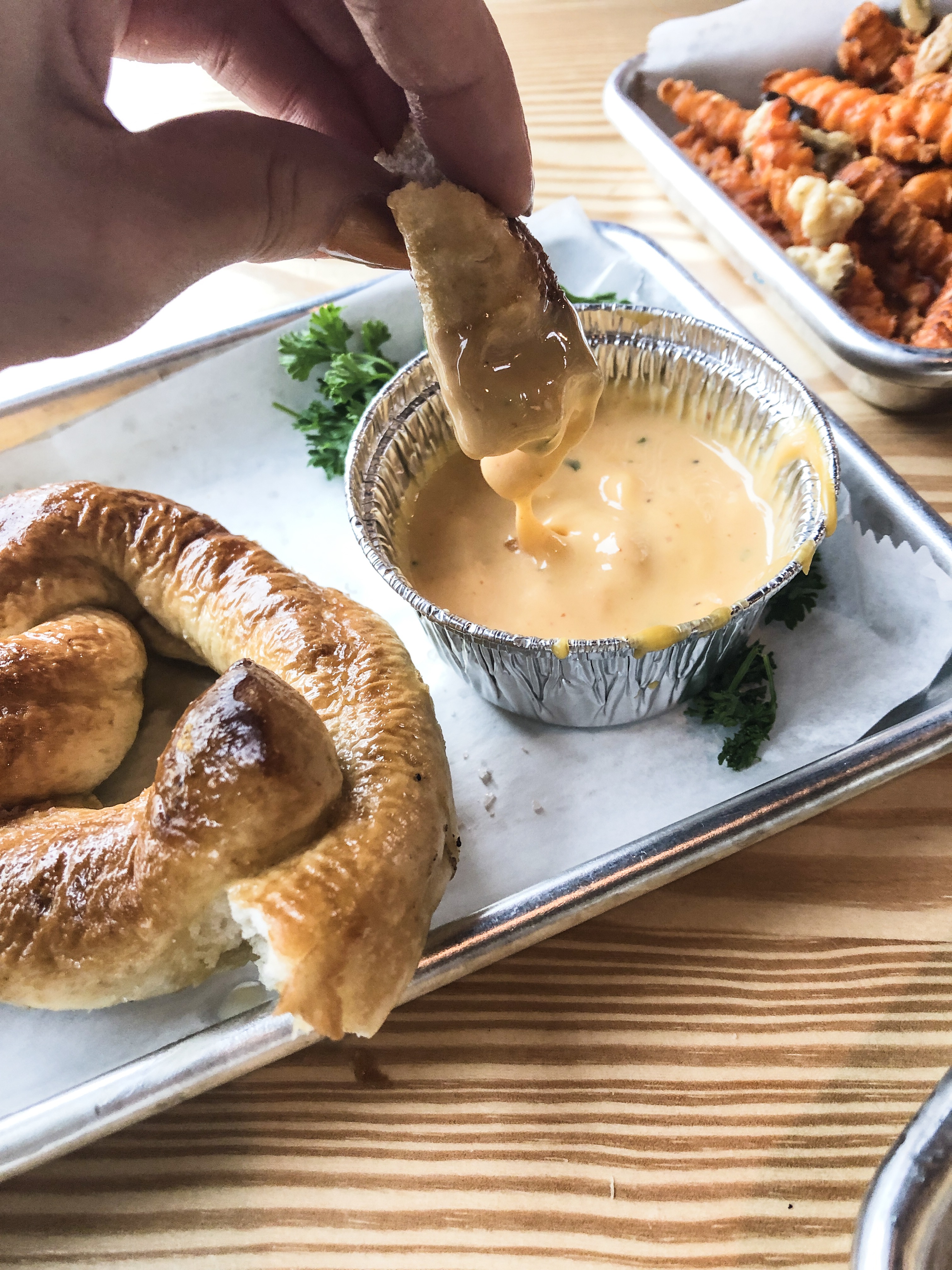 Next up, the Candied Sweet Potato Fries. With this dish, Tanner wanted us to have something big and bold to counterbalance the sweetness; therefore, he poured us St. Pete Brewing’s Goliath stout (check out our review of St. Pete Brewing here). The combination of the two are undoubtedly meant to be, and the sweet potato fries were crisp and flavorful. 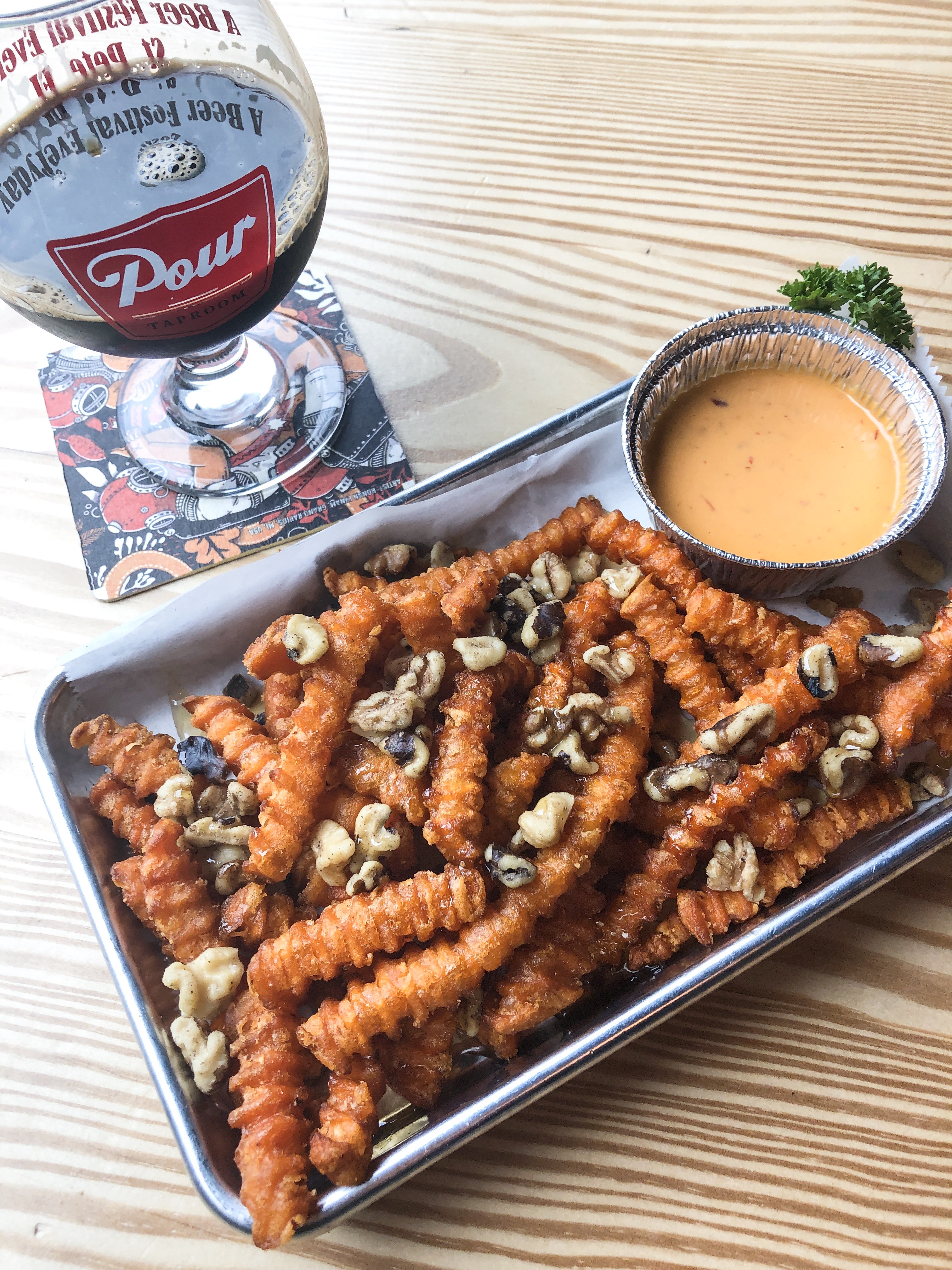 The fries are sweet, but not enough so to overwhelm the palate. When ordering these fries, each guest has the option to customize them a bit with the following options: Plain, Salted, Powder Sugared, or Candied with Walnuts (for an extra $1) and they’re served with a side of spicy boom boom sauce. We had them candied, and while they’re finger-licking good on their own, when dunked into the boom boom sauce, they’re next level. Wash each bite down with a sip of the Goliath Stout, and you’re headed for cloud nine.

Last, but certainly not least, the Cuban! The Cuban is freshly pressed with sliced Pork, Ham, Salami and Cheese and topped with Pickles and Cuban sauce, which is a mixture of Mayo and Mustard. Not only is the sandwich delicious and easy to manage, but it’s also served with a hefty portion of chips and is great to share with another person, or two. This sandwich situation nails all aspects of salt, fat, acid and heat on the head. 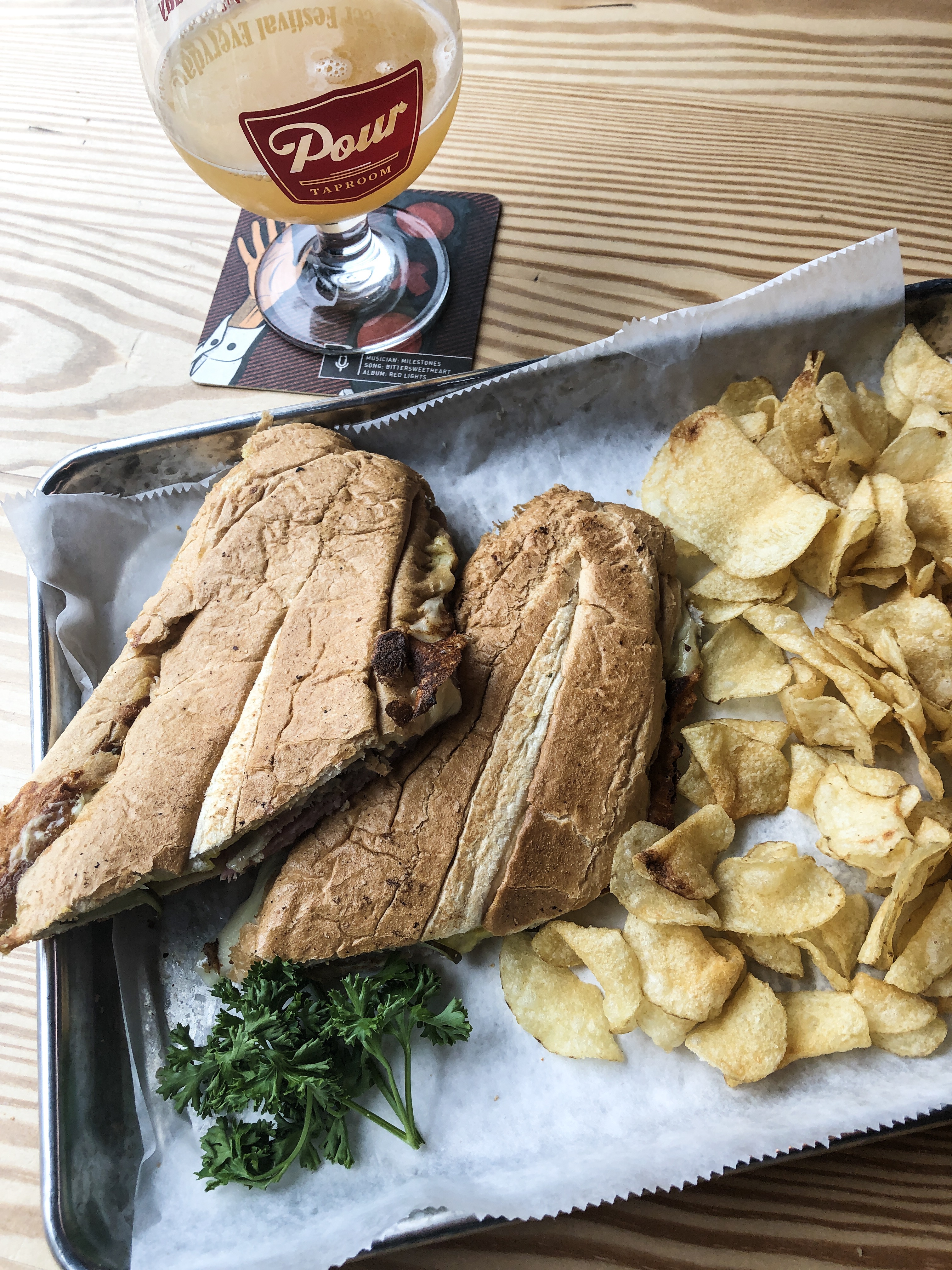 For this sandwich, Tanner poured us the Tampa Beer Works Joosy Froot. It’s a fruit-forward New England style IPA. The beer provided great fruity flavor to cut into the savory goodness of the Cuban. 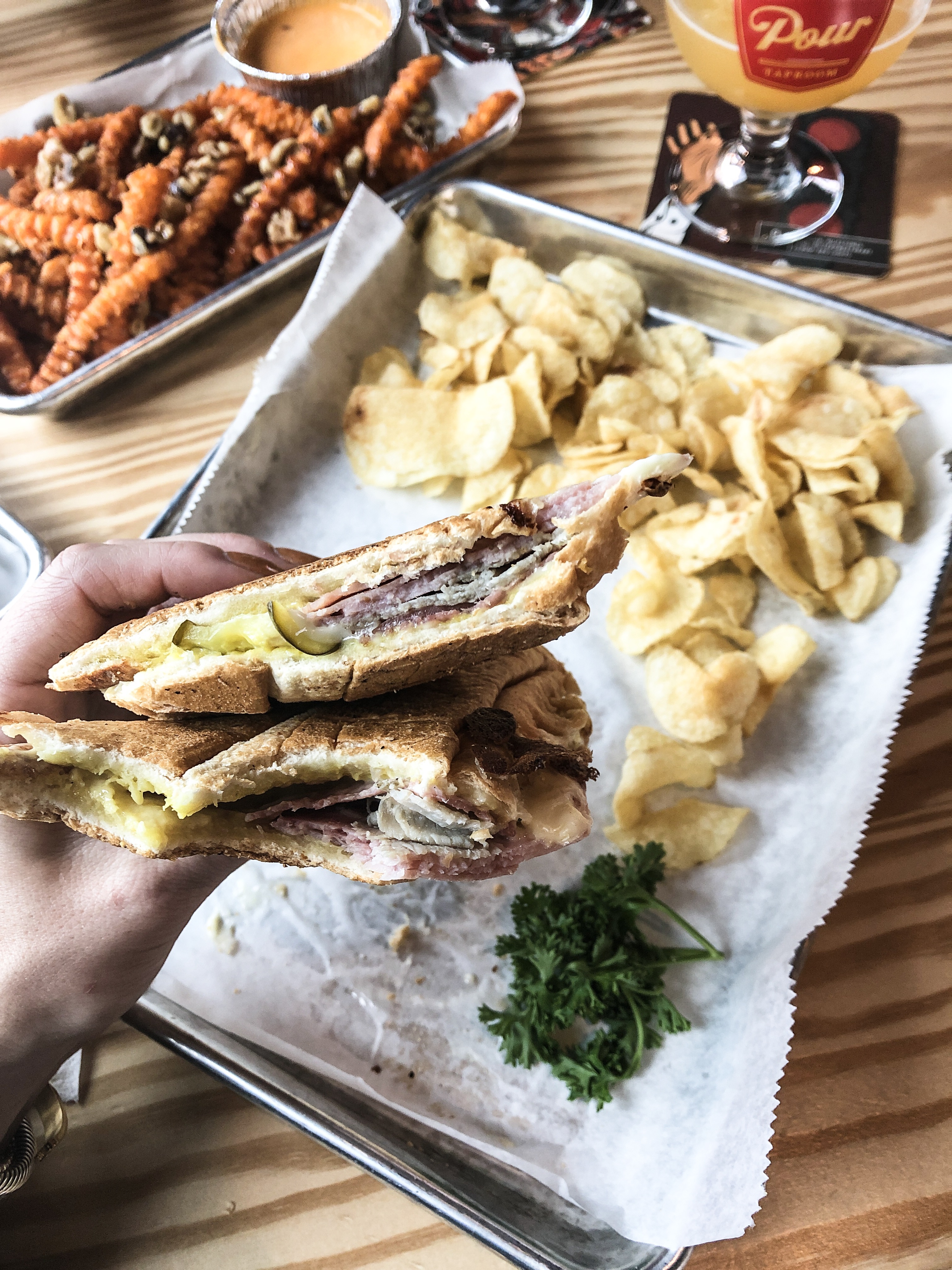 As a whole, Pour is an ideal downtown hangout. Not only do they offer incredible food and phenomenal beers on tap, but they also have offerings for the wine lovers (like me)! While you enjoy your beverage and await your eats from the food truck, the taproom has plenty to keep you entertained. Pour offers a ping-pong table, shuffleboard, board games, a handful of televisions and an abundance of seating. 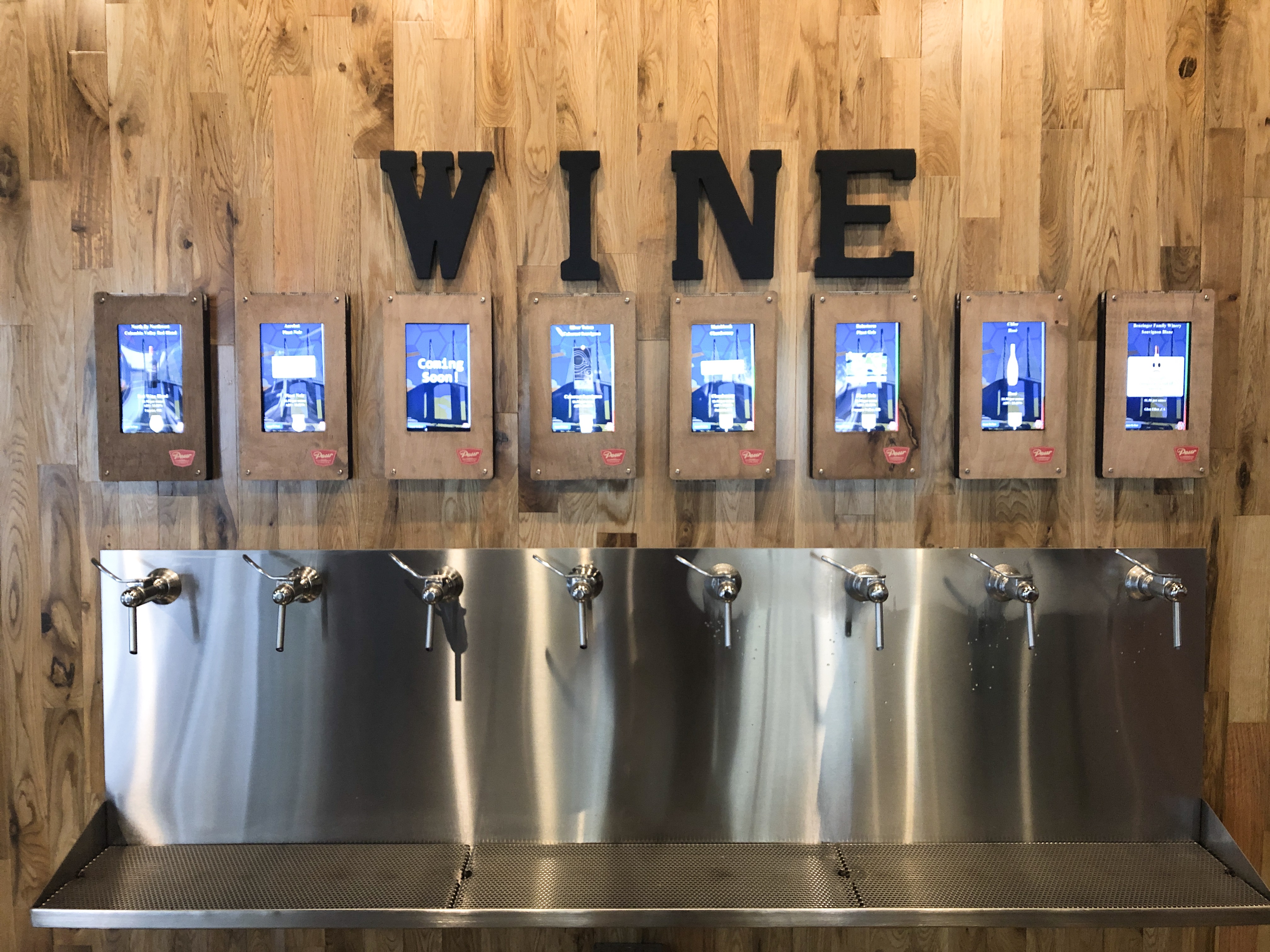 Looking to host an event? They rent out their taproom as well! Contact them for your next party- you won’t be disappointed.

If you have not made your way to Pour for a beverage and a bite, you simply must. Grab some friends, sit back, relax and make the most of all that they have to offer. 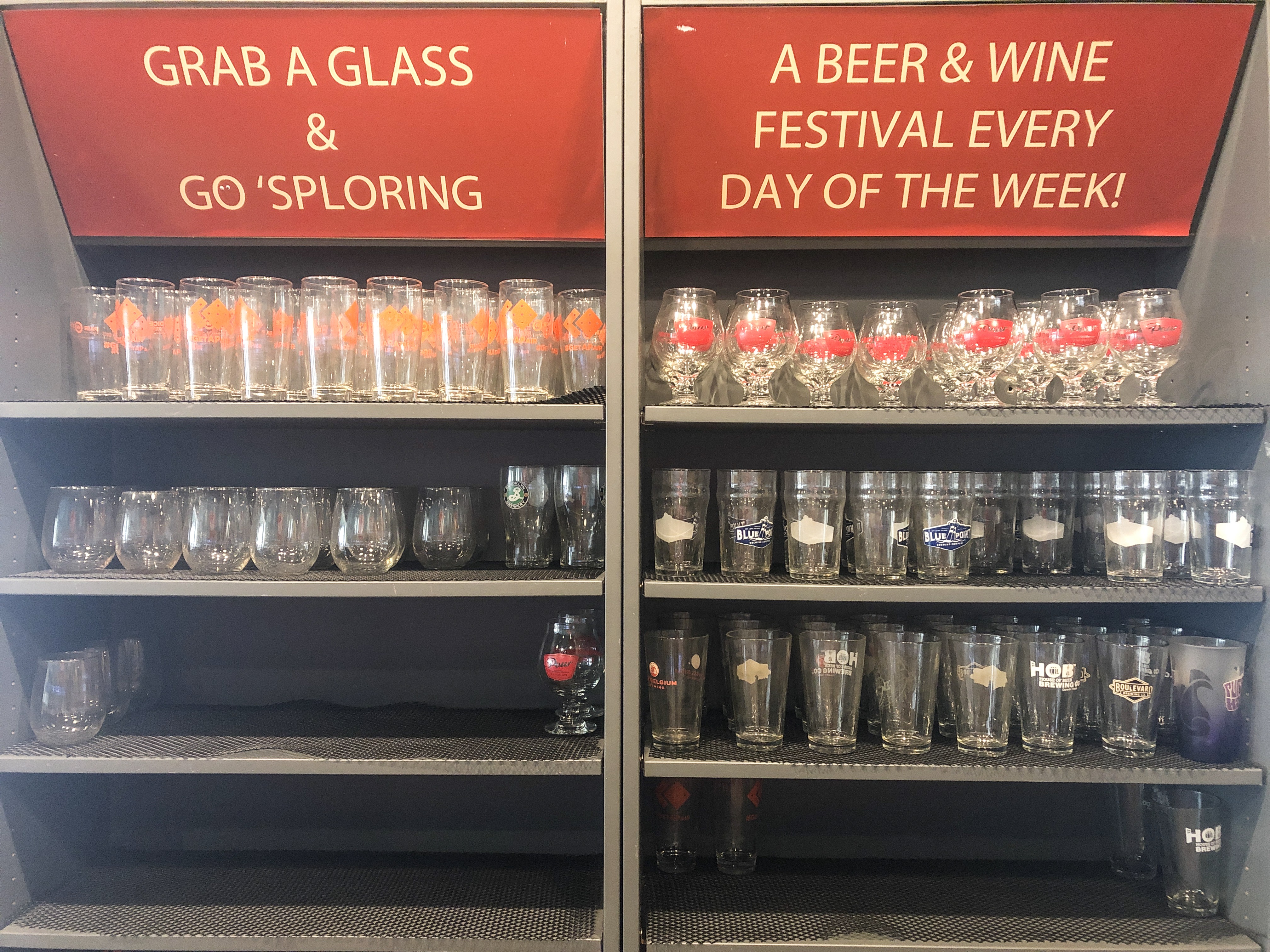 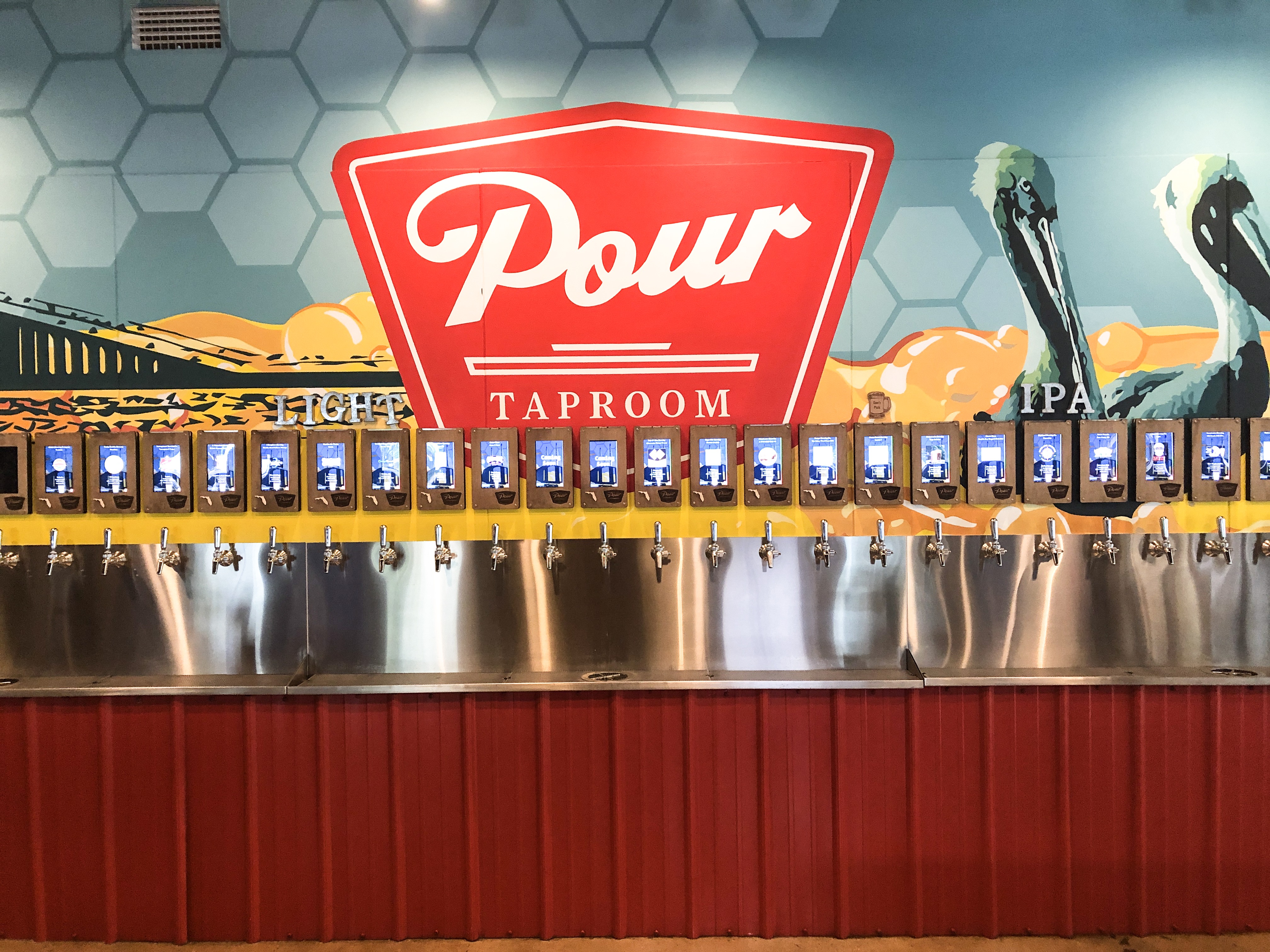