St. Pete Brewing Company: the Local Watering Hole with Something for Everyone

The first few steps into an establishment set the tone for the overall experience ahead. Everything from the lighting and music, to the decor and aroma in the air make the initial impression. In the case of St. Pete Brewing Co, the lighting was natural, thanks to the open-air garage door, the music was Fleetwood Mac, the décor was simple, yet inviting, with plenty of seating, and the aroma was that of fresh popcorn. Needless to say, it was a win in my book from the get-go. 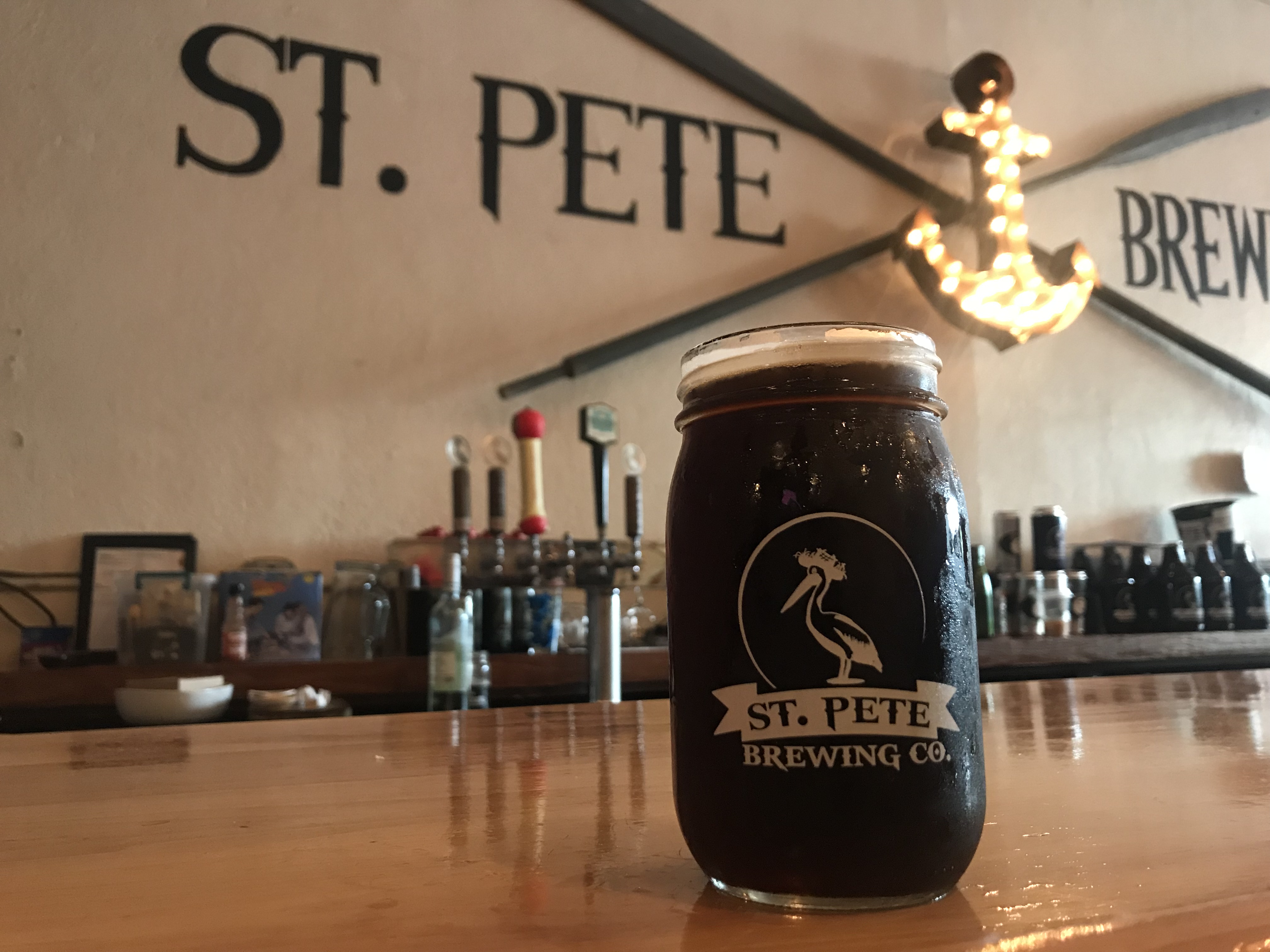 St. Pete Brewing Company was born, as most things are, out of passion. Tom Williams has been a beer enthusiast since he was a kid. While attending college at Boston University, Tom began brewing his own beer. Post college, he moved west, and then in 2003, he relocated to St. Pete, where he picked up home brewing again. After financing over 100 breweries with his finance company, he obtained a strong desire to open a brewery of his very own; however, at this time in St. Pete (2010), manufacturing malt beverages was banned. In 2012, St. Pete laws finally enabled all businesses deemed as microbreweries to produce and sell their beers. During this year, Jon McCracken, a professional brewer, was in search of a job at a brewery and was given Tom's info. One year later, Jon reached out to Tom, who had just found a location for his brewery, and the rest, as they say, is history. 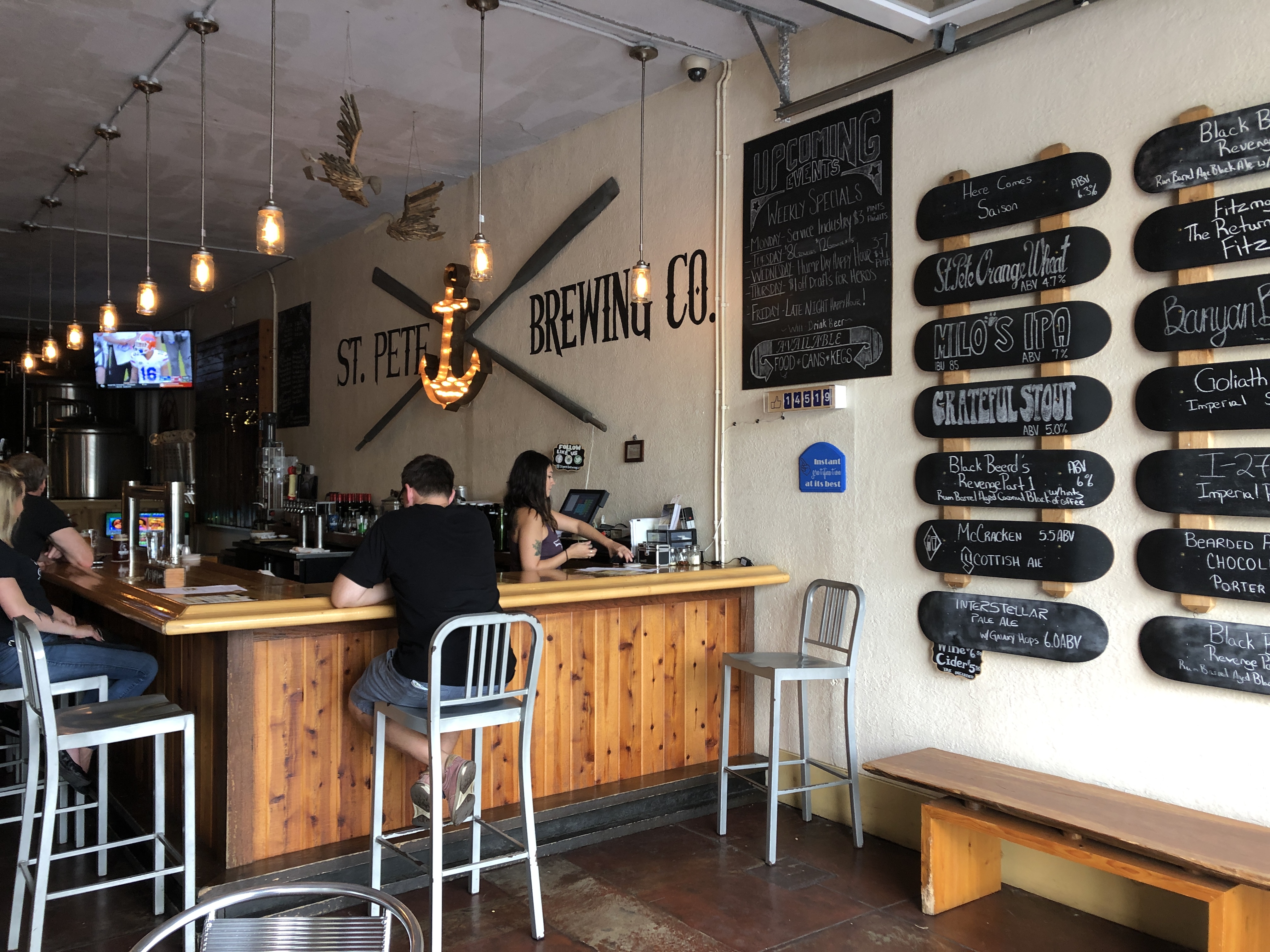 The St. Pete Brewing location is quite prime, as it is located in the 500 block of 1st Ave North, which is only steps away from downtown and Central Ave. The space is as welcoming as it is charming, and it is easy for those passing buy to stumble in, because of the garage door, which is open on beautiful days (which is almost every day in St. Pete!). Seating throughout is ample- a number of seats line the bar, a large community table runs through the middle of the establishment, a few other tables can be found throughout and outdoor seating is also available.

Looking for a space to host an event? The brewery is also available to utilize for parties and events, at no charge. The facility cannot completely close down for an event, but they can section off a space in the tasting room to allow space to decorate and provide food. In fact, head brewer, Jon, actually married his wife, Aida, in the brewery! They sat on the back table near the popcorn and tied the knot. 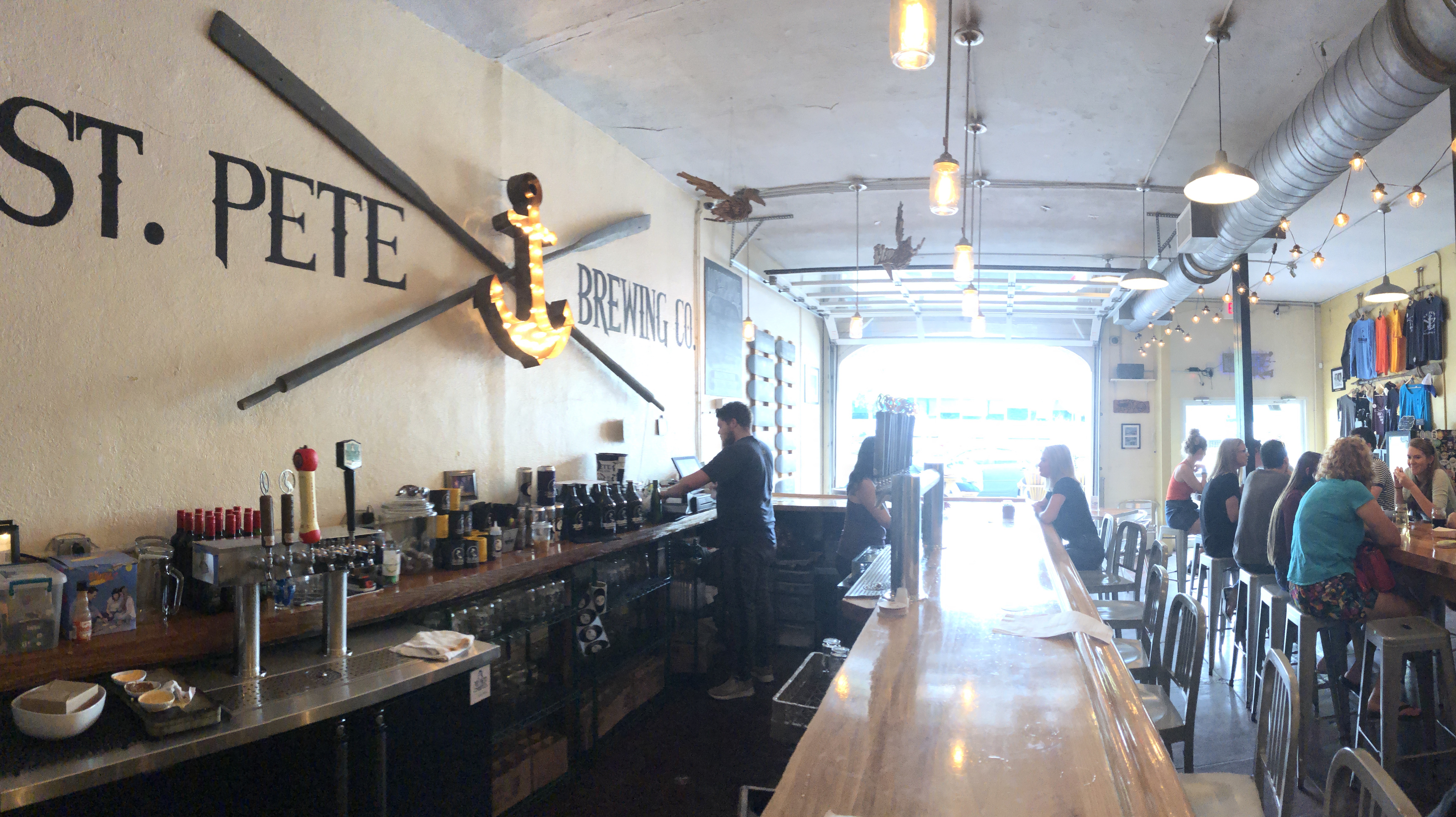 The brewery also has an area of seating around a gaming console: the ever-popular Nintendo 64...and you better believe that they have Mario Kart, to boot. Along with the Nintendo, there are a handful of board and card games, as well as life-size Jenga and Connect Four. That being said, St. Pete Brewing is an ideal spot to bring your children (during our visit on a busy Saturday, there were at least a handful of children present). 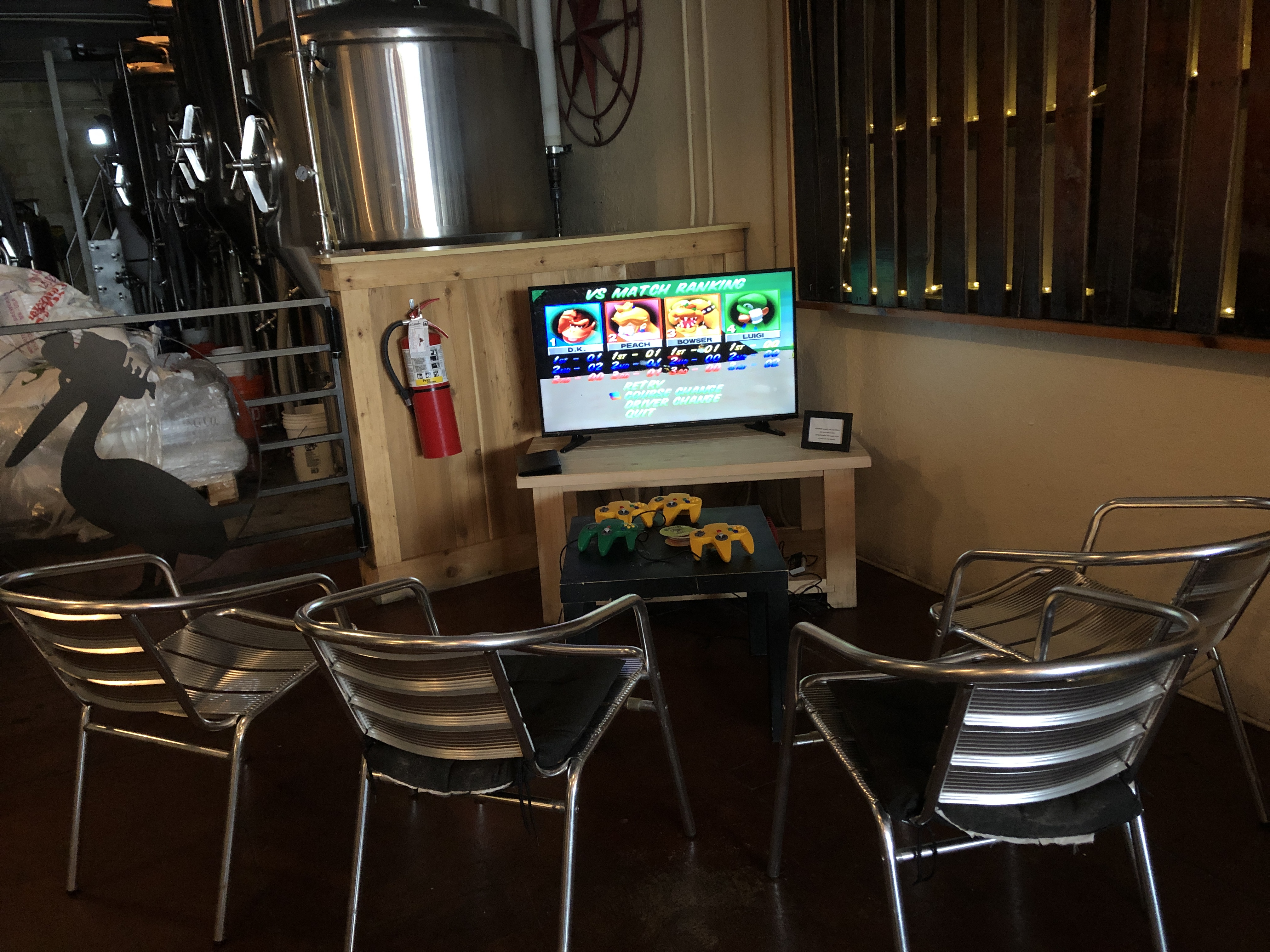 Not only is the brewery suitable for children- it's suitable for most everyone. Not a beer drinker? They have wine! Not a drinker, at all? Soft drinks and water are available! More importantly, if you're craving something to snack on with your beverage, they offer fresh popped (and free!) popcorn, as well as a menu of intriguing items from Beans & Barlour (who happen to be their neighbors). And we aren't just talking your standard fried bar food, folks. Black Truffle Burrata is involved! The offerings sound quite delectable, and are sure to satisfy most cravings, if you ask me. 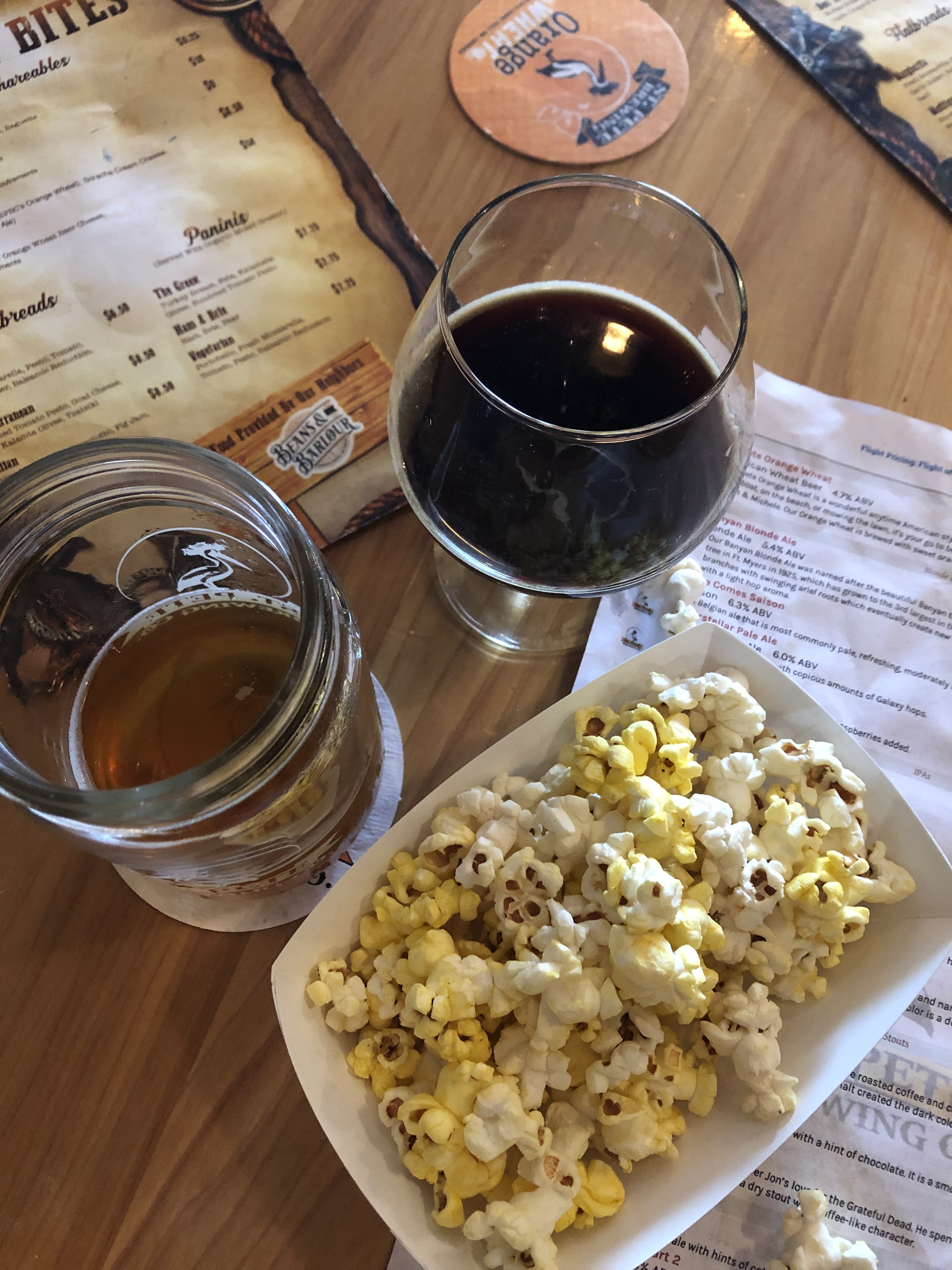 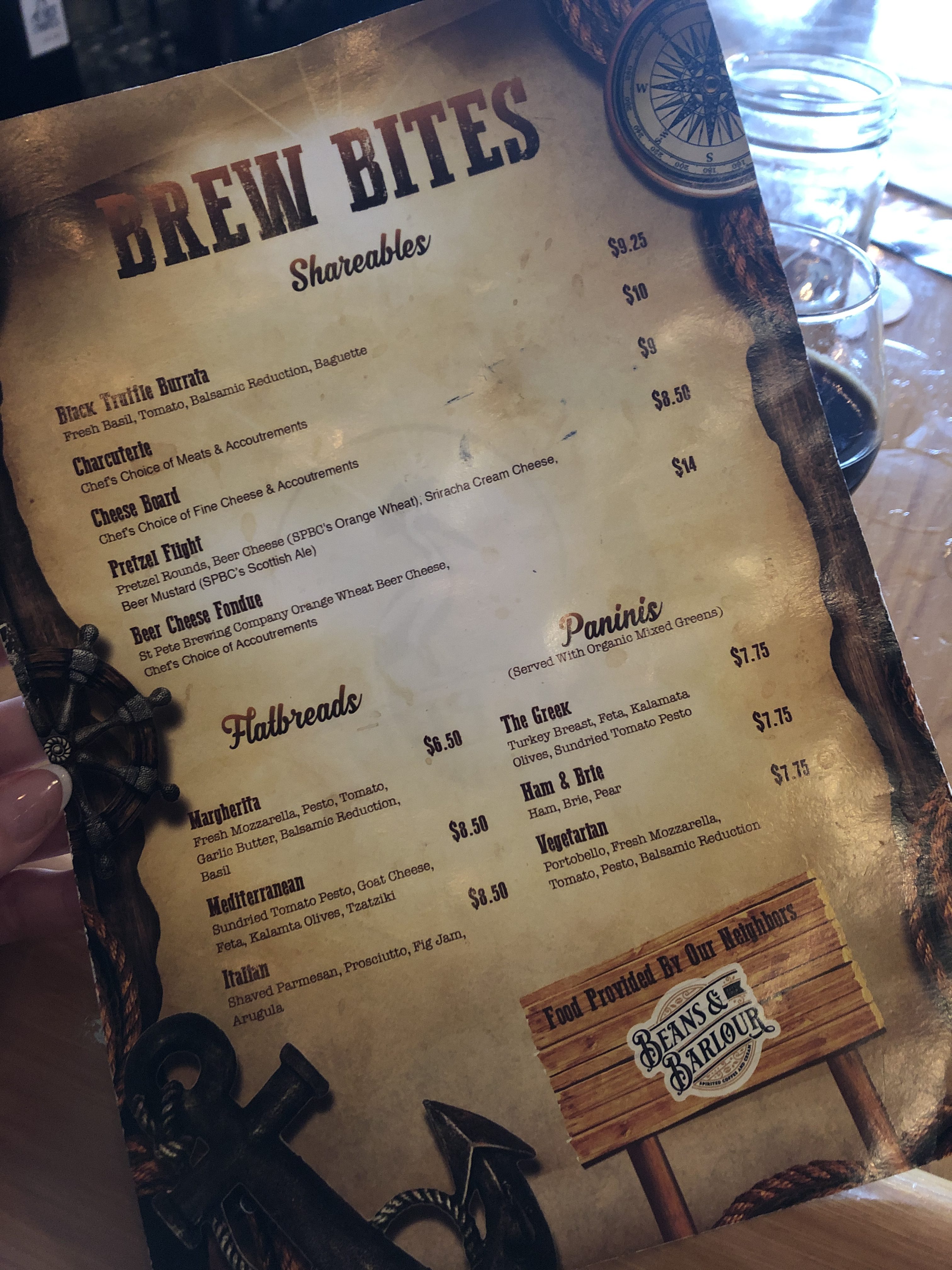 On the draft list, an array of different beers can be found. Current seasonal offerings are: the Saison, Black Beerd's Revenge Parts 1, 2, and 3, Black Ale and the Chocolate Porter. For the holiday season, Jon said that they will be brewing up a Belgian Strong Ale with Cinnamon and Plums. 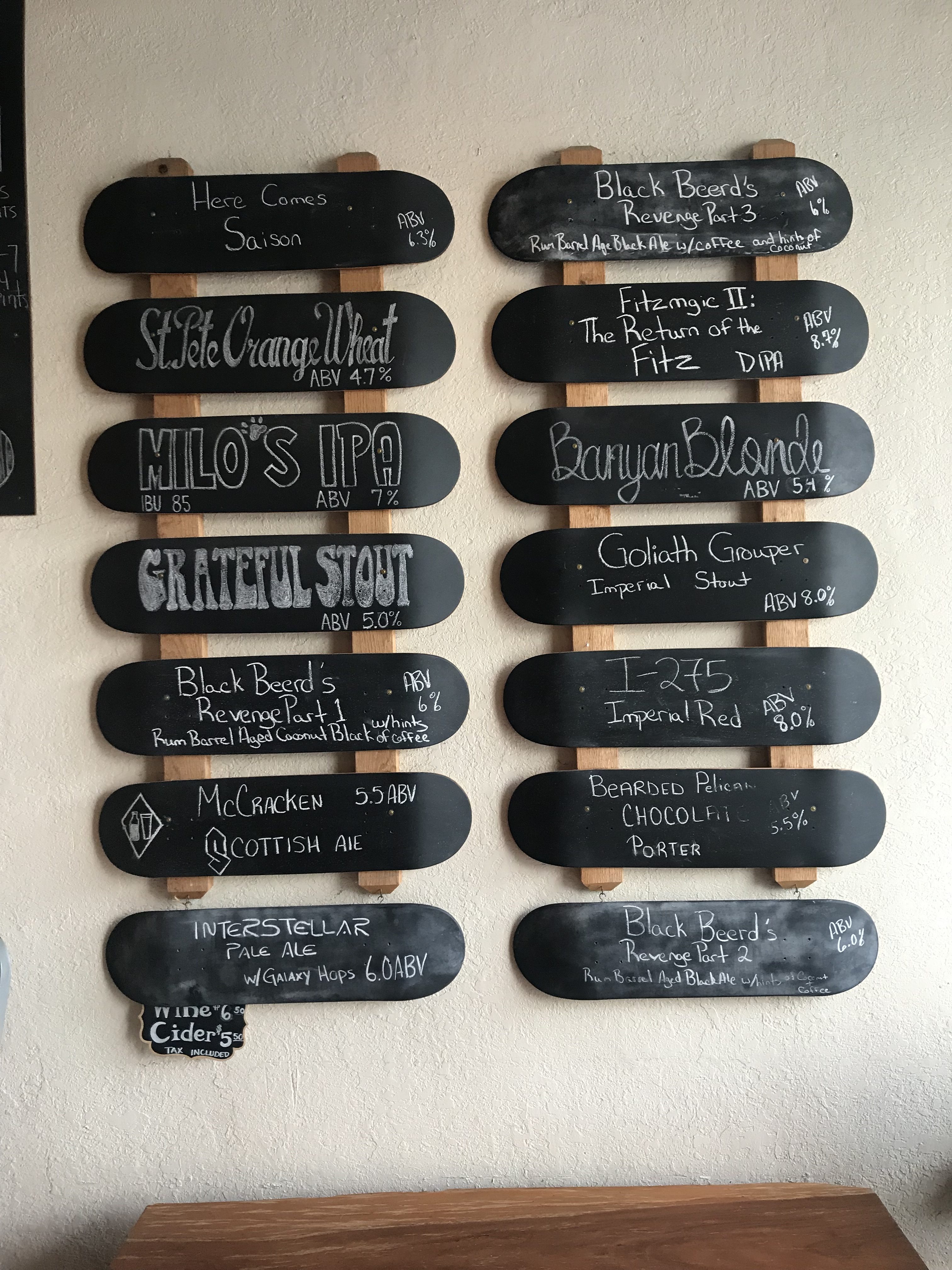 To enjoy a brew from St. Pete Brewing Co., you don't have to visit the brewery on 1st Ave North where all of their beers on tap are brewed (but, you should!). Two of their beers are available in cans: Orange Wheat and Milo's IPA (we reviewed both beers below!). Orange Wheat is their most popular beer with customers, while Milo's IPA is Jon's favorite.  You can pick those up for purchase at most convenience and package stores. Also, a number of local restaurants carry their beers, too. 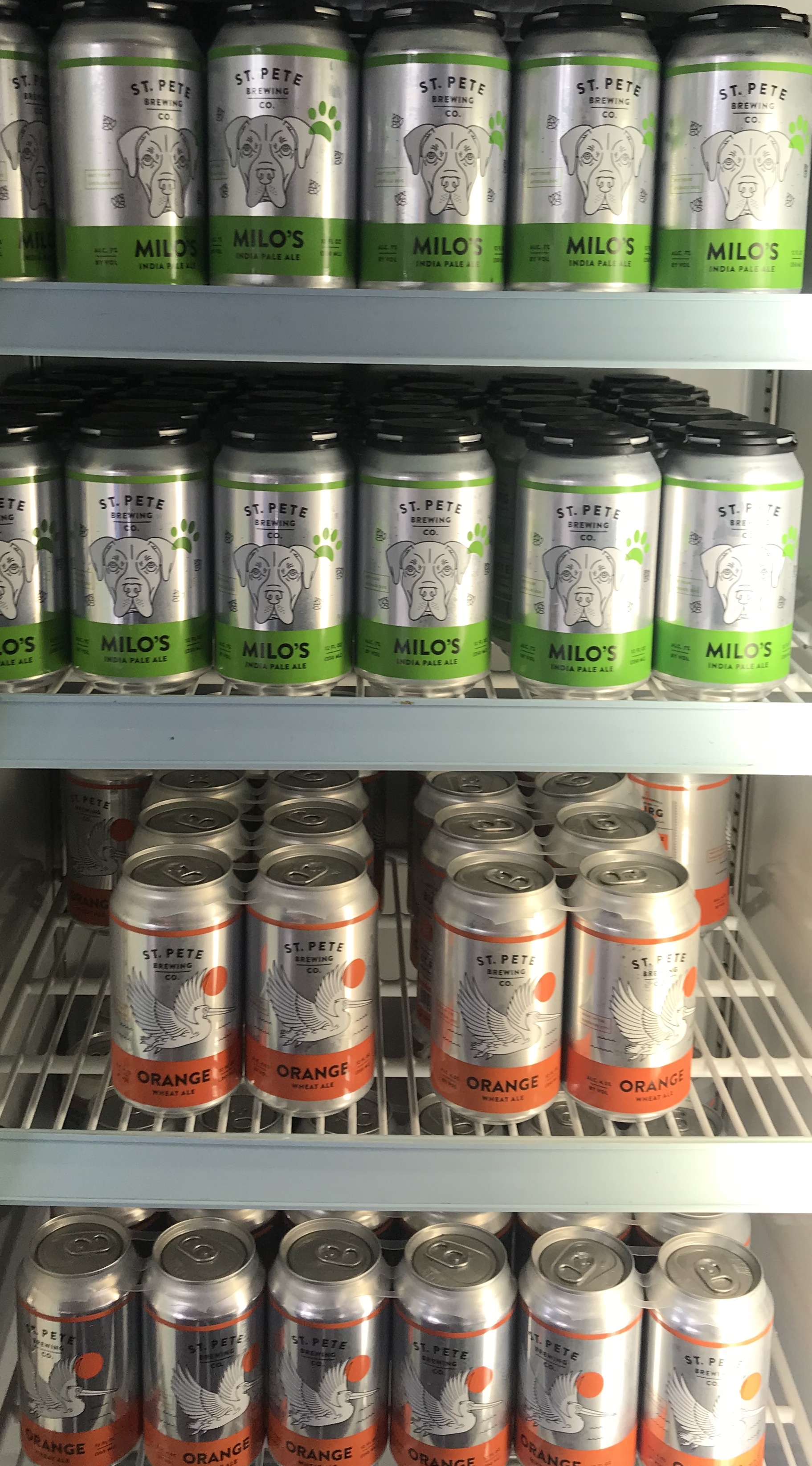 Beers by the glass aren't the only items of interest for purchase from the taproom. Other available items up for grabs include: Growler Fills, flights, kegs and merch, ranging from pint glasses ($5), to fishing shirts ($31). 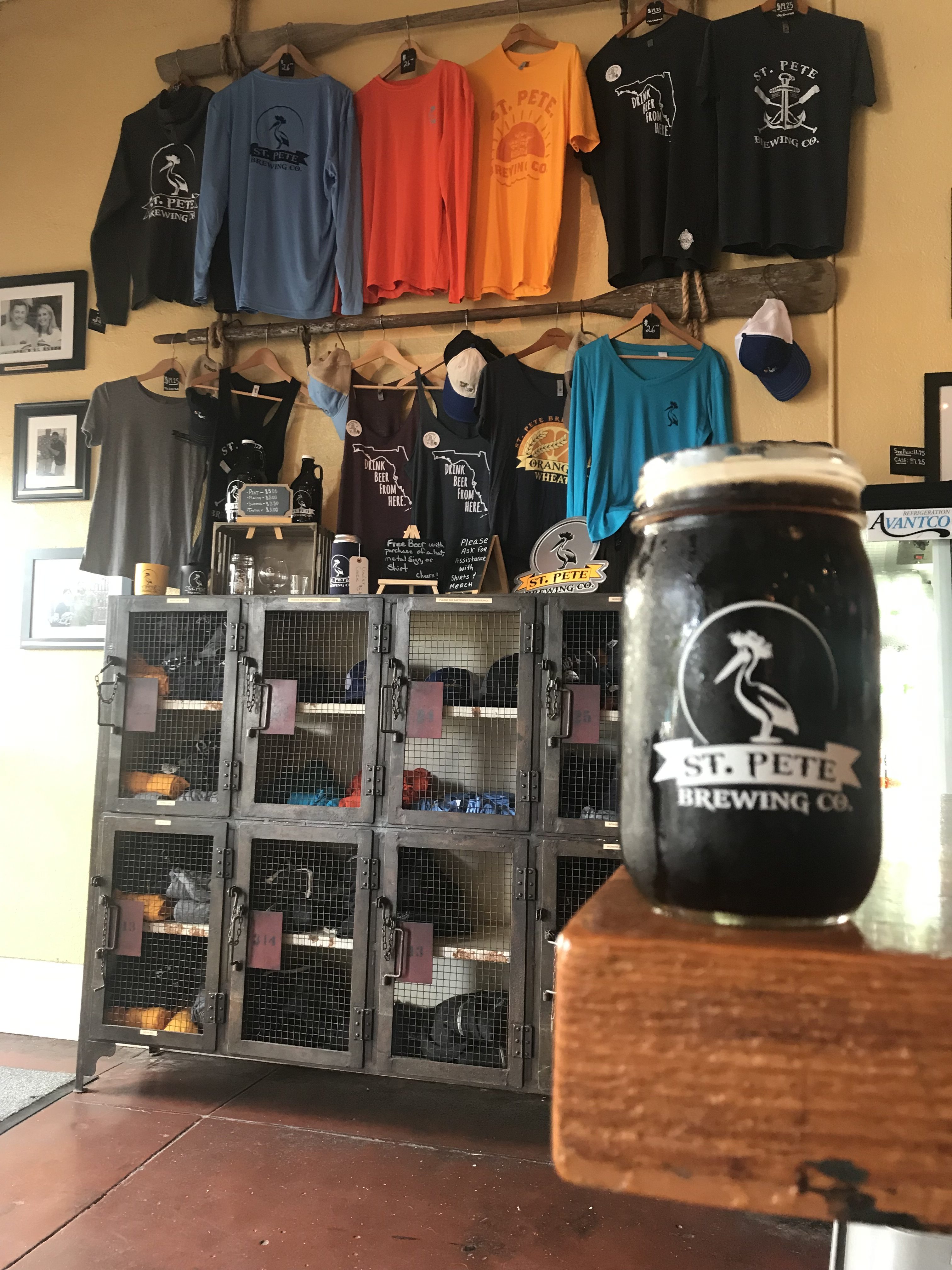 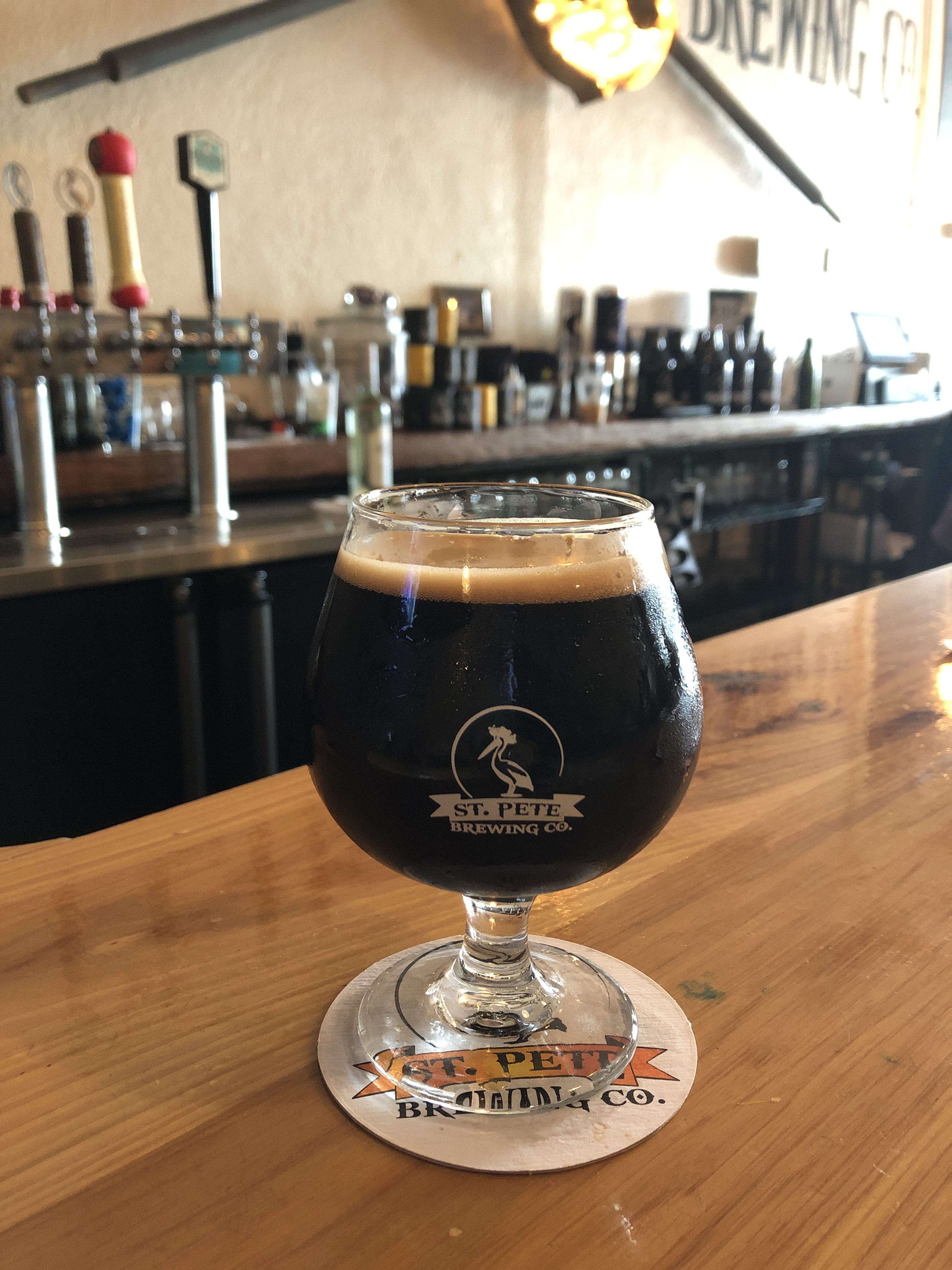 Head- Carmel/Tan and quite thick

Taste- Bright and bold, sweet Rum up front, which mellows to coffee with a hint of cocoa and spice on the back

Mouthfeel- crisp and medium bodied, not creamy or thick, as one might expect

Overall- This is a wonderful complex coffee porter with sweet rum notes up front, and slightly bitter cocoa and spire on the finish. Sure to please most palates. 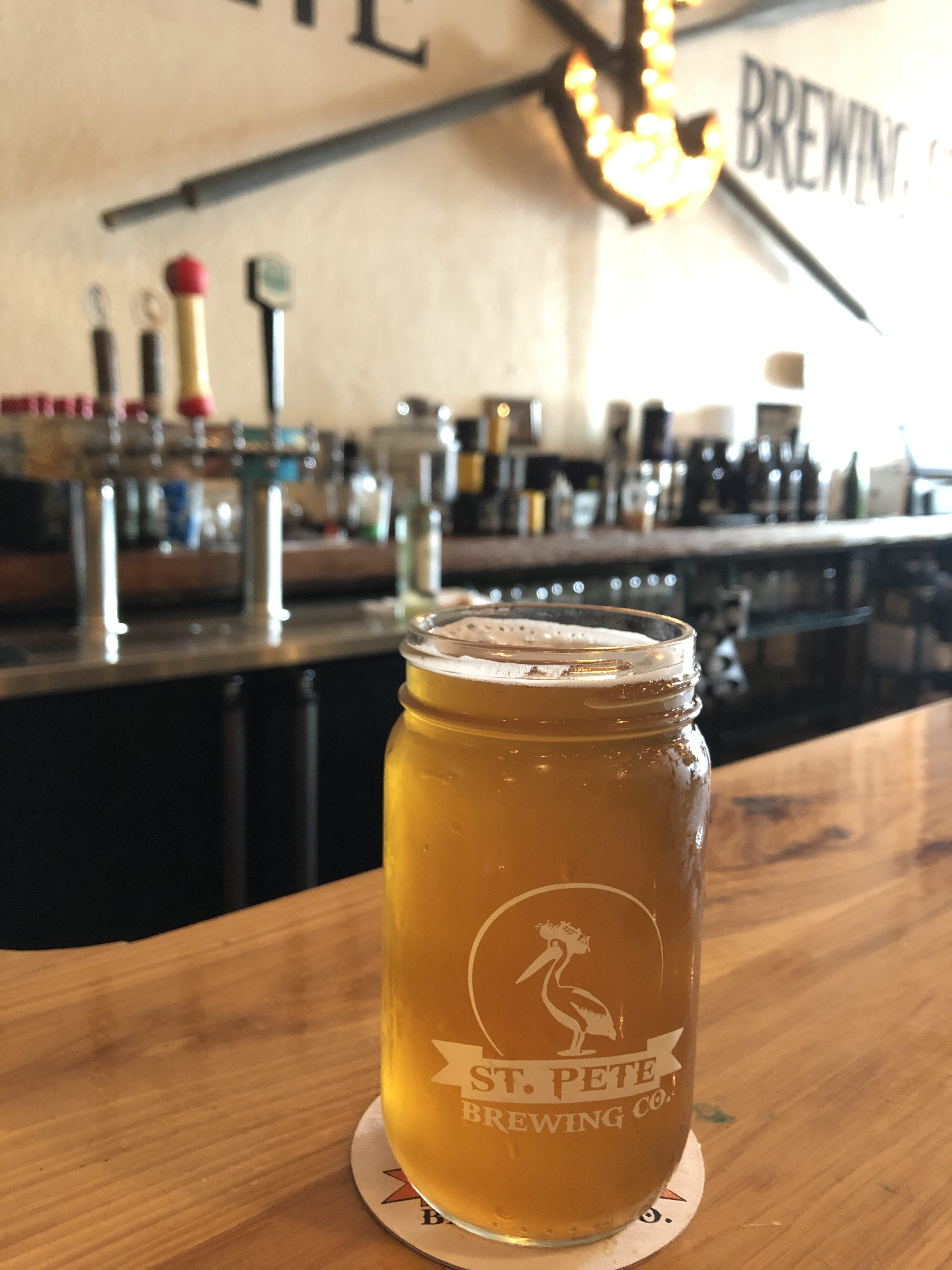 St. Pete Orange Wheat is a wonderful anytime American style wheat beer with a crisp hint of orange and coriander. Whether you are out on a boat, on the beach, or mowing the lawn, it's your go-to beer for quenching your thirst. This is the first beer produced for the public by Tom and Michele. It is brewed with sweet orange peels and coriander seeds that provide crisp, fresh aroma and taste.

Overall- A bright and refreshing, easy-drinking brew that could easily be consumed during most any occasion and time of year.

Food Pairings- Works really well in a crock pot as a liquid for ribs and pork butt. Also pairs well with pasta and chicken. 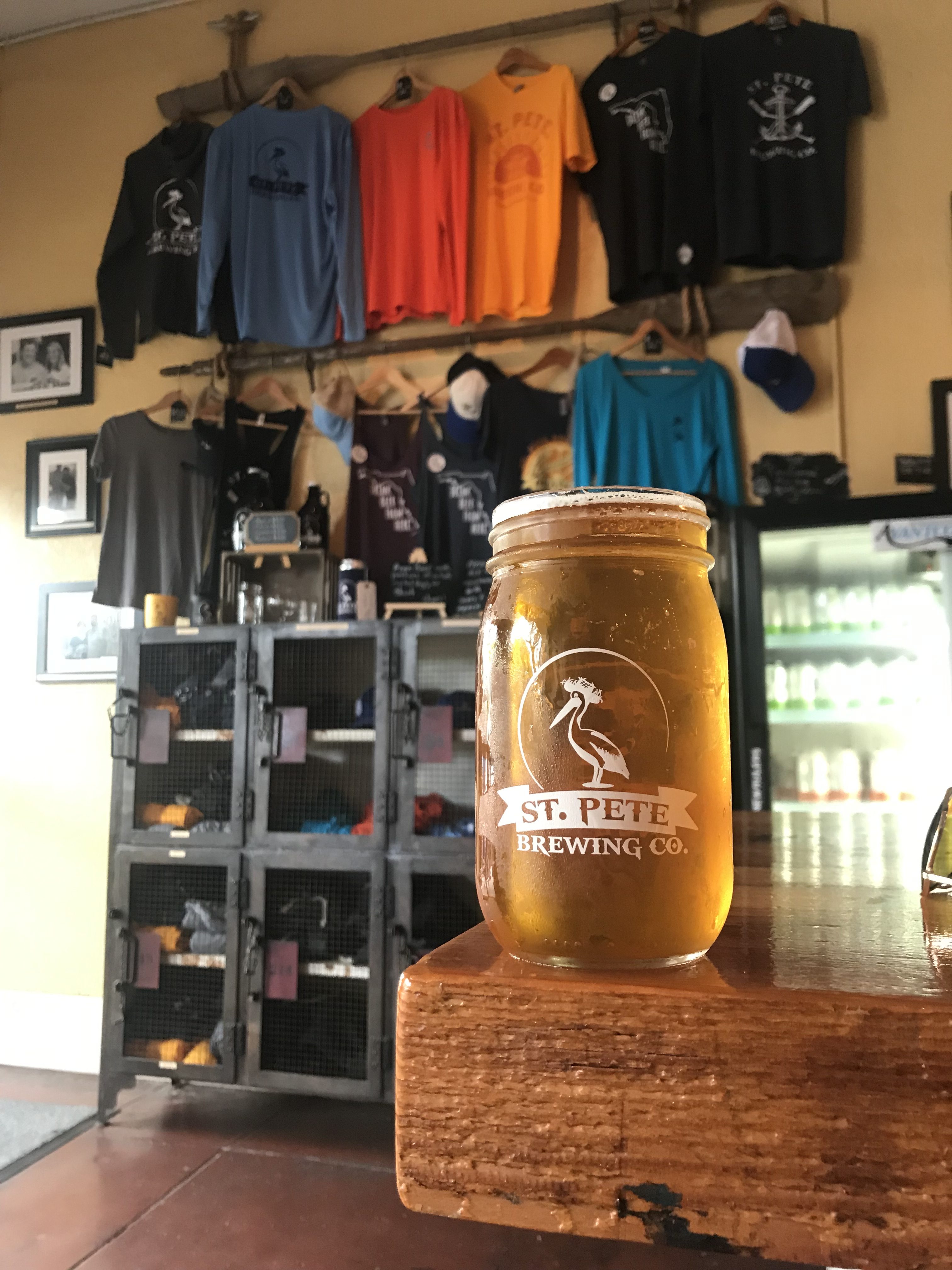 Milo's IPA was created by head brewer, Jon, in celebration of his dog, Milo. Milo's IPA is a medium bodied west coast IPA with 6 hop additions of Northern Brewer and Chinook.

Head- Medium-thick for an IPA, fluffy with a touch of lacing

Taste- Bitter citrus. Zest up front, followed by hops, and then pine, which lingers on the back-end

Mouthfeel- Clean and balanced. Sticks to the roof of the mouth more so than on the tongue

Overall- A solid medium-bodied west coast IPA with hints of pine and citrus that deserves your attention. 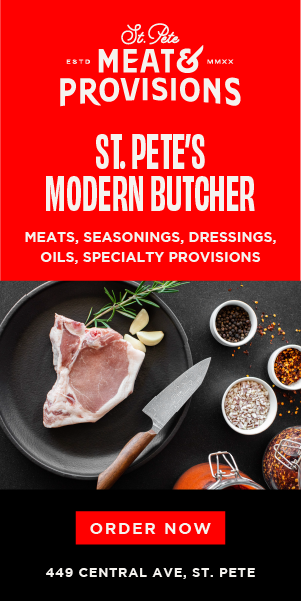