I LOVE grits! I've been eating them since I was a kid, and it was always for breakfast, and always cooked, not the instant crap. With a ton of butter and salt, sometimes with cheese, and sometimes with an over easy egg on top.

Shrimp & Grits is also one of the most popular ways to enjoy this ground corn product. These days more places are adding grits to their lunch and dinner menus, and getting quite creative with the extra ingredients.

Fun Fact: Grits are most popular in the south, and a lot of the popular southern food originated from West African slaves. However, grits originated with Native Americans in the south.

For this Top 10 Best Shrimp & Grits in St. Pete, I concentrated on the more kicked-up versions for most of them. However, one of my criteria is that the grits must stand on their own to make this list. Relying on all the other stuff thrown in there to flavor the grits doesn't cut it with me.

Also, as I continue to gain more life experience, and try more foods, I've learned that I prefer my grits to have a more coarse grind over a finer grind. I also prefer them less watery. Some places didn't make my list of what I like because they served watery, fine-ground grits. Sorry. Not a fan. They remind me of instant grits.

This is not an exhaustive list. There are many more places in the area that do a great job, but after eating all of these, I have had my fill of shrimp & grits for now. Plus, a top 10 list is a lot of work when you actually go to all of the places and eat all of the food. Most of the other top 10 lists on the Internet are either auto-generated by people mindlessly clicking on star ratings, or by an actual writer that never left their house and just downloaded photos.

We'll have some honorable mentions at the end too.

These are not ranked from best, to second best, and so on. We've come to feel that is not a good way to do it when they are all amazing executions of this popular dish.

These are listed in alphabetical order. <------ Look 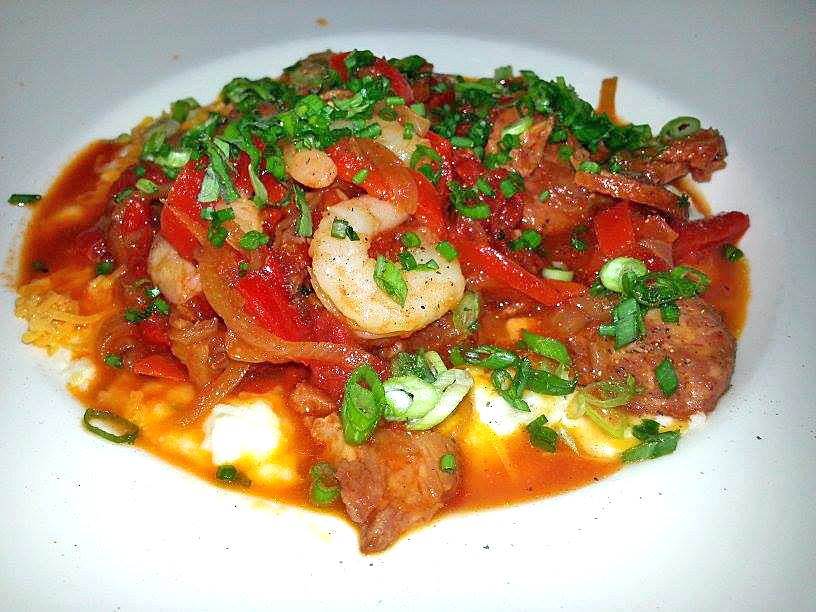 On the brunch menu served daily 8am — 3pm is the Andouille Sausage & Shrimp Ragout at Cassis. This has been one of my favorites for the last nine years. It's a hearty portion of andouille sausage slices, shrimp, roasted peppers, caramelized onions, and cheddar grits. I'm usually quite full after this one. 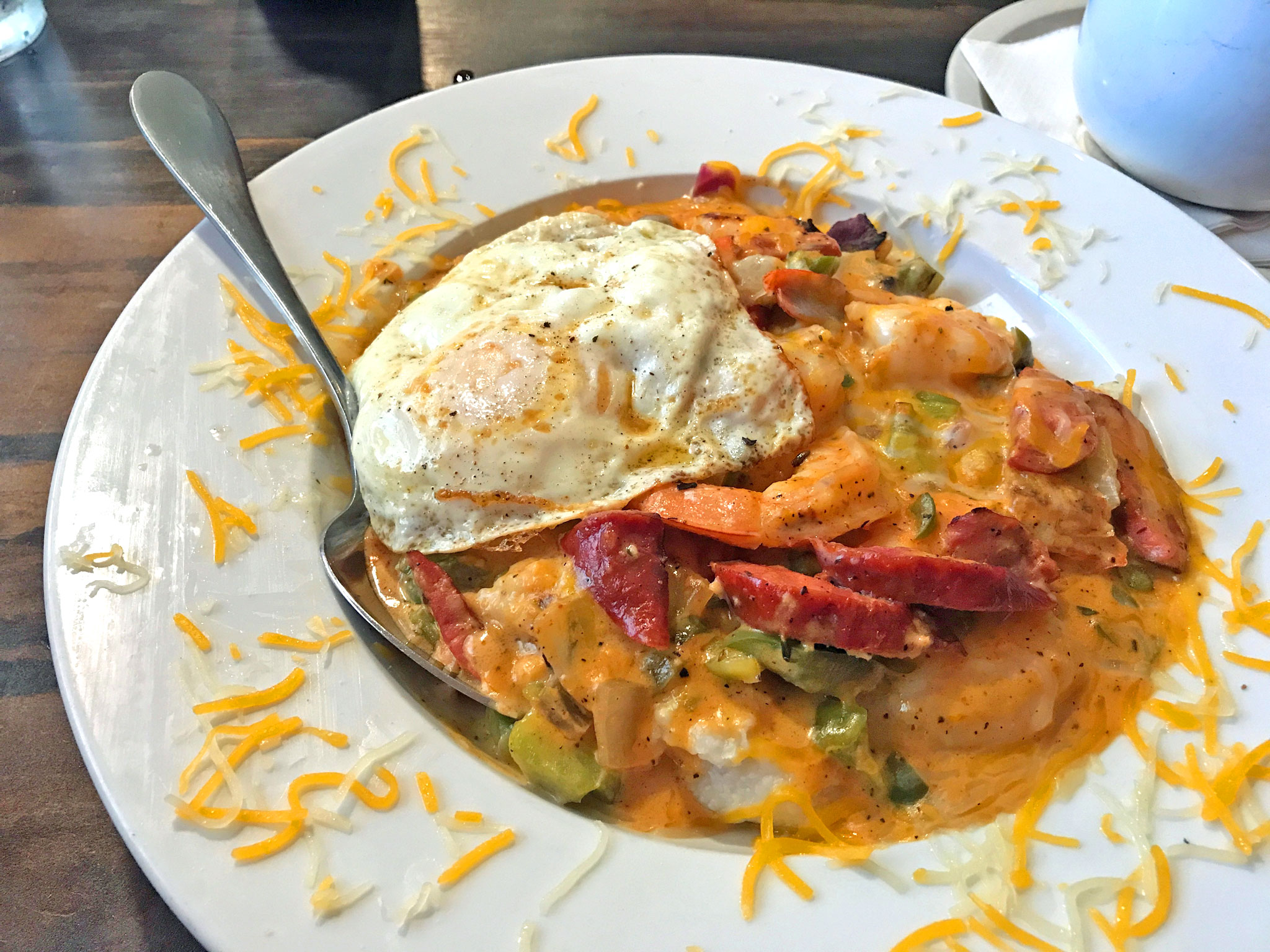 This is another one for the large appetite. It's substantial, rich, and full-flavored. Chill is one of the go-to places on St. Pete Beach for locals and tourists alike.

Creole style gulf jumbo shrimp sautéed with Andouille sausage, onions & green peppers in a special sauce, served over cheesy grits with an over easy egg in the middle.

On the breakfast and brunch menus starting at 8 am. 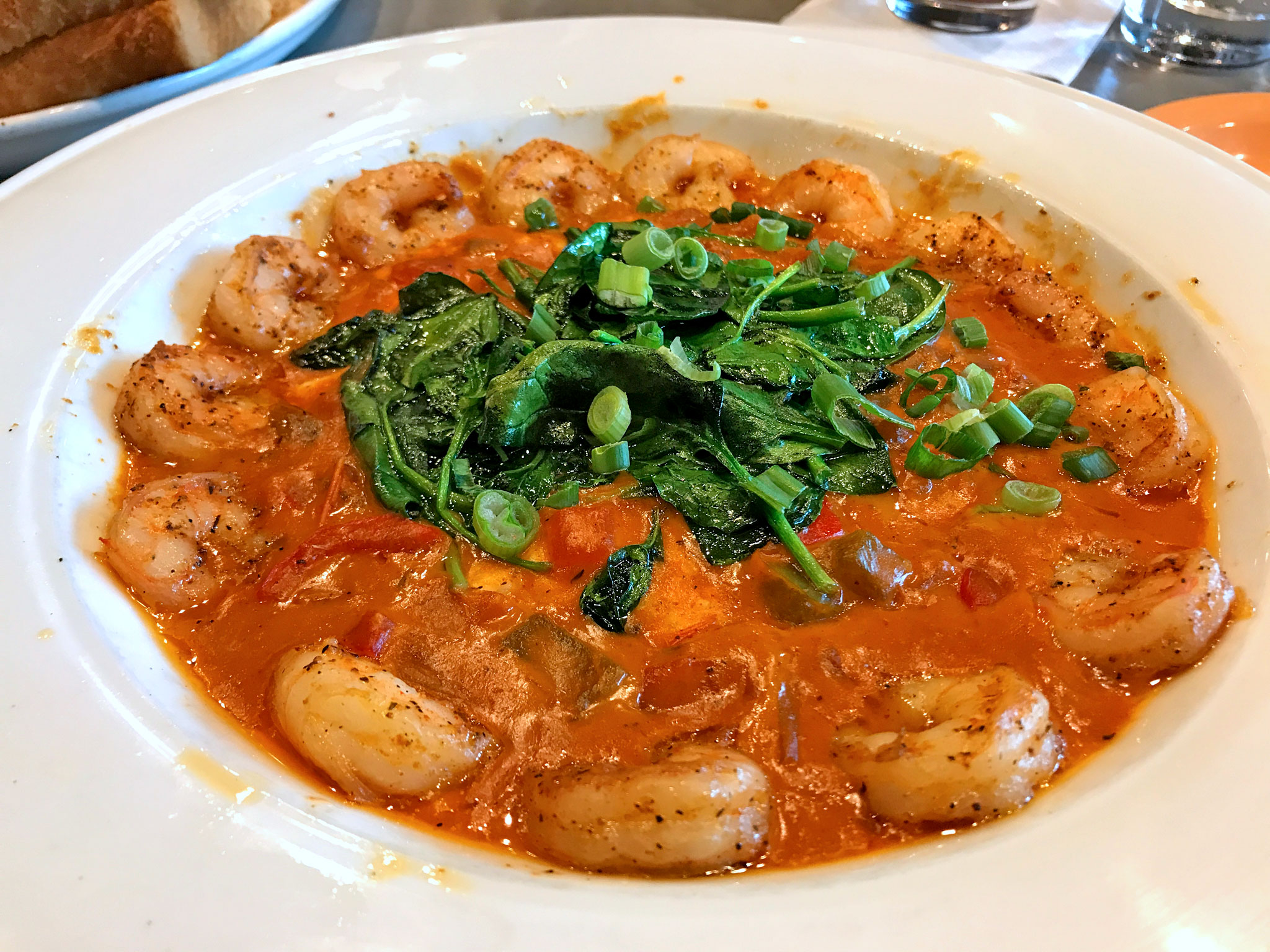 Datz's shrimp & grits are definitely rich and flavorful. The shrimp have a creole seasoning, there's cream cheese, and if that's not enough luxuriousness, there's the Indian Makhani sauce. Makhani is an Indian word meaning "with butter", but there's also lots more going on with this sauce. It's made from tomatoes, fresh cream, cashew nuts, onions and lots of Indian spices—cloves, cumin, chili powder, garam masala, and more.

Datz is known for having some over-the-top foodie creations. Sometimes you need to have that, and this one delivers. 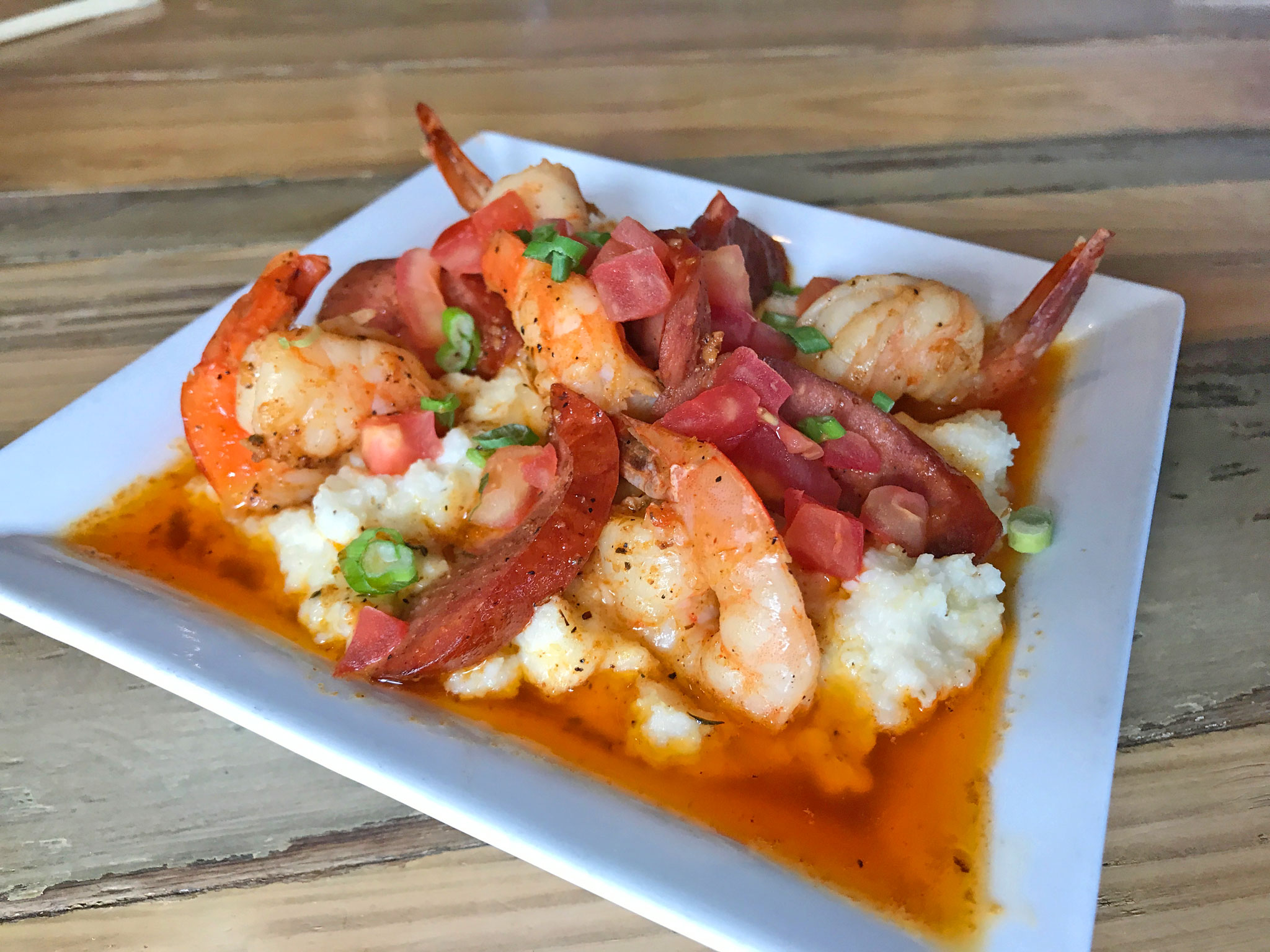 The "Baby Go" is The Lure's take on shrimp & grits. This one also has Andouille sausage slices, which are charred, along with sautéed shrimp in a garlic white wine butter sauce over smoked Gouda grits, garnished with scallions and tomatoes. It's also hearty in its make-up, but being on the tapas section of the dinner menu, it is a smaller portion. It will still fill you up, but you will have no problem getting up and walking afterwards. Note: The Lure offers the dinner menu tapas all day, so you can still have this for brunch or lunch even though it is on the dinner menu. 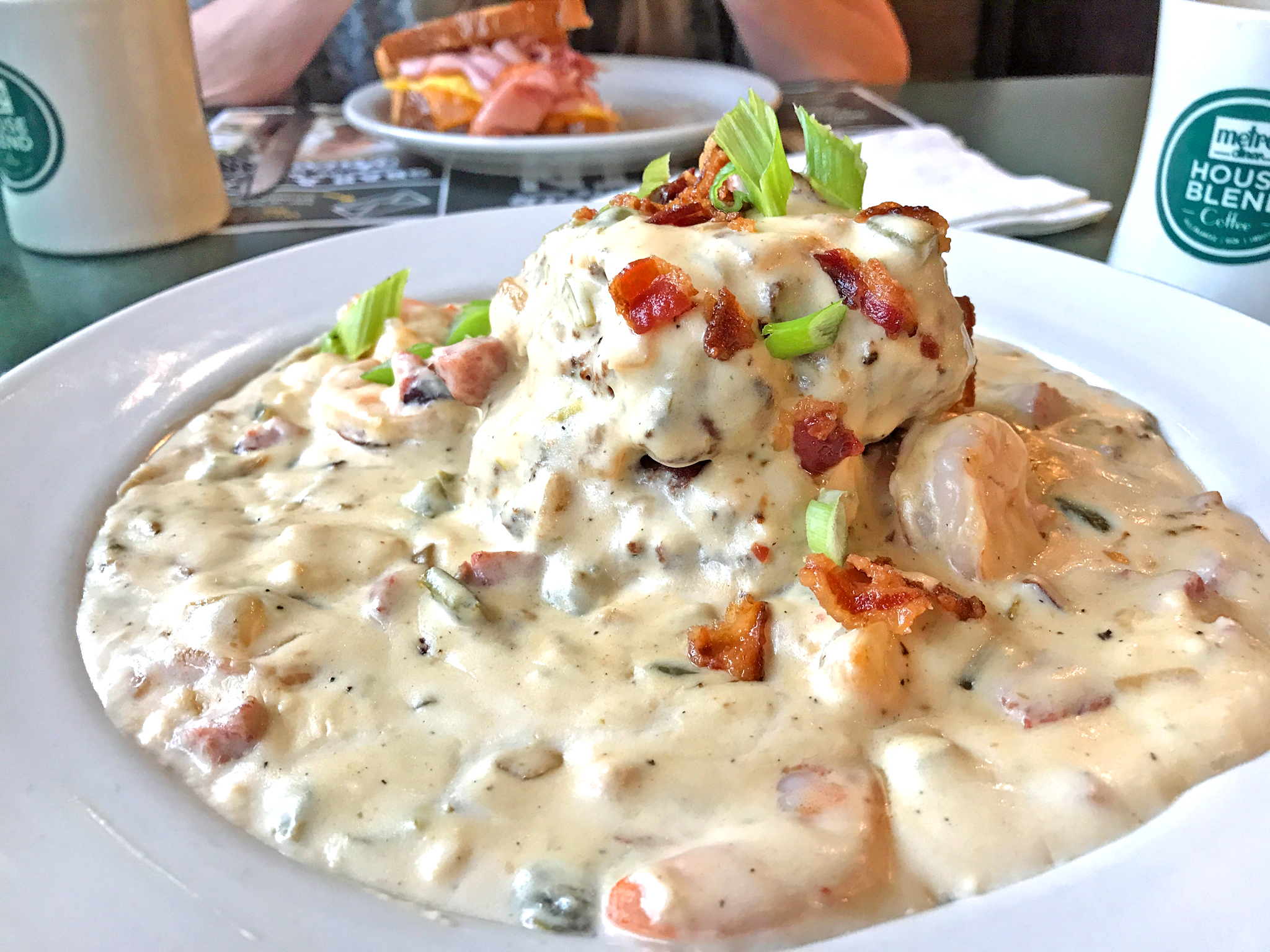 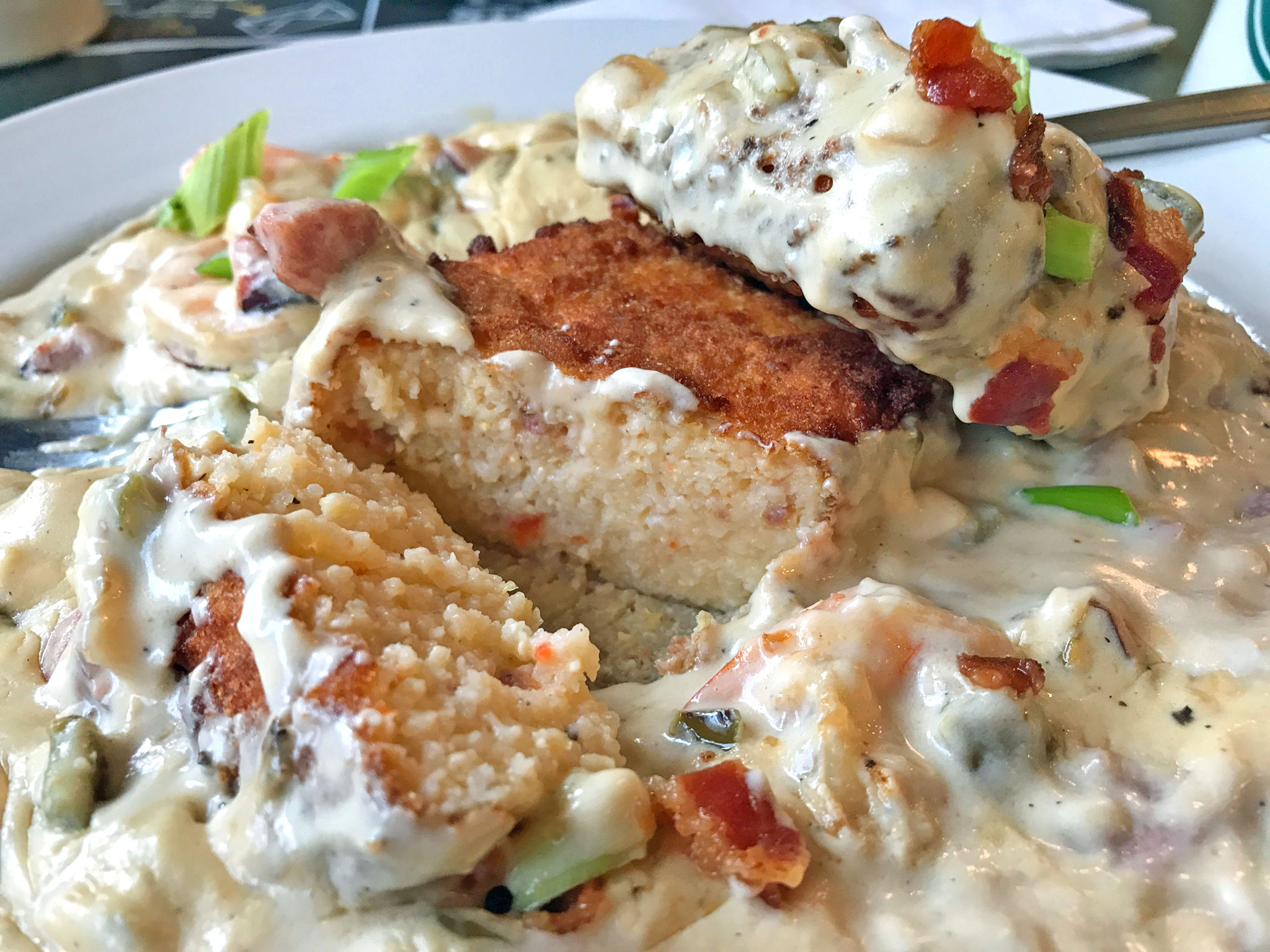 This one is large and in charge! I suggest not trying to finish it. Either share it or take some home for later.

Metro Diner's Charleston Shrimp & Grits is rich, creamy, and crunchy with the fried grit cakes being crispy on the outside and chewy on the inside.

This is on the "Lunch & Dinner Favorites" menu, but you can order from any menu at any time of day, and they open at 7 am seven days a week. 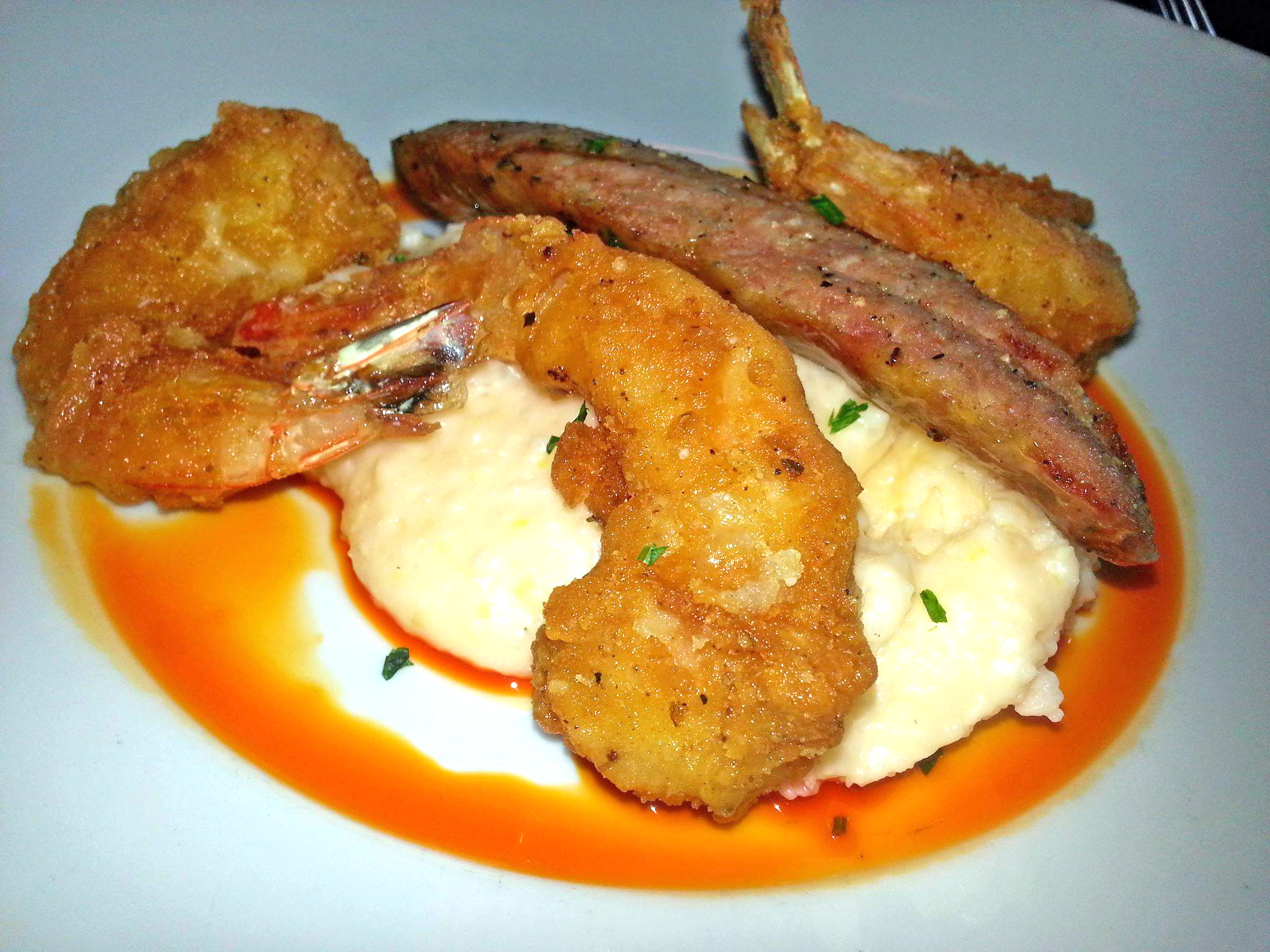 Like Cassis, Parkshore Grill's shrimp & grits has been one of my favorites for nine years. It is available on the brunch menu served from 11am to 3pm on Saturday & 10am to 3pm on Sunday.

Ale Battered Shrimp and Cheese Grits with Andouille Ragout, and Smoked Chili Oil. As you can see the shrimp is battered and fried in this one, but instead of having Andouille slices, there is a big piece of sausage that is split. 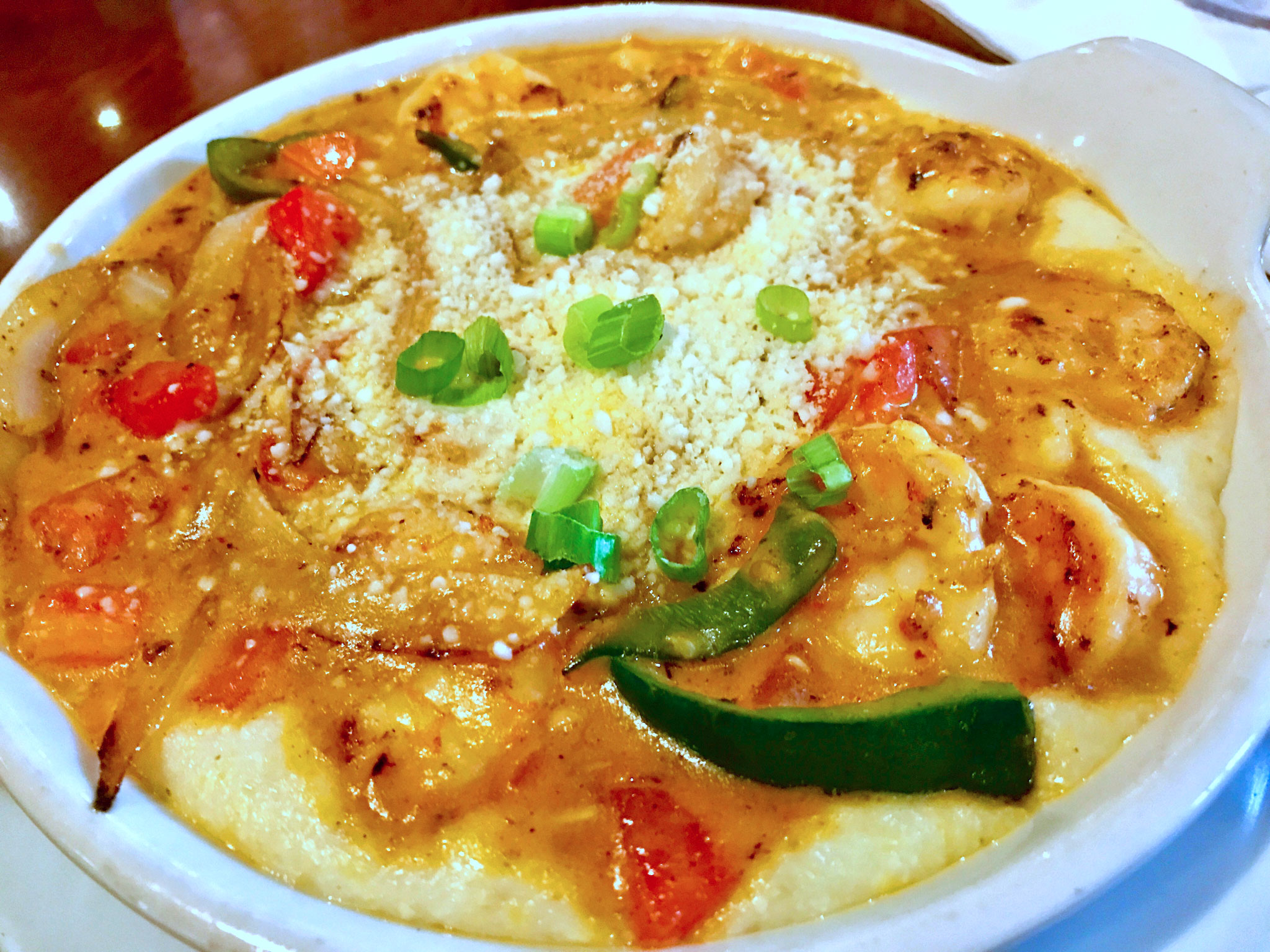 On the menu for over 10 years and served Saturday and Sunday 11:00-3:00. It is a unique, robust, delectable dish that is quite satisfying. 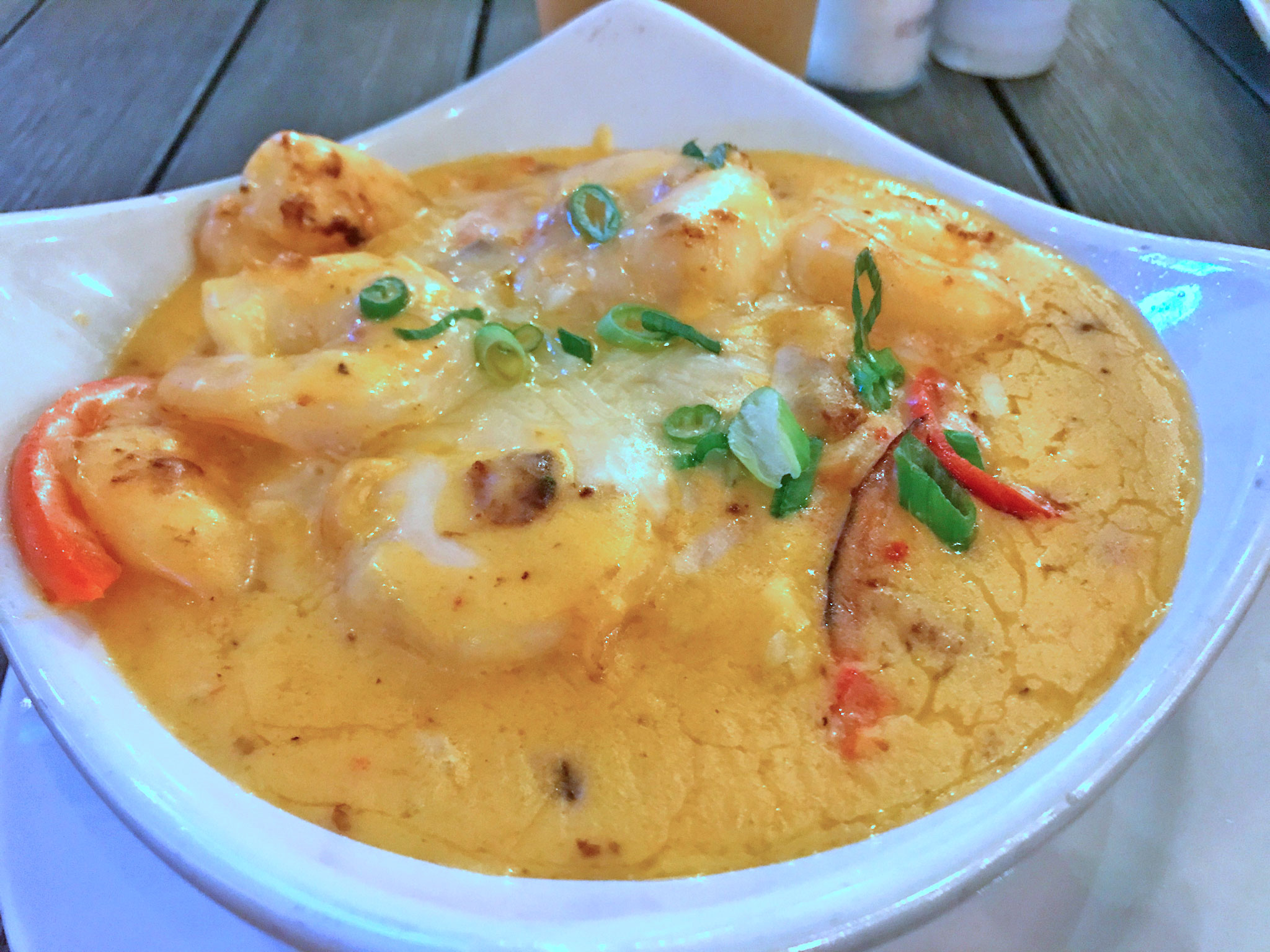 Like most of the dishes on this list, Sea Dog's is hearty and luxurious, but it is also unique. Nobody else has a seafood cream sauce with house smoked pork belly. This pairs fantastically with their brewed on-premise Sea Dog Wild Blueberry Wheat Ale.

You will definitely be full after this. 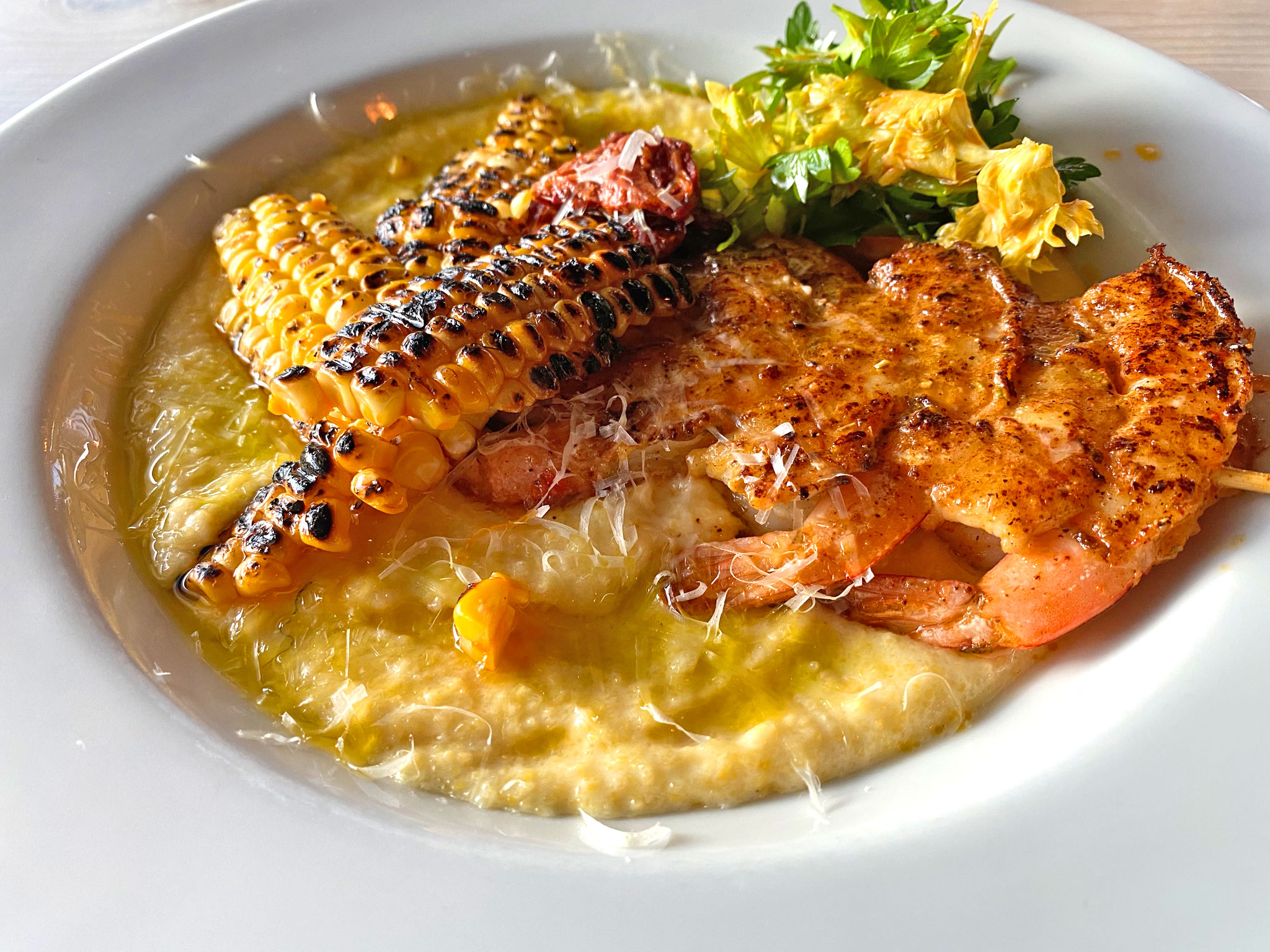 Chef Ruhe is a Master of Masters with his creative, high quality, locally sourced gastronomic feats of genius, and his new invention of shrimp & grits is no exception. It's smoky, salty, sweet, and umami all at the same time. It is so new that it was not on the menu yet, but will be shortly. The grits were somewhat of the finer grind, but they were also creamy, which made up for the fine grind. 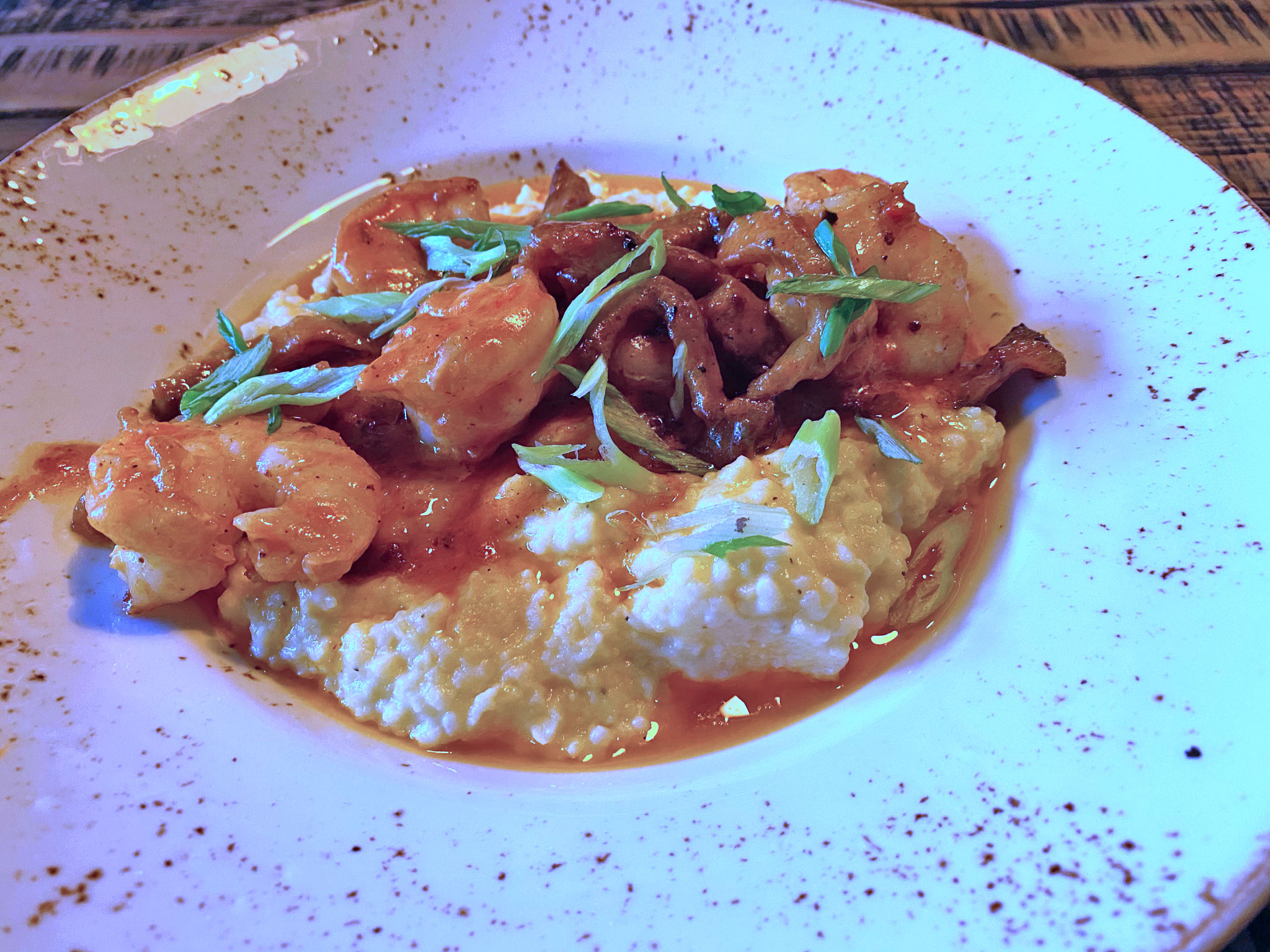 Stillwaters has always had one of my favorite shrimp & grits in St. Pete. They sometimes change them with the season, but they're always delicious. They were on the last list, and since then, they have a new chef (Chef Gary Moran) and a new version, so I made sure to go try them and see if they were still one of the best.

They are still one of my favorites. The grits themselves are perfect. I love that I can keep learning new things as well. It turns out that Tasso Ham Gravy is a thing... and a really good thing. There are tons of recipes for it online, and they all have different unique twists. One had brewed coffee. Another had Old Bay. Google it. It's pretty cool.

Stillwaters makes their smoked Tasso ham in-house, and the overall dish is fantastic. 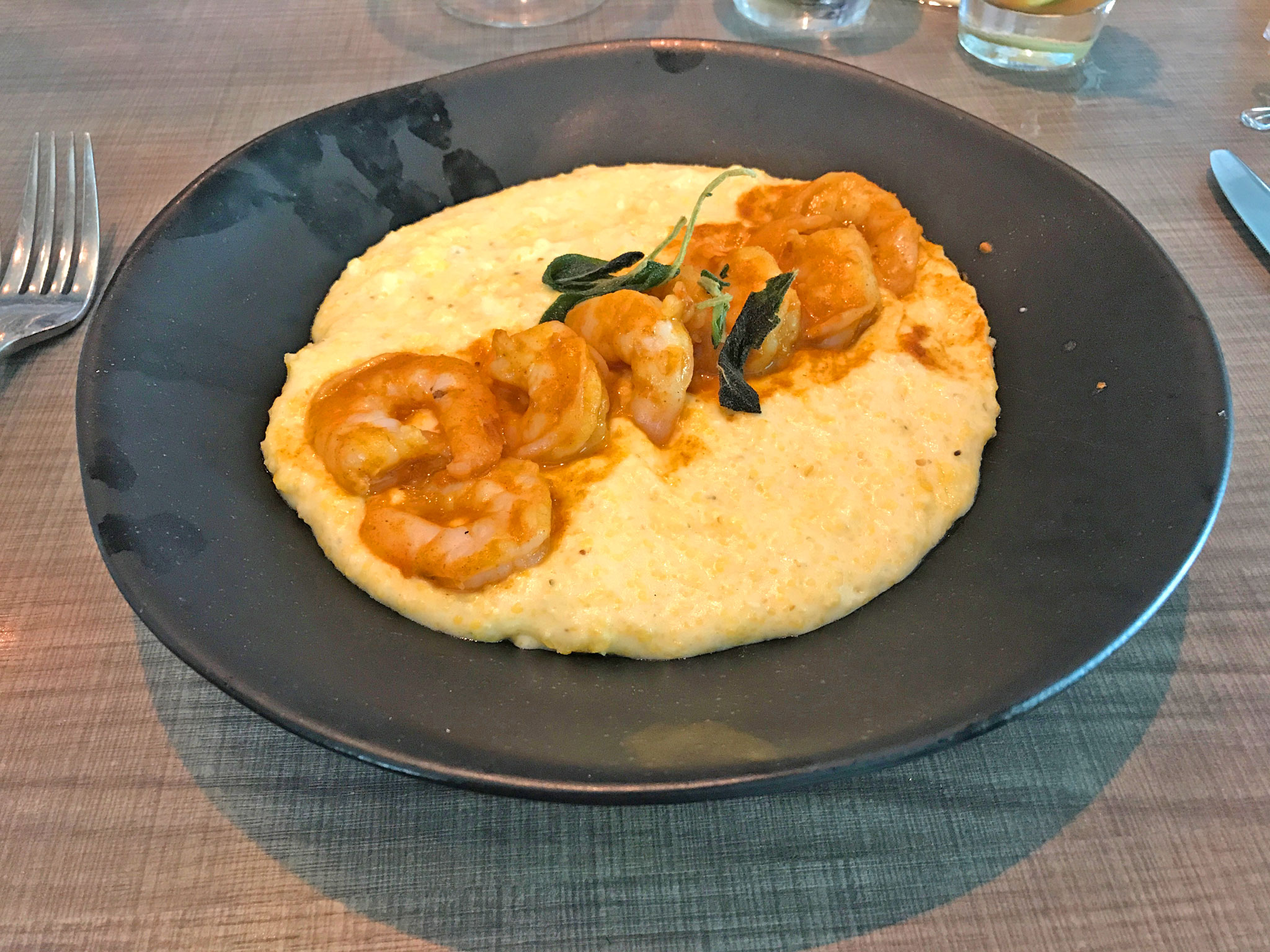 It's Chorizo Spiced Shrimp. I was anticipating some sausage in there, so that was a disappointment. However, the flavors were good, the grits, and shrimp both perfectly cooked. (They should have the servers mention that there's no sausage.) 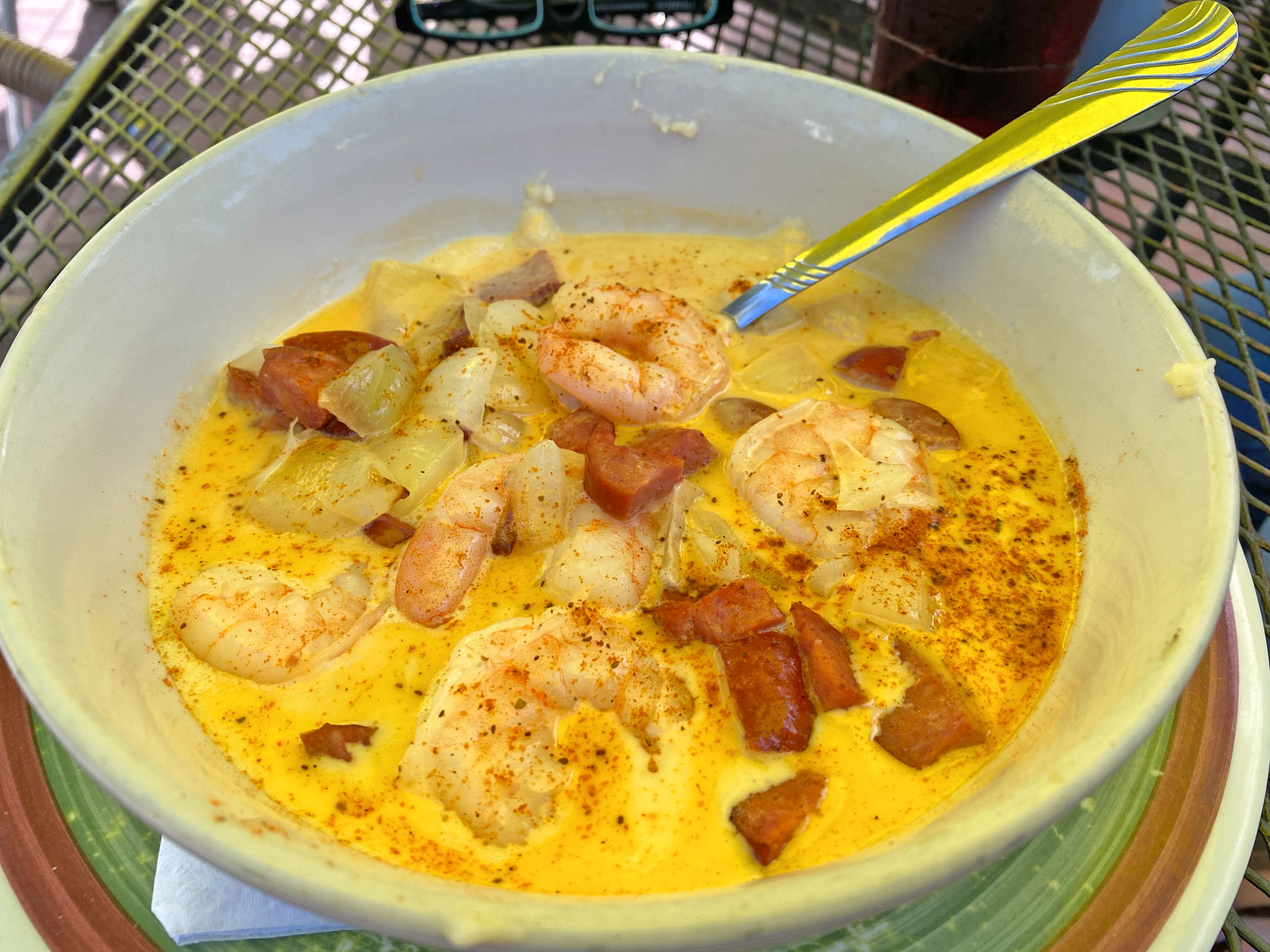 The sherry cream sauce provided great flavor, but it also added wateriness. The grits were the fine-grind, watery type that I do not care for, and I think they forgot to put the cheese in the grits. It tasted great, but if the grits can't stand on their own, (like I said in the beginning), then it doesn't make the list. The sausage had great smoky flavor too.

Chief's Creole on the South Side of St. Pete 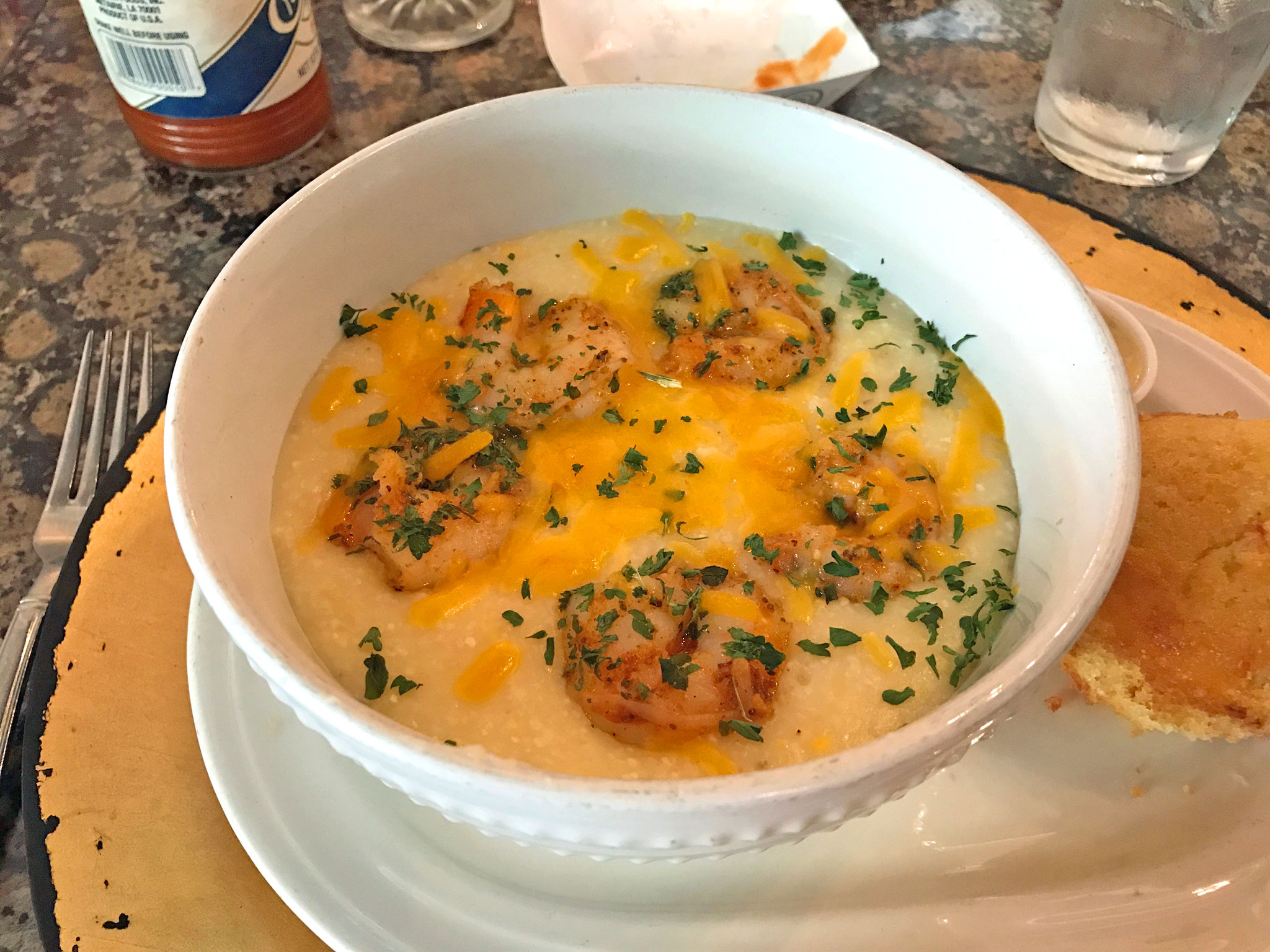 A very straight-forward version that is always recommended over and over again, so here it is. People just love this one. I thought it was quite good myself for when you don't want 25 ingredients in your shrimp & grits. 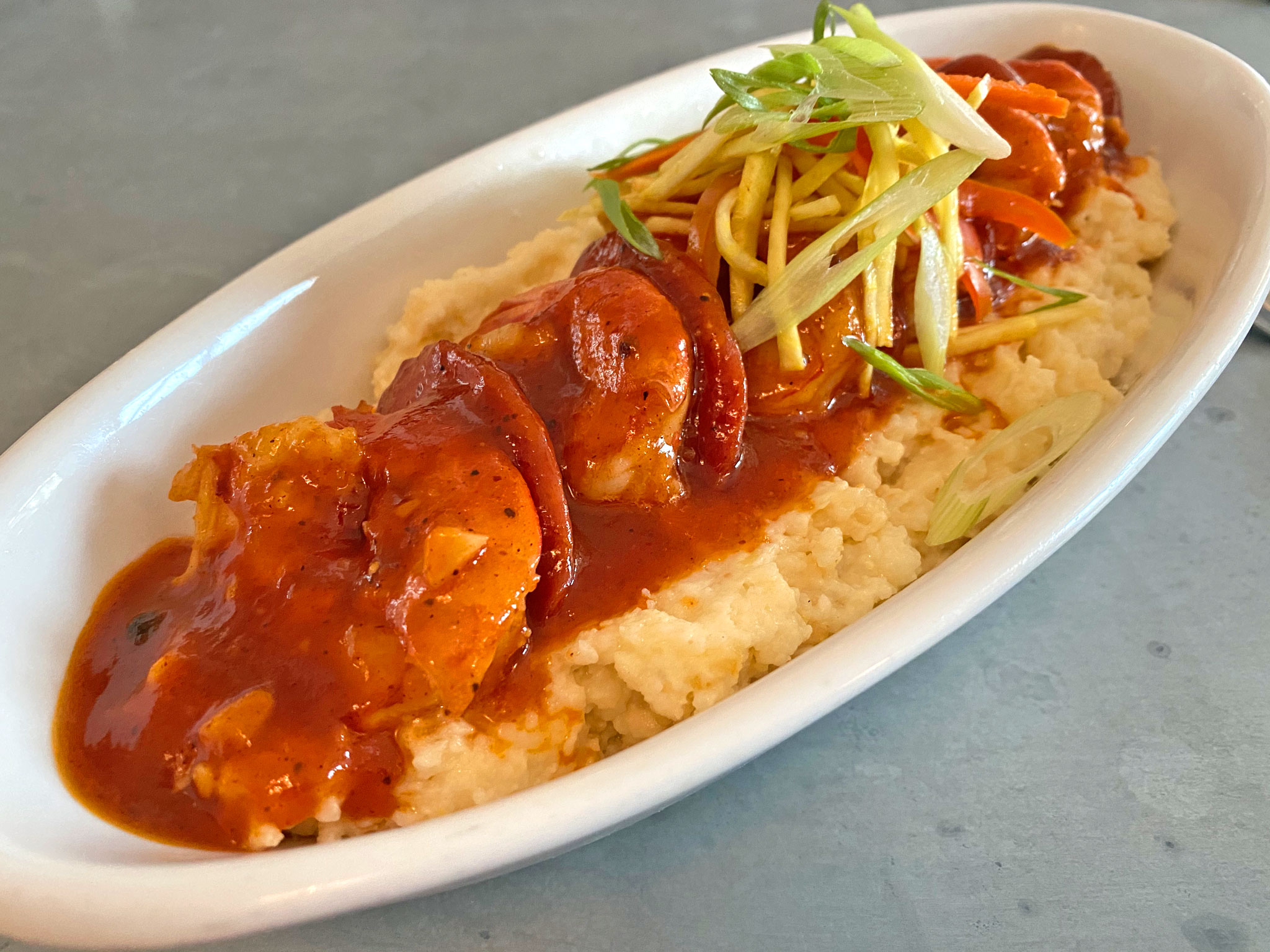 In this case, my personal preference was that I didn't care for the barbecue sauce, and personal or technical, I felt the grits by themselves lacked flavor. I did enjoy that I learned what Chow Chow is, and the bites I took with it were the best.

Shoutout to Myself & Palmetto Farms - some of the best shrimp & grits I ever had, I made myself.

Ten years ago, when I frequently enjoyed grits at several different restaurants in St. Pete, I would experience wonderful grits that were so much better than what I made at home. I was always wondering what their trick was.

Anecdotally, it seems that 99% of the recipes online—even ones titled, "How to Make the Best Grits Ever", use plain water to cook the grits in. Nope. Sorry. You lose.

Some of the restaurants also use cream cheese, and other secret ingredients. There's more than one way to make them amazing. I like the chicken stock and milk trick. An acquaintance of mine uses bone broth. Yum! 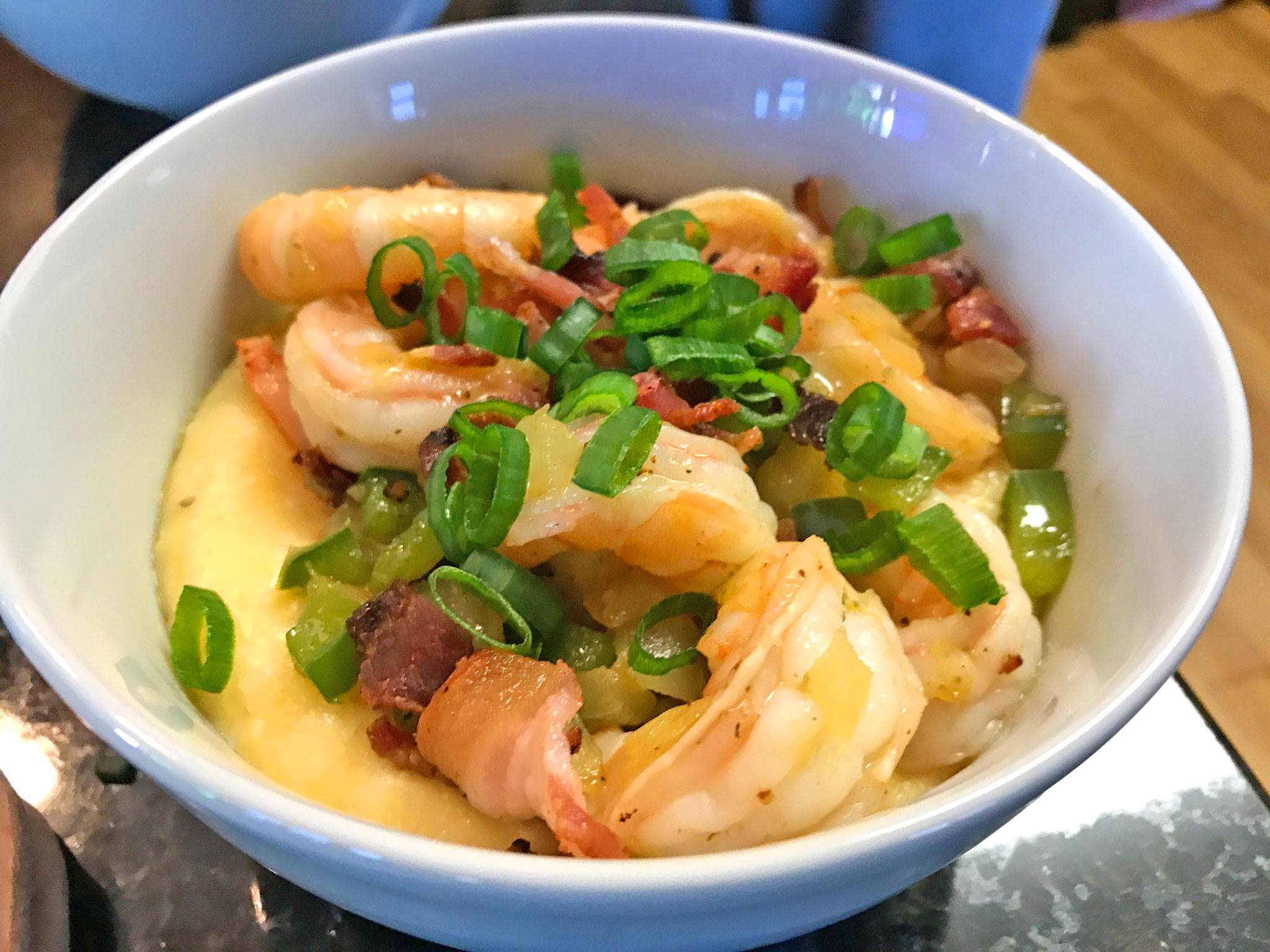 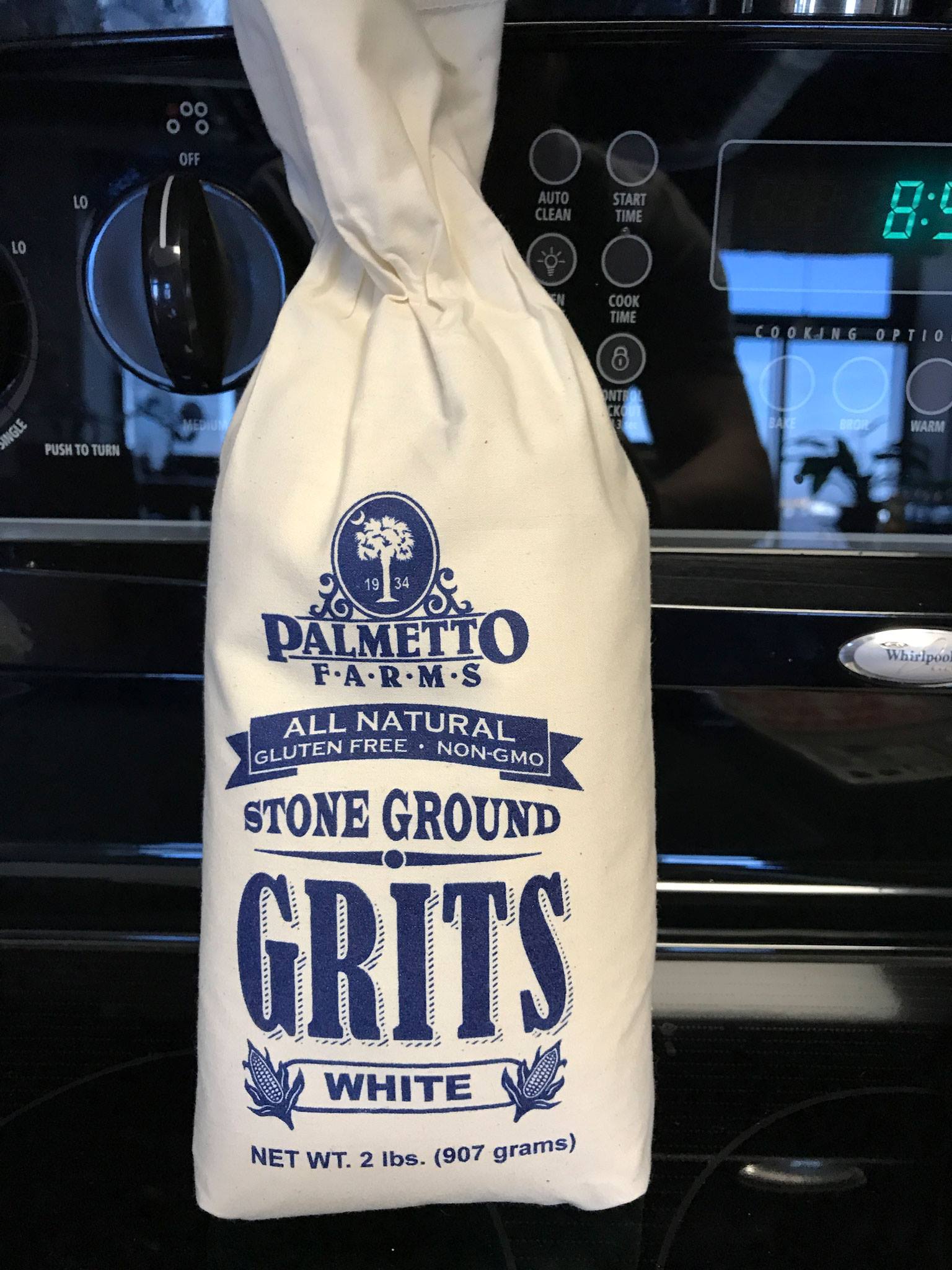 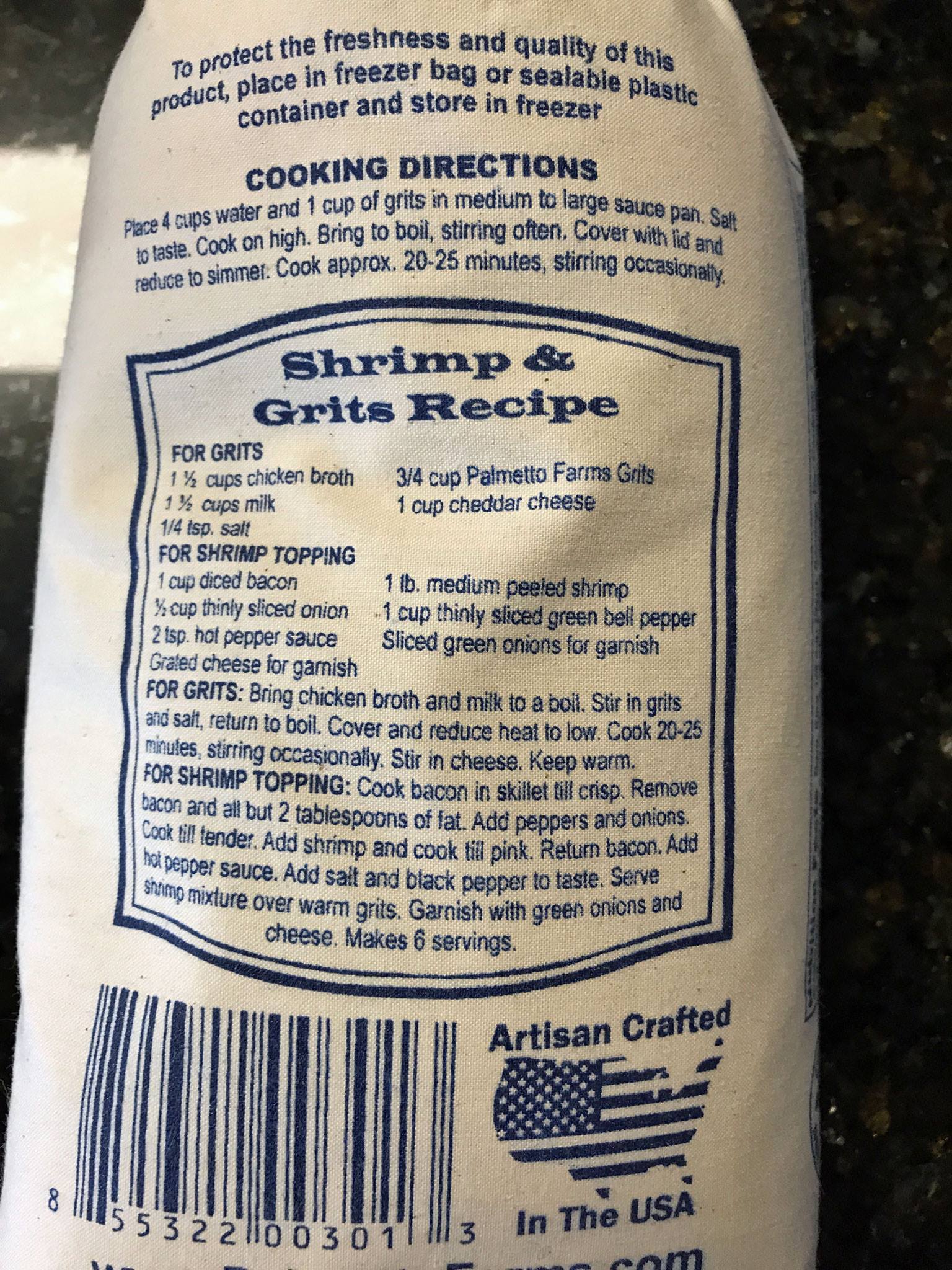 Tell us your favorite shrimp & grits in the comments below!

Here's a list of some of the best shrimp & grits in the St. Pete area done many different ways.