To Donate a Portion of Sales to The Academy Prep Center

Oak & Stone, a New American tavern featuring craft beer, artisanal pizza and gourmet fare, will open its second location in St. Petersburg on Monday, July 9, 2018. The new restaurant is located at 199 Central Avenue in downtown St. Petersburg, next to the Hyatt Place on 2nd Street North.

On opening day, the Lunch menu will be served from 11 a.m. – 4 p.m. followed by a special, invitation-only evening event. Lunch and dinner service during the restaurant’s regular operating hours begins on Tuesday, July 10.

Oak & Stone offers guests the opportunity to craft their own experience each time they visit. The highlight is the region’s largest self-serve beer-only tap wall featuring approximately 50 rotating varieties of American craft beers, with a special emphasis on St. Pete breweries such as 3 Daughters, Cycle and Green Bench, as well as regional breweries. A delicious menu of handmade, wood-fire artisan pizzas, burgers, sandwiches, soups, entrees and salads also tempt diners. Additionally, Oak & Stone offers a full bar with an extensive list of wines and spirits, including bourbon and whiskey tasting flights.

During opening week, July 9 – 14, Oak & Stone will donate a portion of its sales to the Academy Prep Center of St. Petersburg. The nonprofit is a private middle school, serving low-income students and their families. Academy Prep teaches, strengthens and then reinforces the pivotal connection between academics, social skills, careers and life paths. As a community-focused organization, Oak & Stone plans to take part in several other initiatives throughout the year which support area non-profits that benefit children and veterans.

A number of additional celebratory activities round out opening week, including special Tap Takeovers on July 11 – 14 from 6 p.m. – 8 p.m., featuring drink samples and giveaways.

On Saturday, July 14, Clearwater-based Big Storm Brewery will take over the taps as Oak & Stone hosts its first Tampa Bay Rowdies Watch Party. Fans will gather for the away game as the team takes on FC Cincinnati. Kickoff is at 7:30 p.m. Fans who wear Rowdies gear and check in on Oak & Stone’s social media channels with the hashtag #GearForBeer, will win a limited edition pint glass filled with Big Storm’s signature Rowdies craft brew, Kick in the Grass. Earlier this year, Oak & Stone announced an official partnership with the professional soccer team, which will include player appearances, mascot visits, plus pre-game and post-game promotional opportunities.

The highlight of Oak & Stone is its self-serve beer tap wall. To pour each tap, guests 21 and over use a RFID-enabled wristband to engage the brew tap desired. Technology in the wristband links to software that starts the guest’s tab based on how many ounces are poured during the visit and automatically stops after a total of 40 ounces. Guests can then “re-load” their bracelets with more ounces.

During each visit, guests can taste and try different beers, providing an exceptional and unintimidating tasting experience for craft beer aficionados and novices alike. Oak & Stone’s “beertenders” are on hand to guide guests through the beer selection process and help make tasting recommendations. Guests also receive a print out of the beers they selected on their receipt.

Craft beer isn’t the only attraction at Oak & Stone. Gourmands will not be disappointed. The restaurant sources only the freshest ingredients combined with time-honored traditions. Pizza dough is made fresh from a recipe of spring wheat flour, sea salt, extra virgin olive oil and water that has been triple filtered for exceptional taste and the perfect amount of rise. Baking in wood-fired ovens results in Oak & Stone’s signature crisp crust, chewy center and unmistakable flavor. Toppings will include classic pizza options such as Margherita, Pepperoni or Sausage and Meatball. More imaginative signature options include:

Guests will also have the option to build their own pie with an extensive selection of toppings and sauces.

Oak Bowls, burgers, sandwiches, entrees, and street tacos round out the chef-inspired menu. Starters such as Pretzel Crusted Tuna Sashimi, Philly Cheesesteak Eggrolls and Oak & Stone’s signature Wood-Oven Wings, which are marinated overnight in a secret brine then roasted in the wood-fire oven, are meant to be shared. Oak Bowls include a base of either sesame kale or quinoa pilaf, topped with Tuna Poke, Buffalo Chicken or Vegetables.

Building on the success of the original Oak & Stone, which opened in Sarasota in 2016, business partners Joe Seidensticker and Brett Decklever set out to create a restaurant that offers guests a warm and welcoming environment. Oak & Stone has a laid back and casual atmosphere –  perfect for an evening out with friends, date night or family dinner.

“Joe and I wanted to create a space where people can have fun with their family and their friends,” notes Brett Decklever. “It’s a great environment for people of all ages.”

“We are so excited to share Oak & Stone with St. Petersburg,” added Seidensticker. “We think the city will embrace what we have to offer and we can’t wait to be a part of the community.”

Oak & Stone will have room for 300 diners between the 6,000-square-foot restaurant and an expansive 3,000-square-foot outdoor deck outfitted with tables and chairs for dining, as well as couches and fire-pits for a more casual vibe. Large screen televisions throughout the space will entertain diners with sporting events. On weekend evenings and during special events, the restaurant will host local DJs. 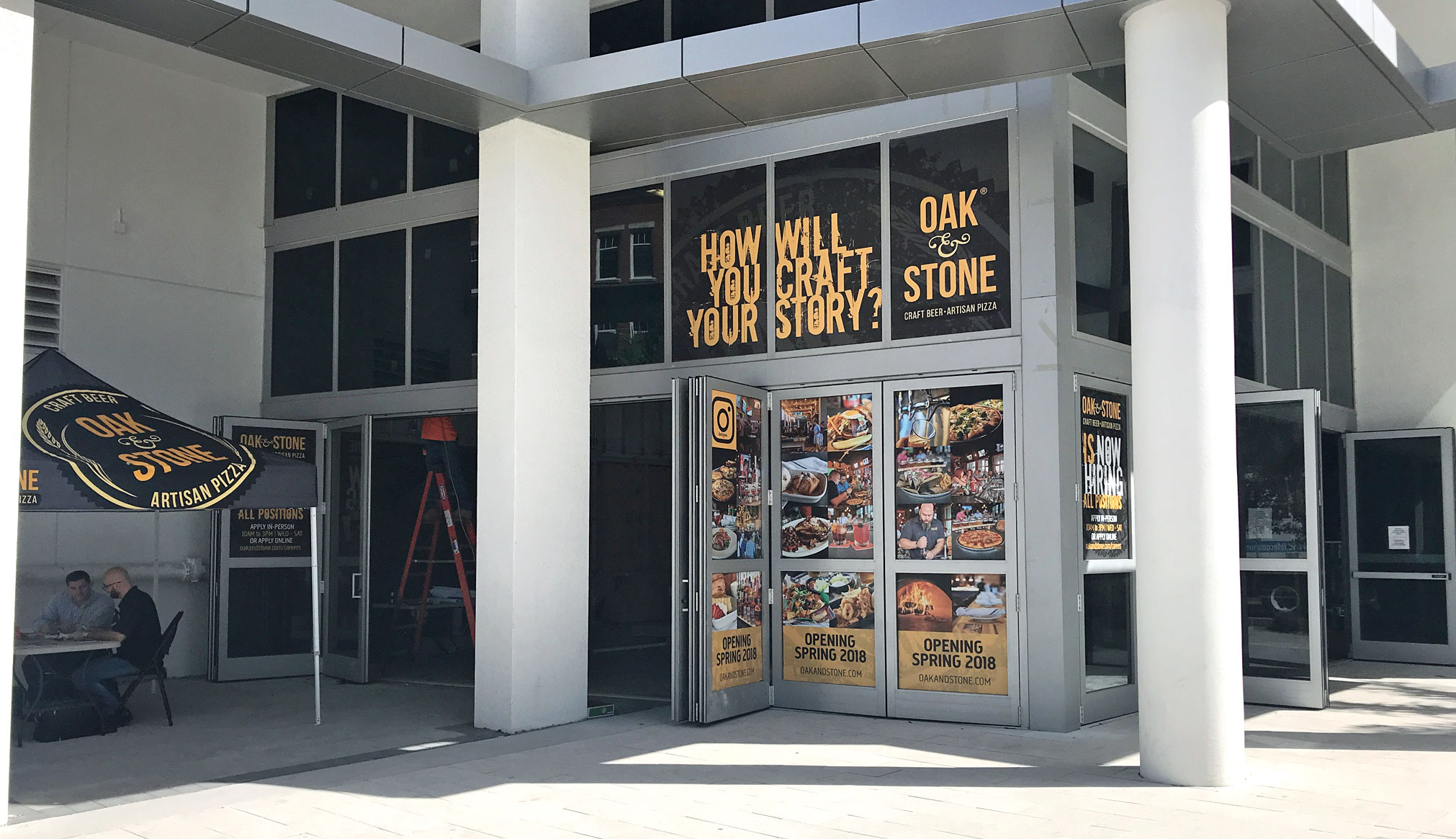 Oak & Stone is a New American tavern featuring craft beer, artisanal pizza and gourmet fare using only the freshest ingredients. Guests Craft Their Own Experience by pouring from the region’s largest self-serve beer-only wall, offering a selection of more than 50 rotating beers with an emphasis on American craft beers, as well as favorite hometown breweries. An extensive list of wine, whiskey, bourbon and craft cocktails are also available. Founded in Sarasota, Florida in 2016, Oak & Stone provides a laid-back, casual atmosphere to enjoy great food and drink with the people who matter most.