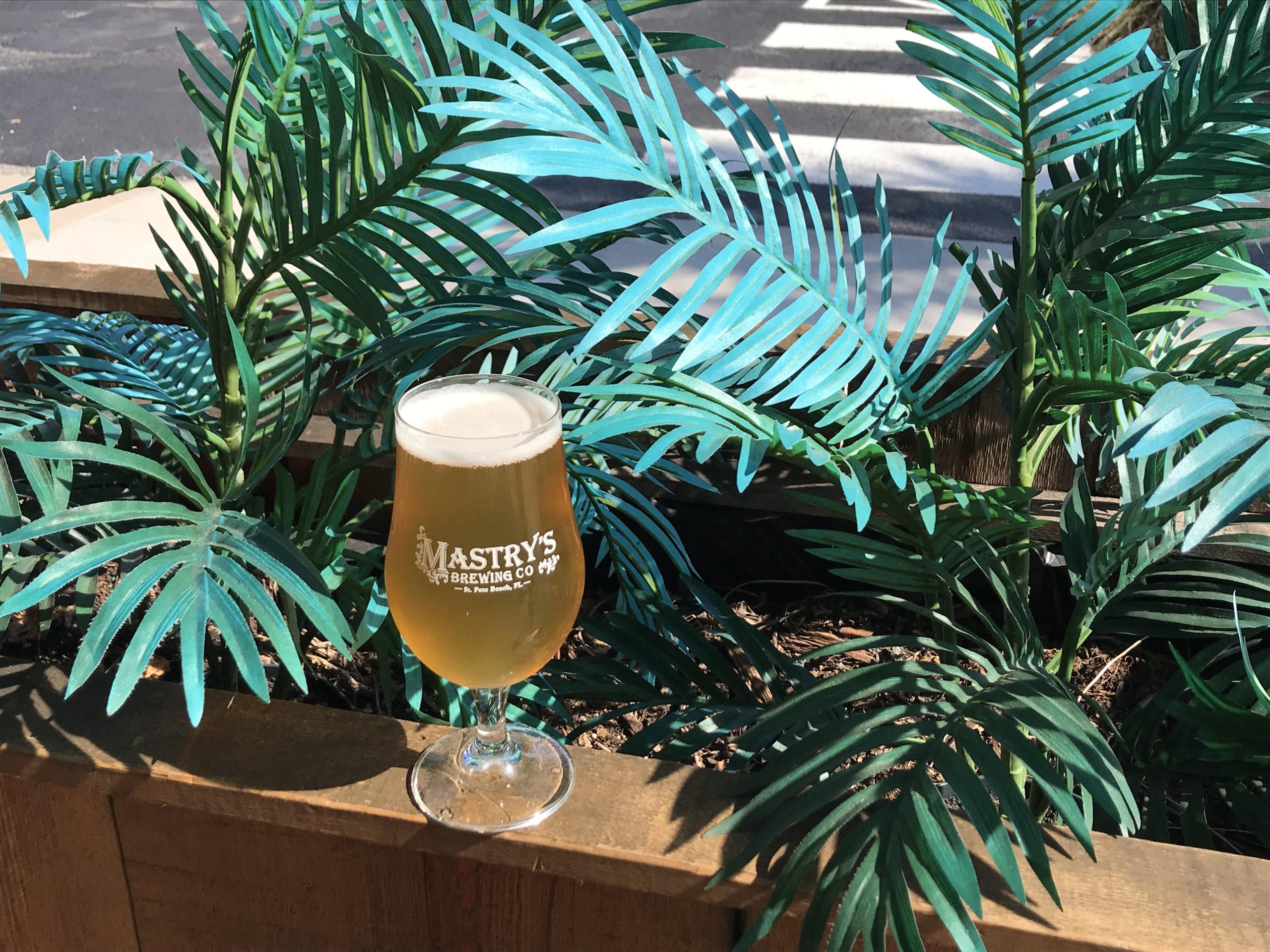 It’s no secret that the craft beer scene is booming exponentially throughout downtown St Petersburg and the surrounding areas. But, did you know that there’s a hidden brewing gem with a booming presence on the beach? That’s right, Mastry’s brewing has been crafting beers on St. Pete Beach since 2016. 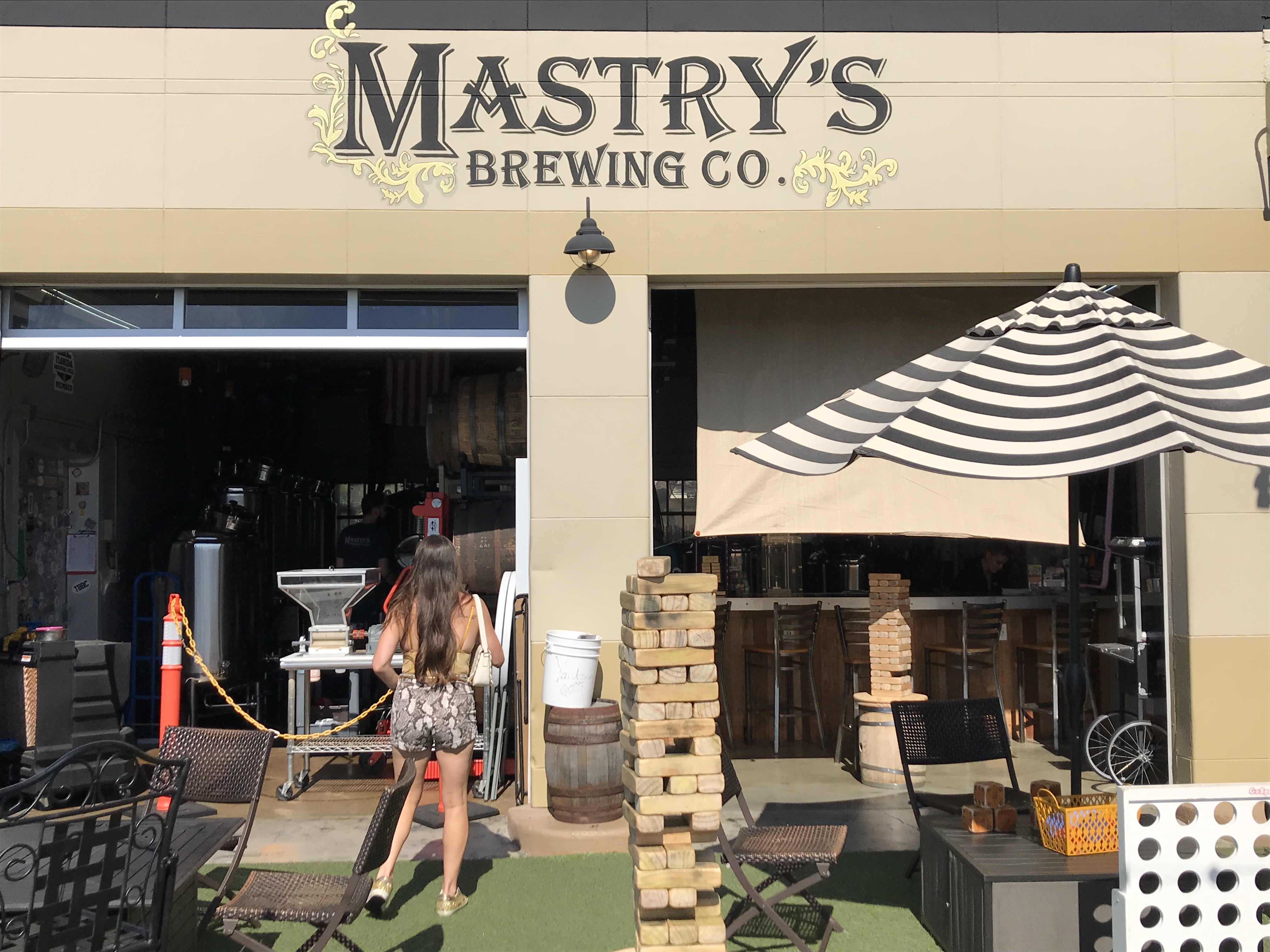 While, yes, Mastry’s opened their doors on the beach in 2016; however, Matthew and Danie Dahm, founders of Mastry’s, began operations in 2014. Initially, Mastry’s acted as a brew-pub out of a family-owned restaurant, CD Romas, in the Tyrone area, until the current building that the brewery occupies on the beach became available. The facility once was an auto repair shop that Matthew actually obtained a liking for as a child. When the location was advertised online, Matthew immediately acted on the opportunity and turned Mastry’s into the appealing watering hole that it is today.

Current Head Brewer, Michel McLevey, began brewing operations with Mastry’s in 2015 while they were at CD Romas. He and Matthew worked diligently together, day in and day out. Matthew expressed his vision to grow Mastry’s with Michel, and suggested that he make the leap to the next step- attending USFSP for Brewing Arts. As soon as Michel graduated, Matthew appointed Michel as the head brewer of Mastry’s. Additionally, Michel also earned prestigious recognition as a Certified Cicerone. (“sis-uh-rohn” – It’s like a Sommelier, but for beer.) 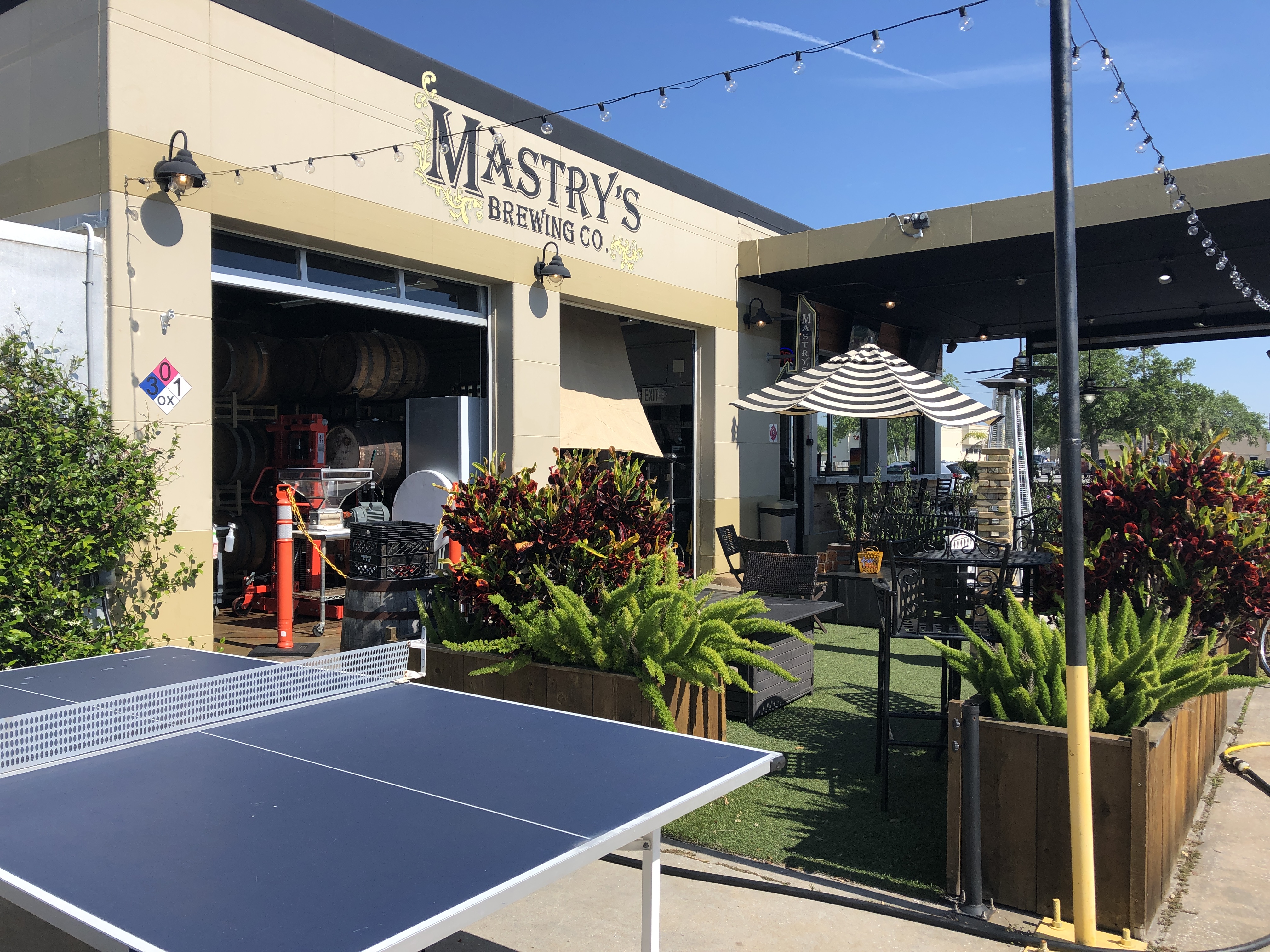 How did Matthew and Danie arrive on a name like “Mastry’s” for their brewery? Well, Matthew is actually a third generation Mastry and the breweries name pays homage to the family’s rich history. The Mastry family is quite large and has had their roots planted in St Petersburg since the nineteenth century. Matthew and Danie have both drawn inspiration from their families, namely, their parents, who built and established their own businesses from the ground, up.

Believe it, or not, brewing is a secondary career for Matthew. He’s actually an engineer and was influenced by and attracted to the booming craft beer scene to begin home-brewing. He and Danie were both avid craft-beer fans and the endeavor felt right. On weekends while Danie was working on her doctorate, Matthew would brew. Shortly after his brewing took off is when he had his light bulb moment to fully pursue a brewery of his own. 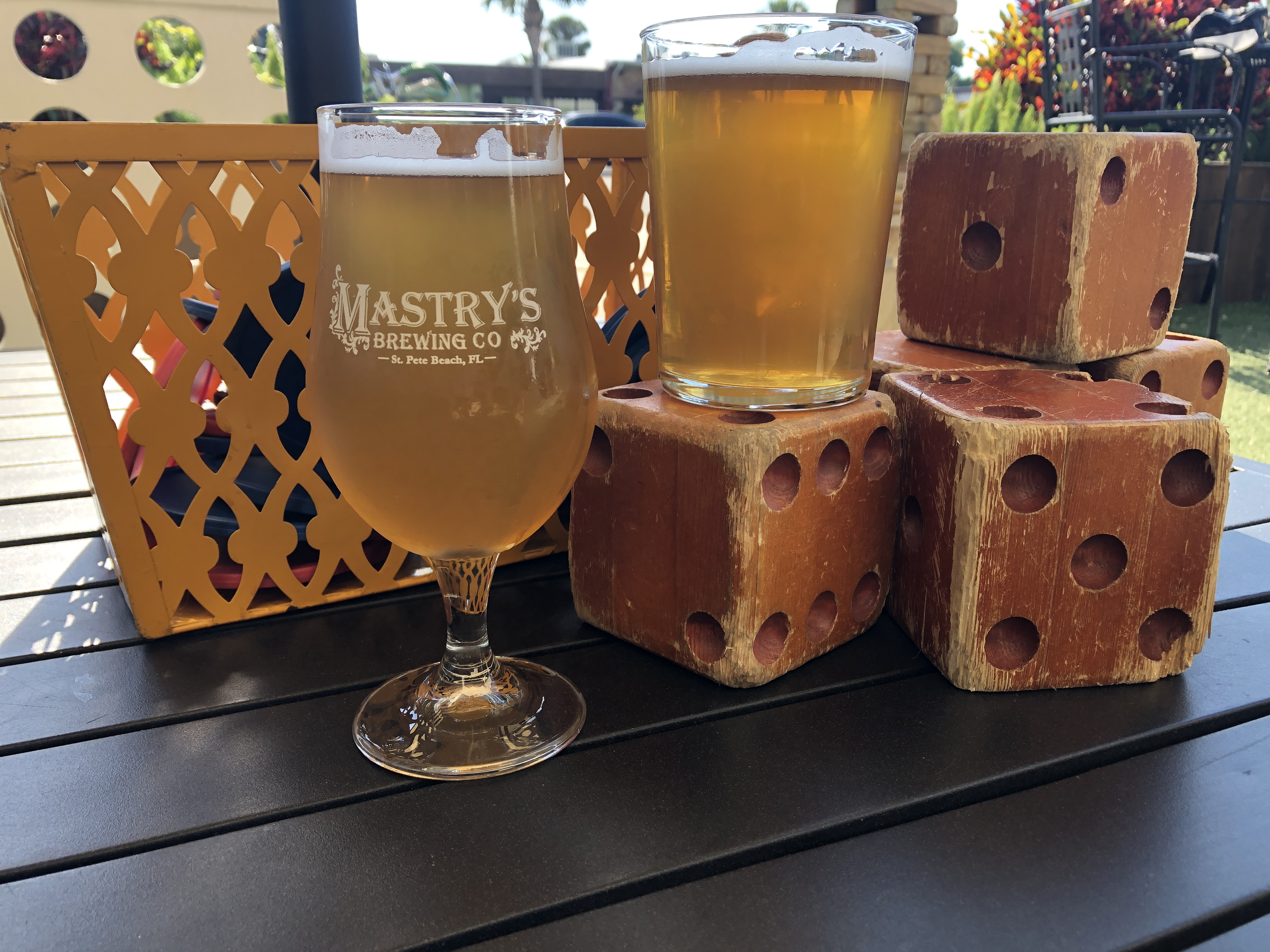 If you can’t find a beer at Mastry’s that suits your palate, beer is simply not for you. Their ever-changing and expansive menu has something for everyone- from light and subtle blondes, to deep and dark stouts. Mastry’s does have a handful of flagship beers that you’re likely to find on draft more times, than not, because Matthew said that those are the beers that they seem to brew the most. Those beers include: Boca Ciega Bay IPA, Blind Pass Brown, Breezy, JMC, Deans Stout and their Hefeweizen. 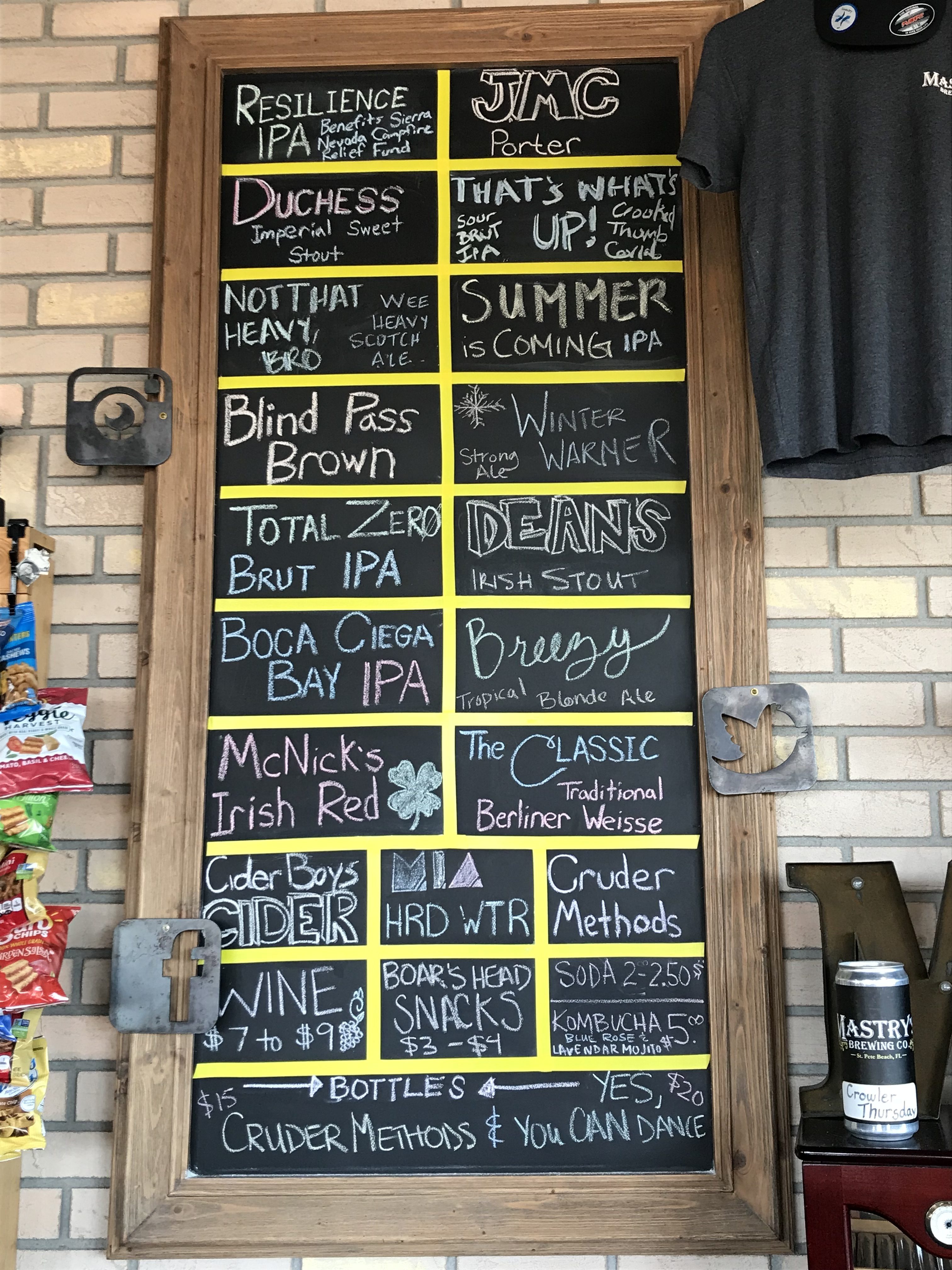 Not only is Mastry’s pumping out some phenomenal beers, but they also have an equally as fantastic atmosphere and setting to enjoy said beers at. Mastry’s was the first brewery to establish itself on the beach and is still the only brewery on St Pete Beach. Their modernized space is open-air, with seating both indoors and out. Artificial turf adorns a partial area of the space outdoors and holds plenty of seating, as well a handful of life-size games to keep you and your group occupied whilst enjoying a few pints. 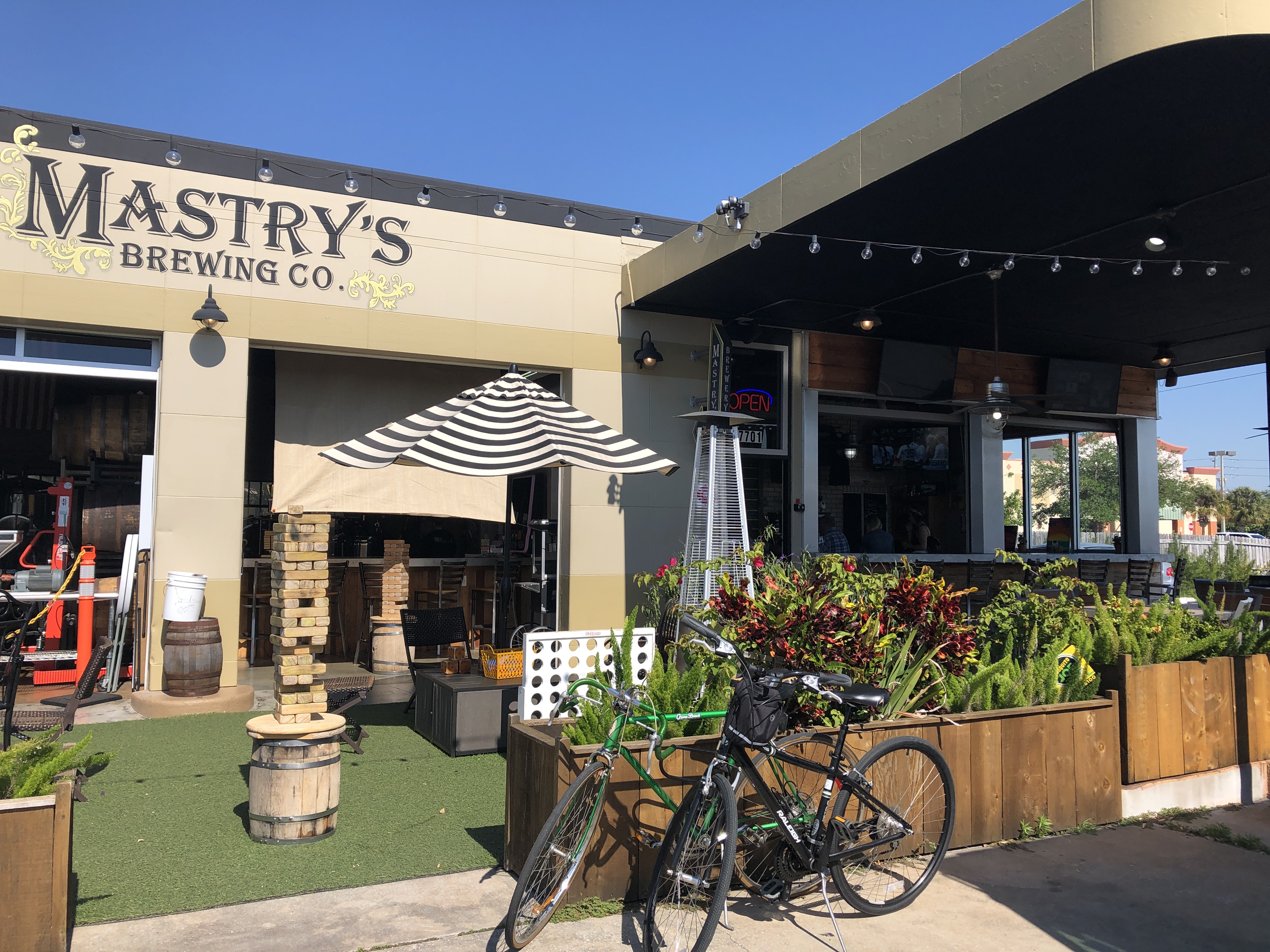 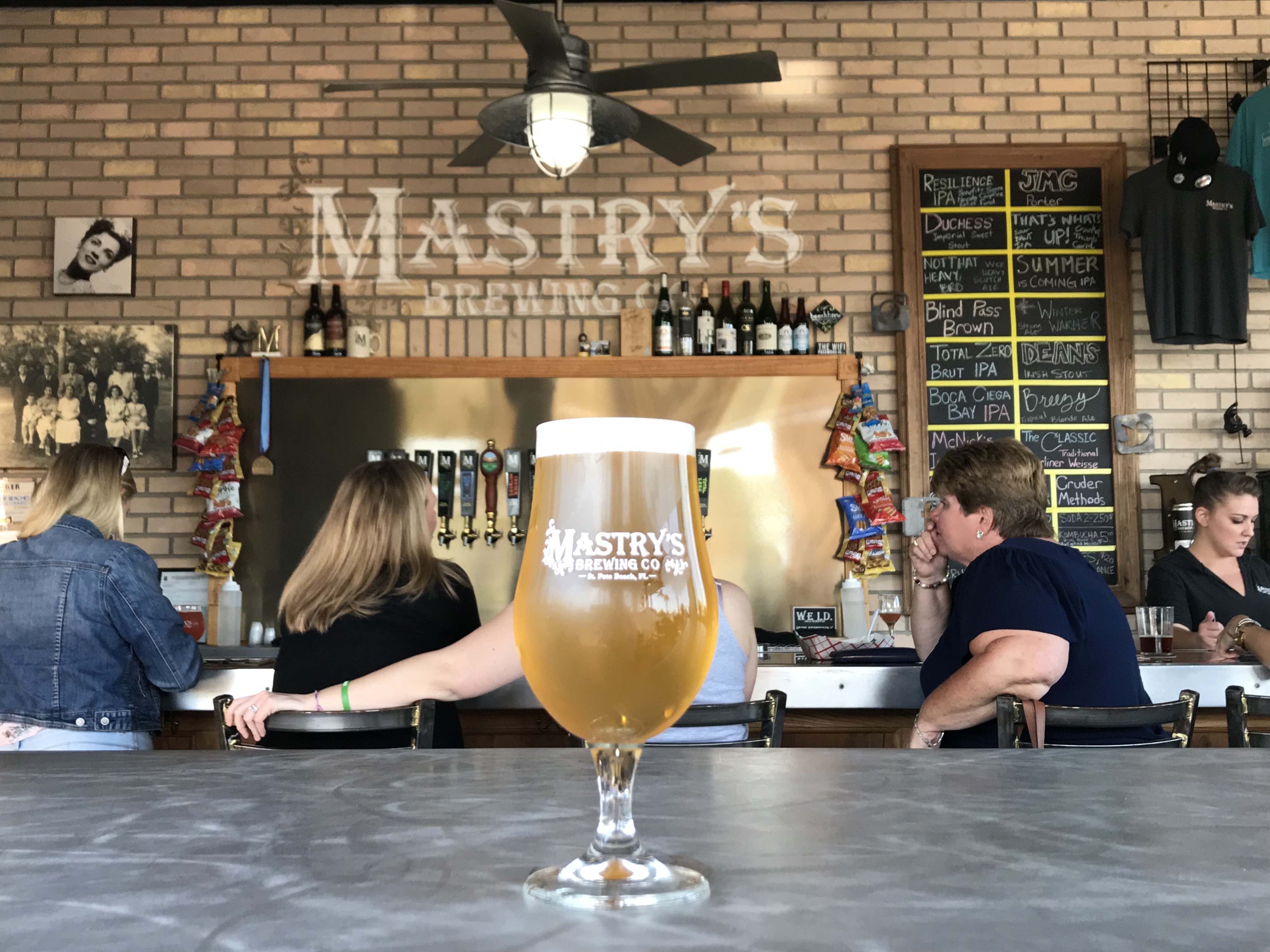 Looking to pick up some of Mastry’s beers to enjoy in the comfort of your own home? Well, you’re in luck. Currently, they have a few of their most popular brews in distribution. Those beers include: Boca Ciega Bay IPA, Breezy and Blind Pass Brown (I’ve had Breezy and Blind Pass and can personally vouch that both are delicious and well worth your pennies). 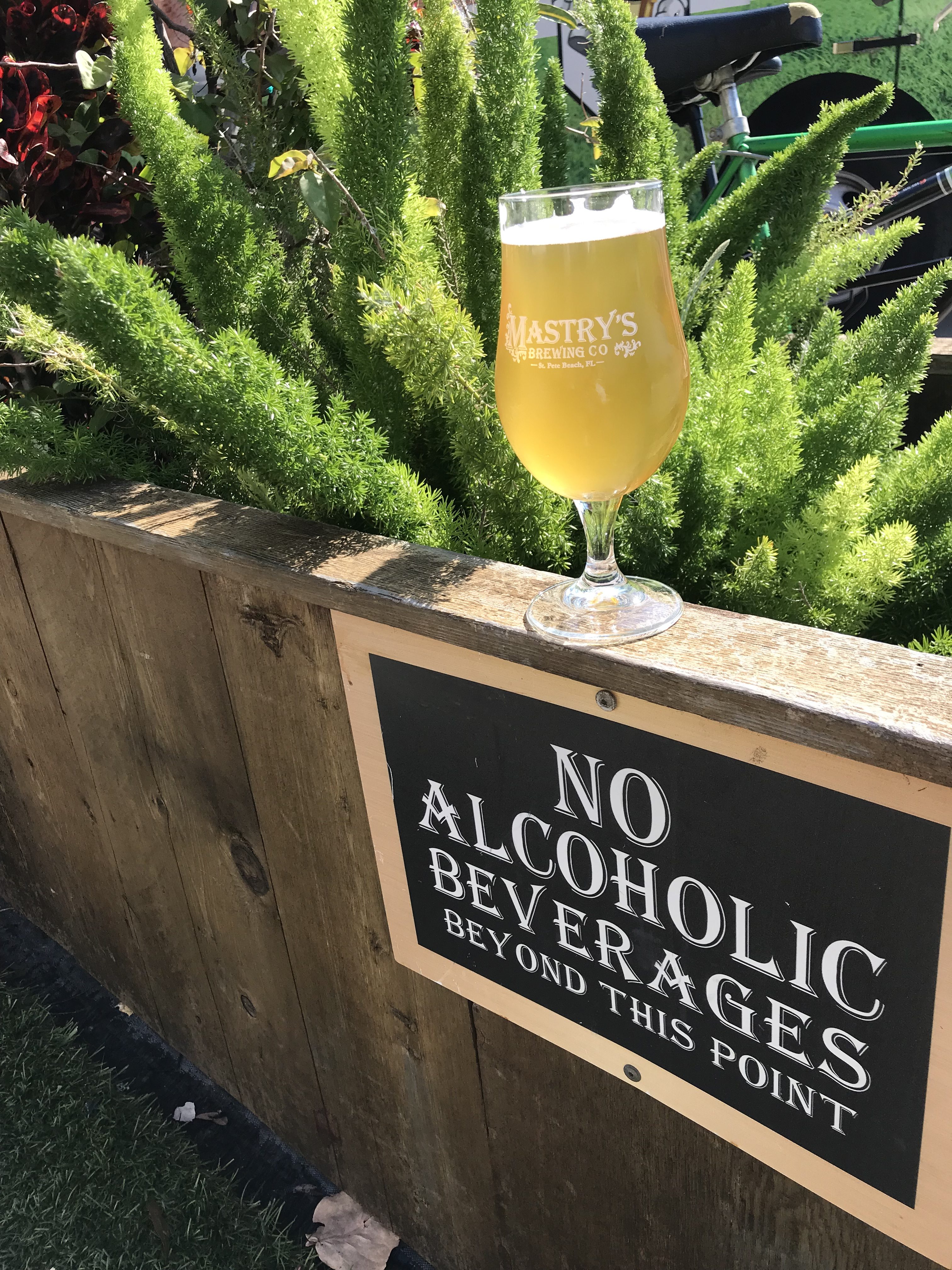 There are a number of aspects that set Mastry’s apart from other breweries, aside from their location on the beach. They consciously maintain a balance of old world, consistent, clean beers and conversely also brew mixed-culture and Brett-driven beers- kettle soured ales, lagers and hazy IPAs, they ferment a wide array of beers with Norwegian Kveik. They brew to seasons and invest time and effort into constant development and innovation. 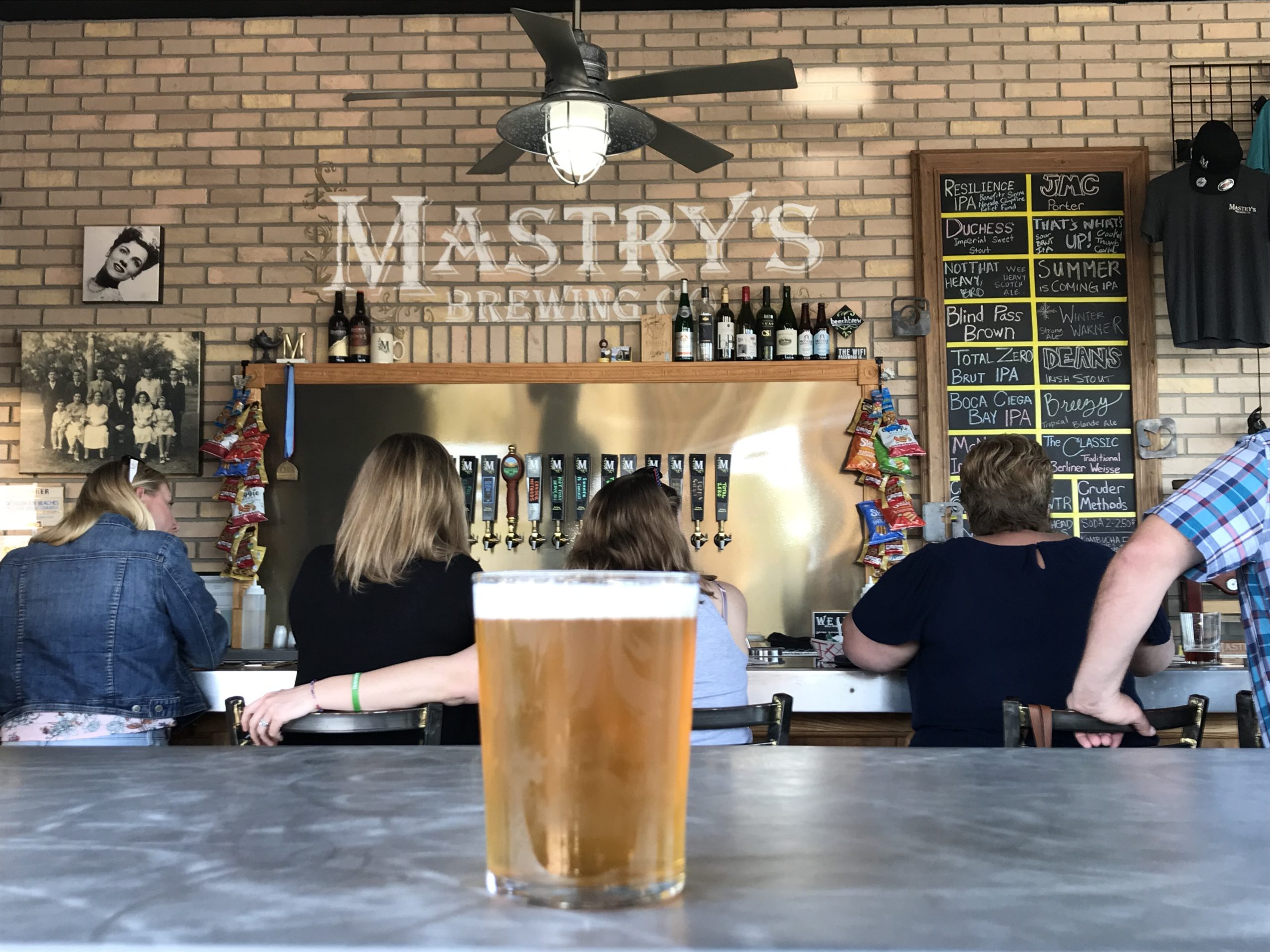 Total Zero is a Brut IPA that is available year-round in the taproom.

Nose: Hints of a combination of
honey, nuts and floral aromas.

Overall: An easy-drinking Brut
IPA that is ideal and easy to drink in multiples. Perfect on a sunny
pool day, or lazy afternoon of day drinking on the porch.

Food Pairing: Total Zero’s
crispness makes it an ideal beer to grab with a classic Cuban
sandwich. It keeps your palate refreshed, while the hops make for an
exciting counterpart to the mojo pork, mustard and briny dill pickles. 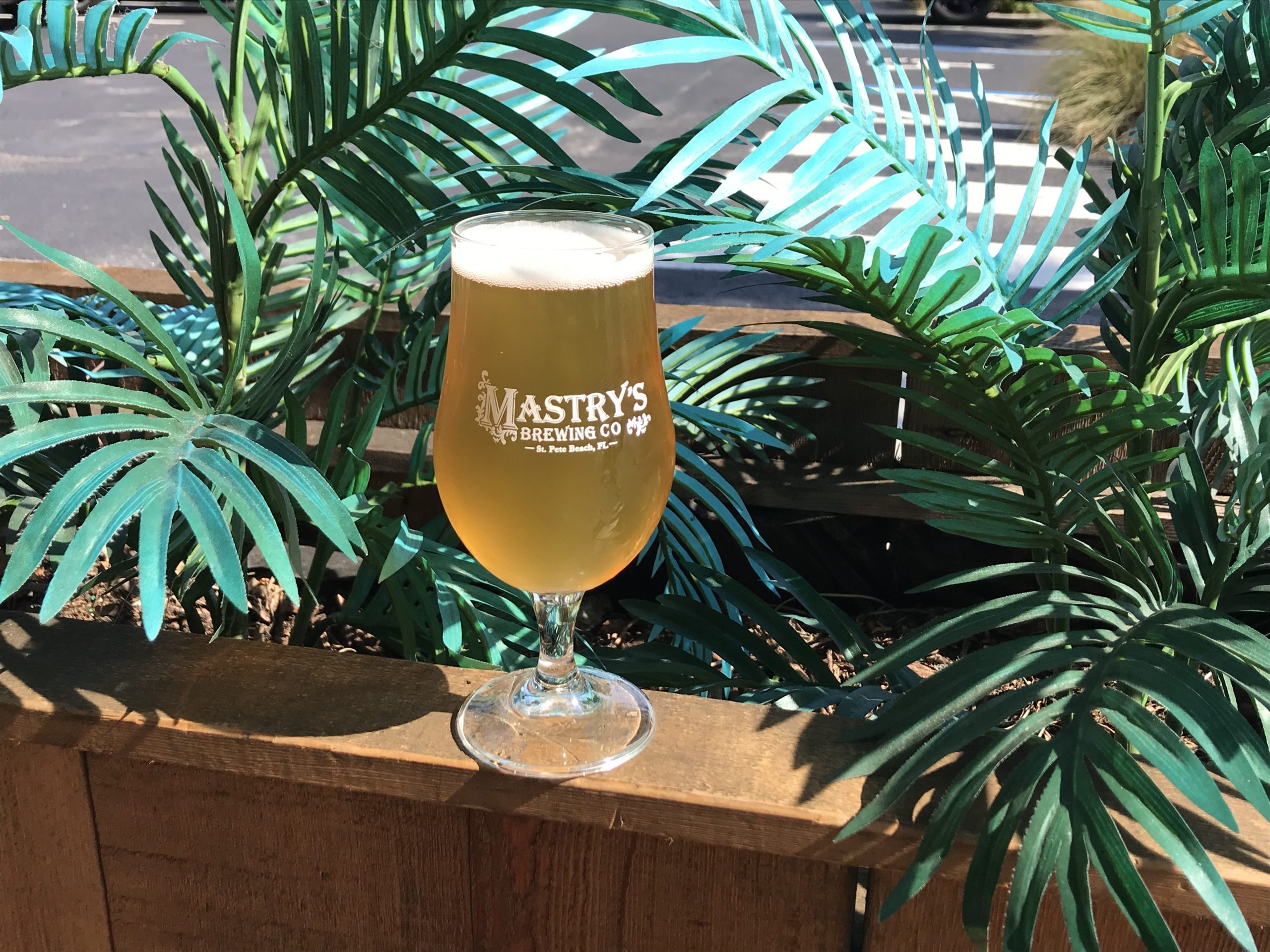 Breezy Tropical Blonde Ale sounds as good as it tastes. This brew is
one of Mastry’s flagships and is also in distribution.

Overall: A bold blond ale that
is bursting with flavor. It undoubtedly flirts on the line between a
blonde and pale ale.

Food Pairing: Breezy is the
ideal companion with Thai cuisine. Something about Pad Se Ew with its
sweet, savory and sour noodles really highlight the subtle hop
character in this beer. 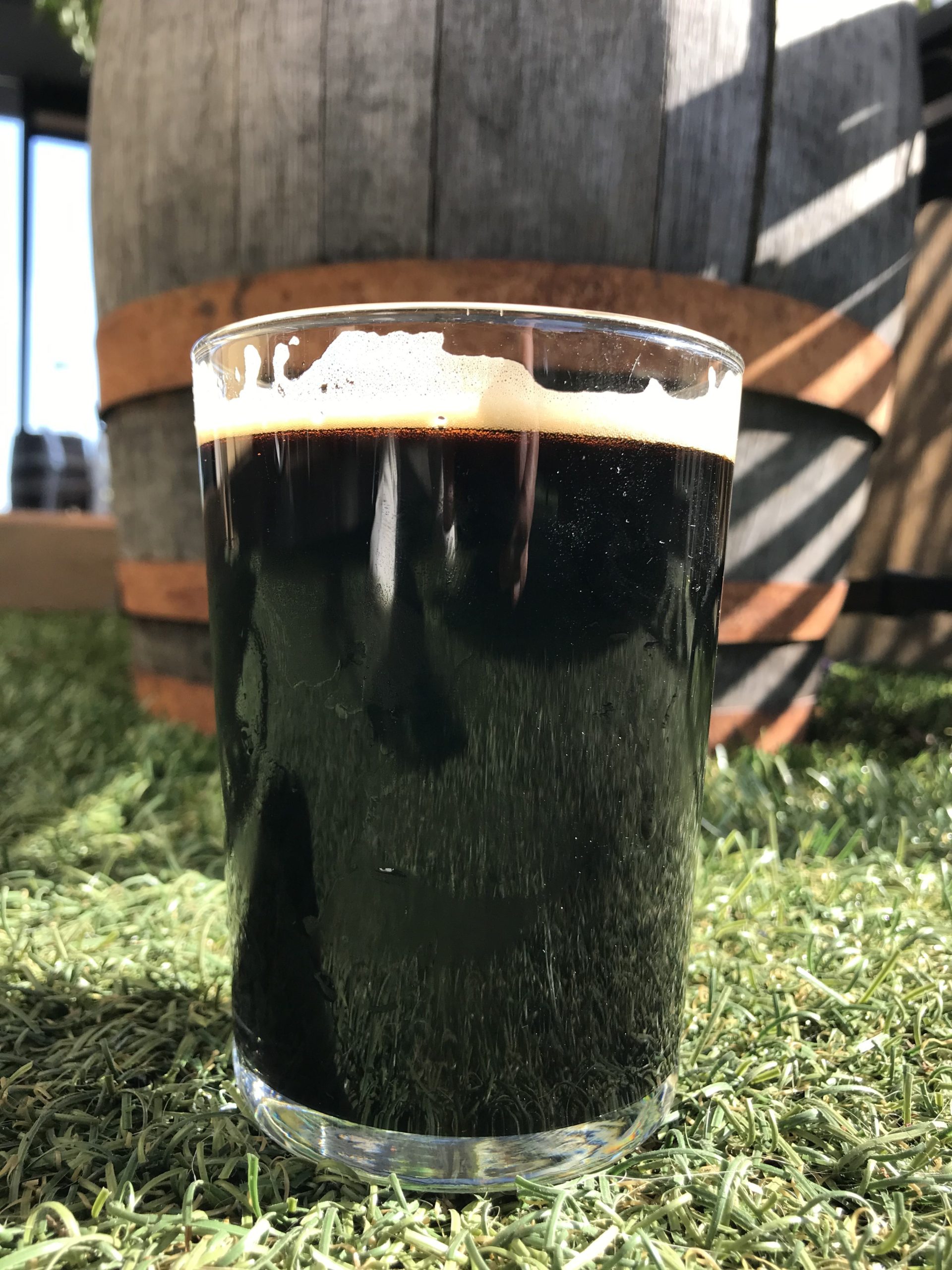 JMC (Jenna’s Morning Coffee) Porter was my favorite brew of the day
(I’m a dark beer kind-of-gal). It’s a bold stout with boasting flavors
of Coffee and Chocolate.

Overall: This brew resembles a
boozy hazelnut-chocolate latte. Big notes of Coffee and chocolate with
a well-rounded finish.

Food Pairing: This beautiful
beer pairs best with a rare Ribeye. Forget the coffee rub, and grab
this silky, decadent coffee beer. Rich enough to stand on its own, JMC
makes a great dinner companion. However, it’s also a fabulous breakfast
beer, too.

Mastry's Brewing Co. is proud the be the first craft brewery and tasting room on St. Pete Beach.